God bless the work of Hidden Palace, the website that tracks down prototypes for both released and unreleased video games of the past. Who knows where they get it all, but Hidden Palace’s connections are deep enough that they’ve brought us in-progress versions of EVERY Genesis Sonic game, including the hog’s ’91 debut. The bundle they just dumped for New Years Day 2022 isn’t on THAT seismic level, but there are still a lot of rare finds here, some for games that no one knew existed before. 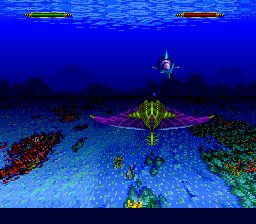 MER WARS: A Super NES game that makes heavy use of Mode 7 to create a pseudo-3D underwater battle zone. You play as some kind of stingray-shaped battle sub (or maybe an actual stingray) and you shoot at monsters while a creepy yet catchy atmospheric melody plays in the background. It is unknown what Mer Wars is, or how close it came to becoming a real product, but since the game here is one endless level, it’s believed to be little more than a pitch or a tech demo.

DUNGEON WARRIOR: 3D maps on the Game Boy were certainly possible — as long as you were fine with a lot of compromises! This dungeon crawler takes the approach that a lot of PC games like it did back in the 80s by showing a first-person perspective one drawing at a time. You turn your head and SNAP, a different drawing from 90 degrees. This would’ve been a cool game to have on the school bus….pity that was never the reality.

JET PAK JAK: While some of these are missed opportunities, there are others where the rejection by their publisher is obvious. Jet Pak Jak seems like a fine sidescrolling maze game, but apparently EVERY time you turn it on, you’re greeted with a slow-moving text scroll explaining the backstory of the game, who the enemies are, and how to play. There’s a reason this stuff was saved for the manual! A revised version called Jet Pak Man was also uncovered without the intro, but it wasn’t enough to save this one.

SAN FRANCISCO RUSH: VERY interesting Game Boy Color port of the console game that attempts to render fully 3D track environments. The results look hideous by modern standards, which is probably why this never saw the light of day, but it’s still amazing what they COULD pull off on this thing.

Over 100 protos are now downloadable at Hidden Palace. See what you can dig up!

Last week we reported on a Zelda-inspired (Link to the Past in particular) adventure game called Airoheart. It’s being developed by the Australian indie team Pixel Heart Studios, and their 2020 Kickstarter campaign raised $28,492 Australian dollars, or $20,534 in US currency. Now, as the game barrels toward its intended

MorpheusZ Games has announced the release of their puzzle platformer, Time Master, to Steam. Zeno is a master wizard, but prone to getting frustrated. One day he got so fed up with his sister that he threw her into a prison vortex. Then he thought “maybe I shouldn’t have done

Cuphead and his pal Mugman, they love to roll the dice. By chance they played the devil’s game, and gosh, they paid the price! PAID THE PRICE! Sudio MDHR’s Cuphead is an amazing game, and shortly it will be (hopefully) an amazing TV series. Netflix released the long-demanded trailer this