Netflix renews Alice in Borderland for a second season

Stay tuned on the second season of Alice in Borderland! pic.twitter.com/ooeyFAWNTx

It is rare to see a live action adaptation with approval of fans. Alice in Borderland is a game changer so a second season is imminent.   Just look at its rotten tomatoes score.  It got the approval of both fans and critics. 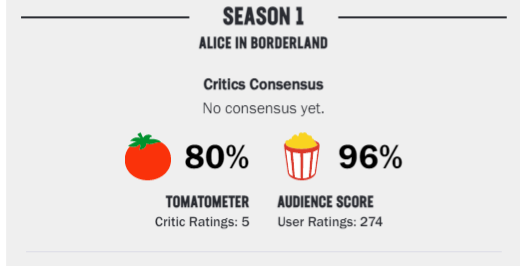 Live-action adaptations of Manga always get a bad rap. They translate well in Anime but not with screen actors. There are things that just look silly in live action. Most Japanese live-action have cheap CGI due to lack of budget. People complain about the special effects because of low budget CGI.

Meanwhile, western adaptations have the problem of Whitewashing. To make it worst directors and producers have too many creative liberties. I still can’t forgive Fox for Dragonball Evolution. I hope Amazon Prime will step up with it’s live-action adaptation of Promised Neverland.

This Japanese Netflix original managed to have a big enough international following to justify a second season. This science-fiction survival thriller is a live-action adaptation of a manga of the same name.

Mangas are more suitable for TV series than a movie because it is hard to condense multiple chapters in a 90 minute film.

The series is about Arisu and his friends who got transported to a different world.  They have to play a game of Survival that could lead to their deaths. If you enjoyed Battle Royale, Saw, Hunger Games, Survivor and Danganronpa, you will like this series. I know that sounds like a weird mix to be compared with but it is something you can binge in day.  It is a Twisted take on Alice in Wonderland.

The premise seemed dark and gloomy but  this show is not depressing to watch because it has some funny moments. It has a great balance of different emotions. The unpredictability makes it worth watching too.