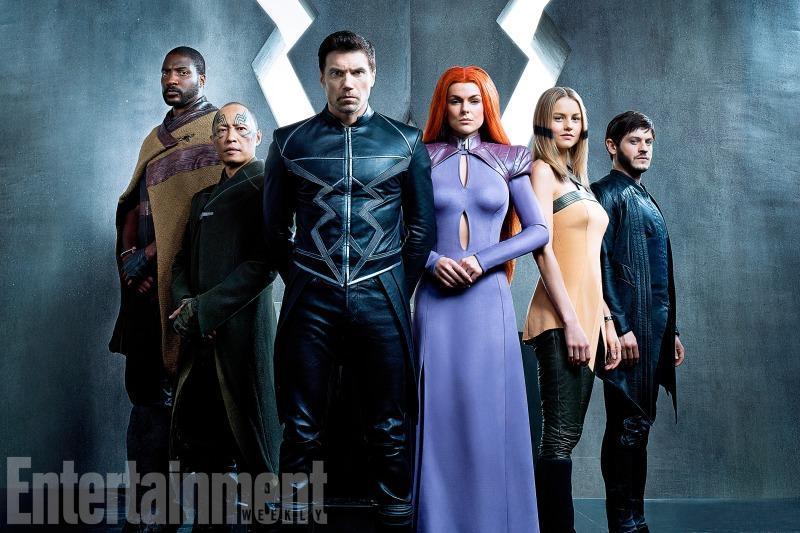 This image is not going over as well as the Runaways image did. Fans familiar with the Inhumans are griping that it looks cheap and the costumes are ridiculous. Getting the most heat is Medusa (the one in the purple), typically depicted with a gigantic mane of living red hair. Here it seems disappointingly lifeless. Showrunner Scott Buck is already in apology mode about the hair, telling EW.com “It is very difficult. Even now, it’s still a process. It takes quite a long time in post to make that effect work. We have some of the best visual effects people available working on our show. We still haven’t seen the final version of it; it’s very much a work in process.”

Those who watch Agents of SHIELD are already familiar with Inhumans — people with half-alien DNA who transform through a process called “terragenesis” and gain super-abilities when they emerge. The Inhumans actually have a center — a Royal Family — and it is them in the above shot. Buck describes the tone of the show as a “family drama,” but we’re sure there will be more of an emphasis on action and less on reckless teenagers breaking curfews. We hope.

ABC is taking unprecedented steps with Marvel’s Inhumans. In addition to the high SFX budget required to get things like Medusa’s hair working, the first two episodes are going to be literally released in movie format, on the big screen. And when I say big screen, I’m talking IMAX. The pilot is being shot in this expensive format.

ABC still hasn’t released their fall schedule yet and we don’t know if Agents of SHIELD is returning, but it would be asinine to replace what has recently been on an all-time narrative hot streak with something completely unproven, no matter how much cash you’re willing to blow on it. We take all this Inhumans news as confirmation that SHIELD won’t be dumped, and we hope we’re not wrong.