Mad Genius is flashy combo of hard sci-fi and social media savvy from writer-director, Royce Gorsuch that will take you on a reality bending journey that pushes the limits of the human mind. It’s a film that asks you to consider what would you change about humanity if you could reprogram the entire population. Will you love or hate the film? Find out in our Mad Genius Movie review.

Despite the slick, modern sheen of Mad Genius, one can’t help but see parallels to 1995 film Hackers in its presentation of a tech-savvy underworld inhabited by youthful computer prodigy punks who do lines of designer drugs in between creating lines of code that will change the world.

That’s not a bad thing however, Hackers was ahead of its time in predicting human dependency and connection to the online world, so who’s to say Mad Genius isn’t giving us a glimpse into that next step we haven’t yet accepted.

Here’s the official plot synopsis: Mad genius and hacker, Mason Wells has a mission to “hack the human mind” in order to save humanity, but first must reconcile his multiple alter egos. As their mission reaches the brink of danger, they become hunted by a nihilistic madman named Eden after they steal his technology and discover that he is working on the exact same project that they are. Ultimately, Mason discovers the only way to defeat Eden may be the ultimate hack, one he never thought imaginable. 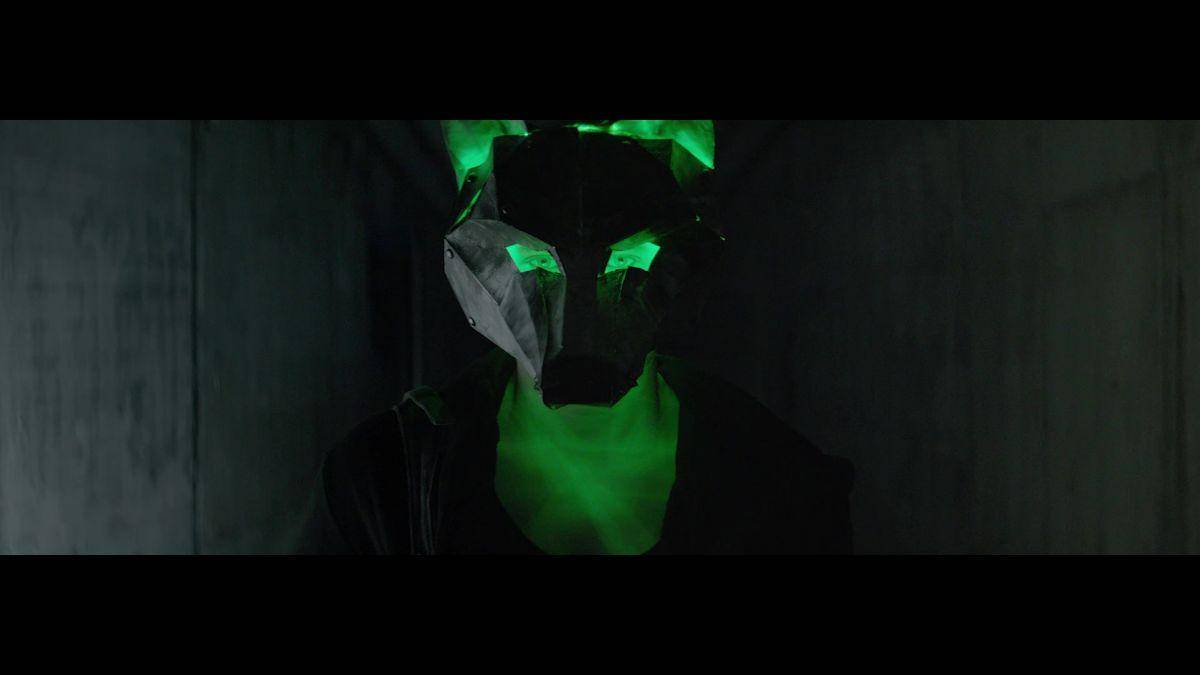 Right off the bat Mad Genius pulls you into the online world of its protagonist Mason (played coincidentally by Chris Mason) aka Mr. VIX, a fox mask wearing YouTuber with plans to “fix” the human problem. From the safety of his laptop Mason pontificates about the potential of the human brain, as if he has it all figured out, but it’s what happens when he turns off the camera that gives the audience pause.

You see Mason has an imaginary friend named Finn (Scott Mechlowicz) with whom he debates his plans for mapping the human brain into code that can then be re-written to fix the destructive nature of Earth’s population. Finn and Mason’s relationship is less Drop Dead Fred and more Fight Club in reverse. Mason is aware that Finn is a construct of his mind with an edgier personality and allows that manifestation to push him past his own comfort zone.

The relationship between these two actors is the core of the film and they are fantastic together. Mechlowicz spews out loveable venom and smarmy commentary at his “mind-partner” as he tries to convince Mason to get out of his own way in fulfilling his mission. Meanwhile, Mason (as Mason, very confusing) maintains a self-serious determination that masks his own fears. It’s as if the odd couple share one mind, instead of a one bedroom apartment.

Gorsuch has scripted some fantastic banter that is shot in such a way as to give the film a sense of momentum instead of stopping dead for exposition. Great use is made of the Los Angeles street locations, as well as the interior sets designed to pull you into the psychedelic world of the this online rebellion. 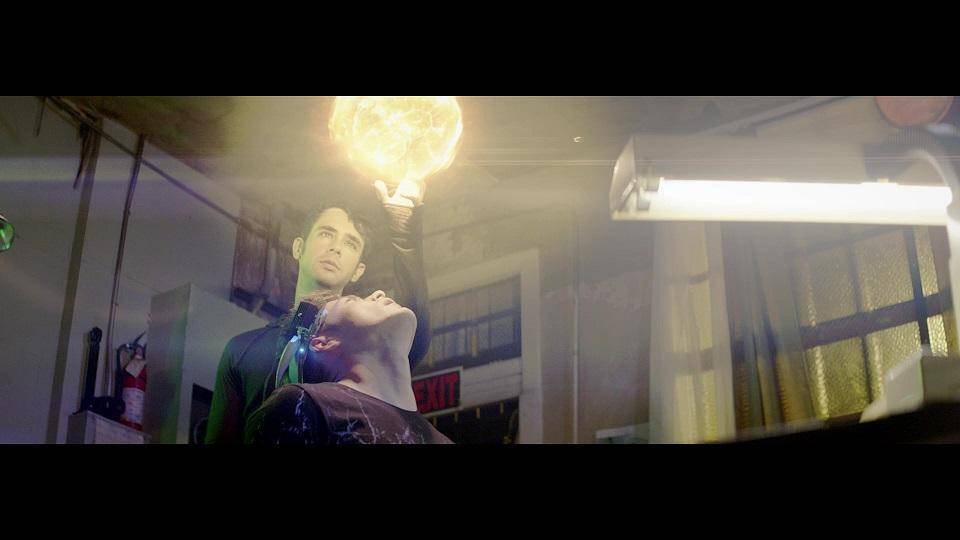 One of the strengths of Mad Genius is that it presents a unique reality with its own rules and a cast of characters who fit perfectly into that world. The geography is small, but the scope of the ideas are global and even metaphysical. This is the core of all great science fiction, presenting a strong philosophical challenge and discussing the answers with some outlandish trimmings.

The antagonist of the film comes in the form of Eden, portrayed by veteran character actor Faran Tahir. Like the Yang to Mason’s Yin, Eden is on a similar path to make the world a better place, yet his methods are seemingly less altruistic. Using intimidation and hi-tech torture devices to find Mr. Vix who has stolen a brain-mapping device from Eden, it’s as if Tahir’s character from Iron Man merged with Tony Stark into a single, dangerous villain.

On the flipside is Spencer Locke as Sawyer, a love interest of sorts who wafts through Mason’s life like a summer breeze. She’s his muse in a manner of speaking, constantly appearing out of nowhere or in romantic visions that contrast against the darkened mindscape Mason inhabits. Locke brightens up the screen time and again as she releases Mason from capture throughout the story.

There’s a Pinocchio-esque plotline in play as well when the code is cracked and Mason actually manages to manifest Finn into a physical form. Soon there is conflict between the two who were one and Mason’s motives are called into question by the being who actually knows his mind. Enamored by the pleasures of the flesh, Finn goes on a bender that is very entertaining and presents yet another hiccup in Mason’s plan to change the world. 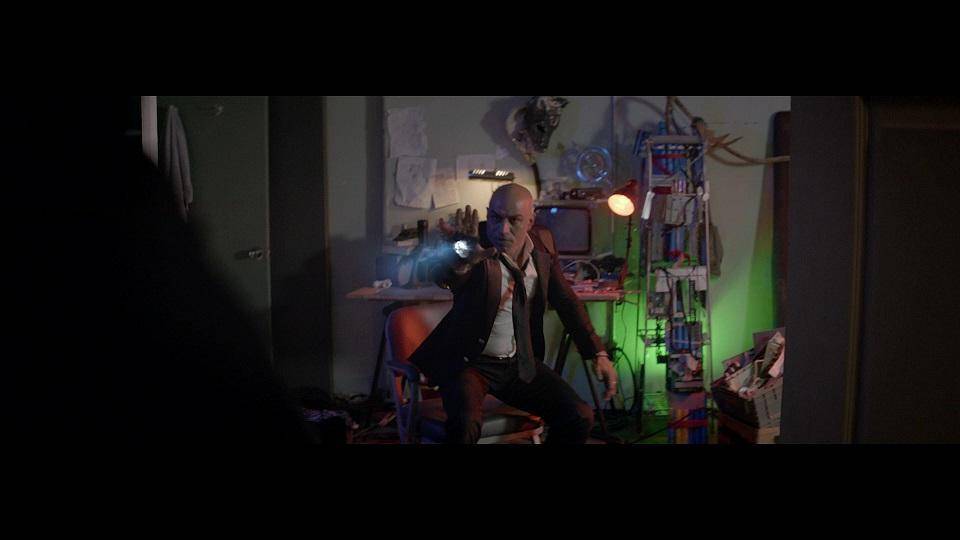 The final showdown between Eden and Mason has some interesting twists that will leave you guessing at the outcome until the last second. Tahir has a chance to do some mustache twirling while still maintaining his menace as some interesting effects work plays with the audience perception of reality.

Mad Genius is a sleek, sexy sci-fi tale that stands out from the rest. Gorsuch manages to craft an engaging story on the page and translate it to the screen as an excitingly original visual landscape. With two charismatic leads carrying the film and a supporting cast to fill in the neon corners of this hyper-reality, you’ll get your money’s worth with Mad Genius.