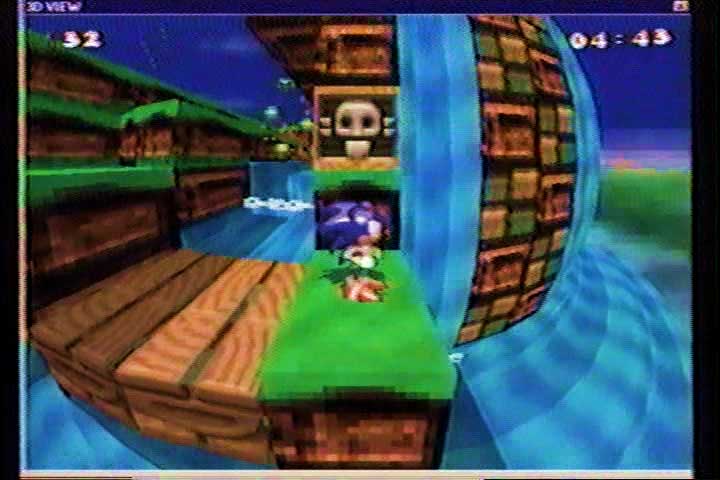 There are many reasons why the Saturn failed in America, but chief among them is the curious absence of a proper game in the mainline Sonic series. The isometric “Sonic 3D Blast” was a placeholder for a game that was never completed, and was to be the Saturn’s big Sonic title: Sonic X-Treme.

If the title isn’t 90’s enough for you, the graphics will hammer it home. Sonic X-Treme was to be the hedgehog’s introduction into 3D, bopping and racing along rotating tracks, with a fisheye lens camera aiding the player’s peripheral vision. This game would have also introduced the characters of Professor Boobowski and his daughter Tiara, who, alas, would fall into the cracks of time and never become ignored options in a Gamecube Sonic racing game.

Internal politics at Sega slowed development and in some cases made it go backwards. Sonic X-Treme was on life support until the very end, at the time of its cancellation being directed by two remaining men, who had become ill from the exhaustive work. The game was canned so late that promotional box art was already in existence, as well as Sonic Christmas Blast, a holiday special that was originally named “An X-Tremely Sonic Christmas.”

According to this video, the original code for Sonic X-Treme was handed off to a different developer in 2010 with the hopes of basing a new game on it. Those plans fell through and the code fell into the hands of a few Sonic fans, who got to work restoring it and getting it to function on PC. Porting Sonic X-treme is X-tremely tough due to the Saturn’s use of quads(rectangles) as polygon shapes instead of triangles(what every single other 3-D graphics engine uses). But as the just-released demo proves, it can be done!

The intent is to come as closest to what would have been for sale at Funcoland in 1996 as possible, meaning there will be pixels and they will be big. Don’t expect it finished tomorrow, but if they pull it off, it’ll be a nice restored bit of history to futz with.