Don’t let the name fool you, while The Jurassic Games may sound like a slapped together title meant to cash-in on the popularity of The Hunger Games and this summer’s Jurassic World: Fallen Kingdom, ignoring this balls to the wall thrill ride from Emmy winning director, Ryan Bellgart would be a dino-sized mistake. Hold onto your butts because The Jurassic Games is 100 percent rampaging fun from start to finish.

There have been many films over the years that played with the concept of deadly survival competition as televised entertainment for the masses, be it Paul Bartel’s Death Race 2000 in the 70’s, Schwarzenegger’s The Running Man in the 80’s or more recently Neveldine and Taylor’s certifiably insane movie Gamer with Gerard Butler. Each served as an indictment of exploitative media culture and greedy network tactics to get ratings, but you know what they didn’t have? DINOSAURS!

In actuality, the lethal thunder lizard attacks (and there are many) are not really the main draw of the story as conceived by Bellgart and Galen Christy, which was a nice surprise. It’s not that The Jurassic Games is a case of false advertising, more that the film has so many other levels of fun to offer. But before we break down this deadly game with a play by play analysis, let’s learn the rules of this twisted universe.

Every year, 10 of the world’s most lethal death row criminals are chosen to compete for their freedom in The Jurassic Games, a television show where contestants must survive against a variety of ferocious dinosaurs. The players all die gruesomely in the game zone except for one, the last one standing, the winner, who is granted not only his freedom, but fame and fortune. Survive the dinosaurs. Survive each other. Survive…The Jurassic Games. 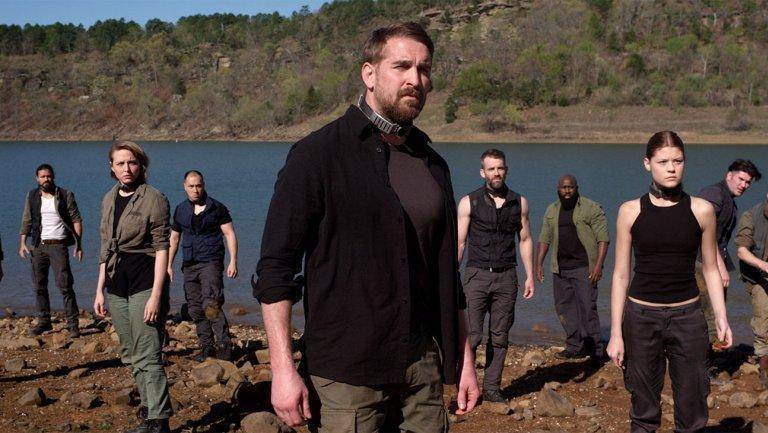 It must be said first and foremost that director Ryan Bellgart knows how to shoot a film in an exciting way. With engaging camera angles, expert lighting and varied lense techniques, The Jurassic Games is a slick production that is far from your usual low-budget indie fare. The casting director deserves a lot of credit as well, since every role is perfectly inhabited by the actors.

With every contestant on the show being a convicted killer, you can imagine that we’re bound to have some eccentric folks in the line-up and while there’s not enough space to get into all ten, there are a few stand-outs that deserve to be mentioned.

Our protagonist, Anthony Tucker is played with nobility and sincerity by Adam Hampton, who deftly balances the tragedy of a husband falsely accused of killing his wife with the determination of a father who will push through all obstacles (human and dino) in order to gain the freedom necessary to return home to his children. Looking like Steve Rogers’ stunt double from Avengers Infinity War helps Hampton to sell his many action scenes as well.

Adding a touch of crazy to the proceedings is Luke Wyckoff as the cannibal, Albert, who is constantly trying to take a bite out of everybody and quite pleased with how they taste. With his wiry, twitchy, off-kilter manner, Wyckoff is reminiscent of another familiar face from Marvel Cinematic Universe, Sean Gunn’s quirky ravager, Kraglin in Guardians of the Galaxy. While Albert adds some menacingly comedic unpredictability to the games, there is another wild card in the bunch.

Katie Burgess as the demented teenage psychopath, Joy is mysteriously aloof throughout the games, avoiding alliances, while constantly taunting Tucker with promises of killing him in the final round. It becomes clear that she is more than capable of carrying out these threats as well, cleverly setting traps for man and beast alike, while getting in her fair share of scrapes. Burgess conveys the broken psyche hiding behind her stone-faced scowls effectively and proves to be more fearsome than the hungry creatures on the hunt in each kill zone as the games progress. 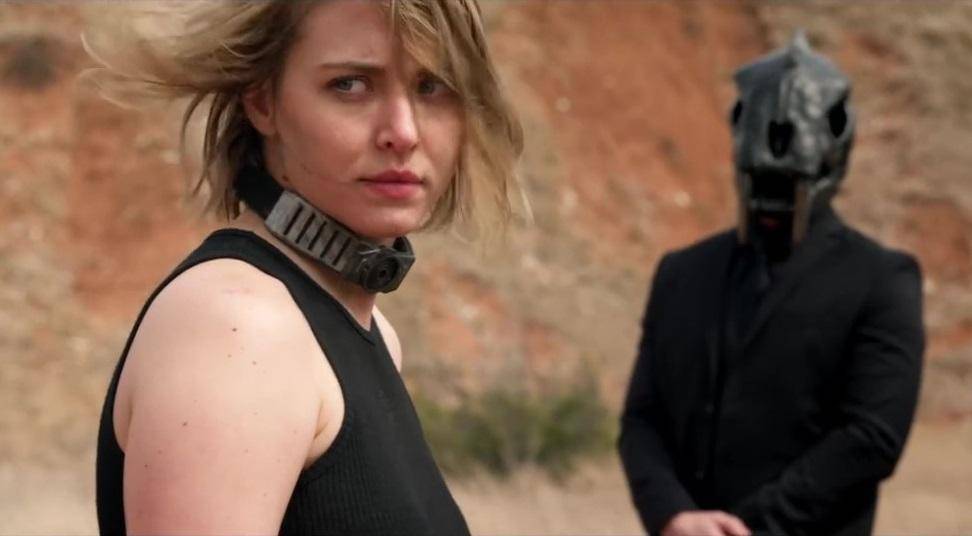 The game scenario concepts themselves are another strength that enhances the viewing experiences. It would have been very easy to just throw the competitors into an open world scenario and wait for the carnage to ensue, instead they move from outdoor survival goals with land mines and pterodactyls to an indoor maze environment with puzzle solving and Raptors on the hunt. 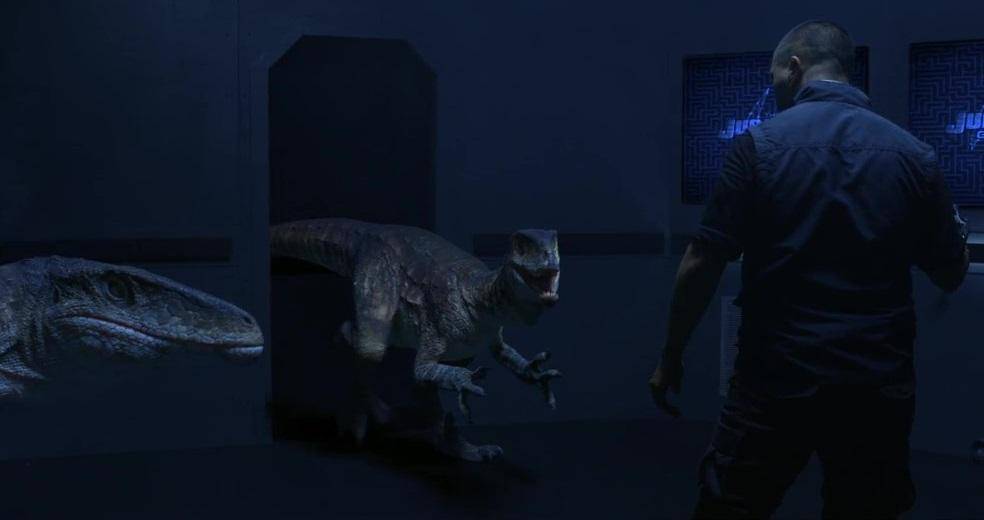 The latter leads to an unforgettable moment where Tiger Sheu as Ren engages in a a kung-fu rumble with a trio of killer dinos that you will have you chuckling and cheering at the same time. It’s this kind of inventiveness and acceptance of ridiculous action that is missing from most adventure films. 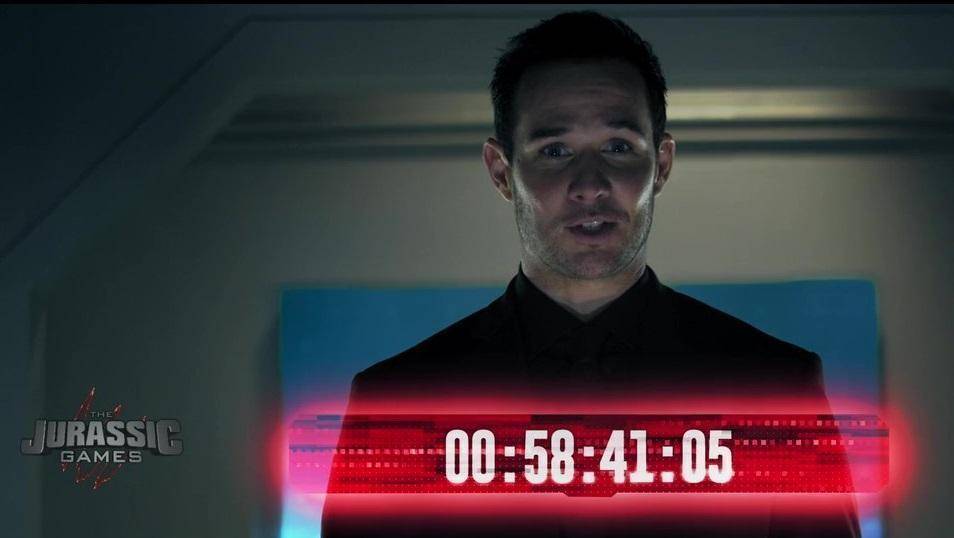 Introducing the precarious situations to Tucker and the others is the endlessly entertaining Ryan Merriman as The Host. Taking a page from Richard Dawson’s Damon Killian in The Running Man, Merriman is the affable guide to the games on camera, and a calculating sleazeball behind the scenes. 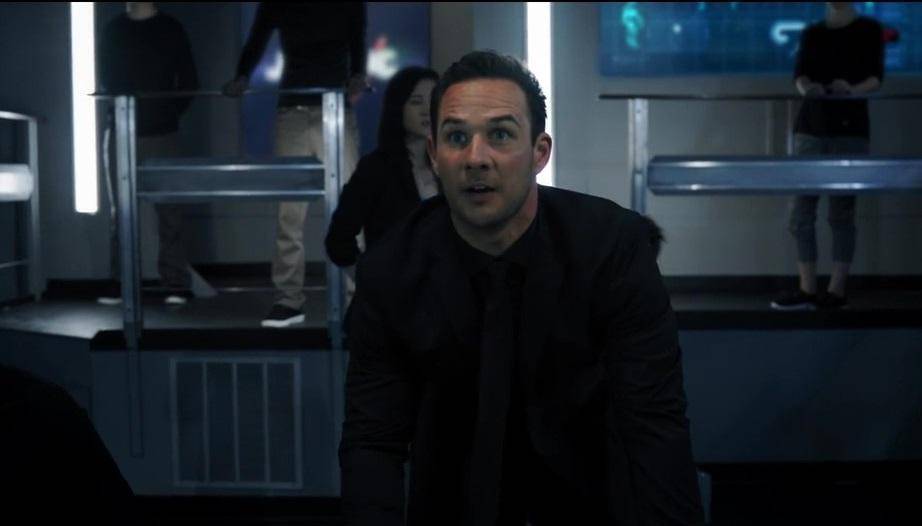 He’s basically an evil Ryan Seacrest (which may be an oxymoron depending on how you feel about American Idol), but is easily the most likable character in the film. His ultimate fate feels slightly undeserved because he plays more as a silly rascal, than a devious mastermind. 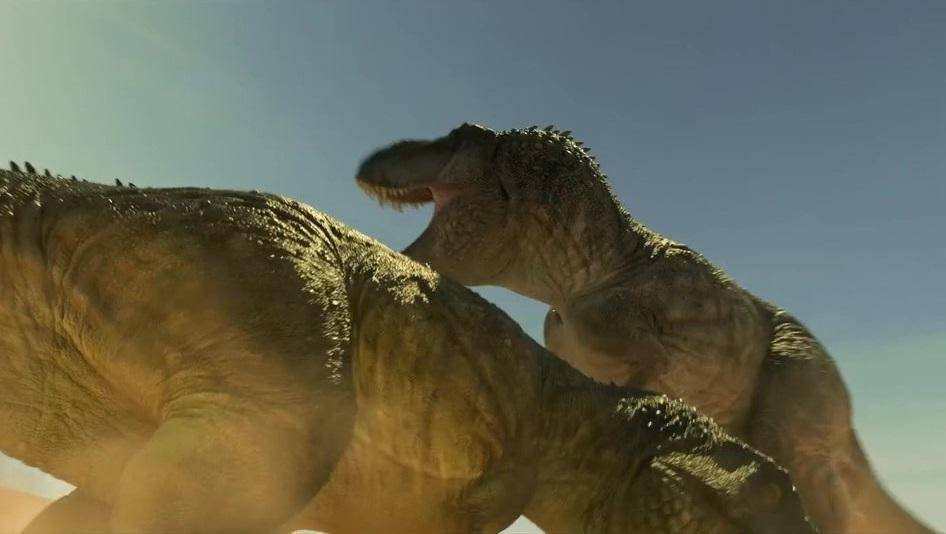 So by now you’re probably wondering about the special effects and why I haven’t mentioned how the dinosaurs look in more detail. The truth is, that the dino-stars are Discovery Channel level fine in their rendering and in no way take you out of the story. The only moment where the CGI fails is as one character called The Wasp is almost eaten by a man-eating plant that looks like a rejected scene from the 90’s crapfest Anaconda. Otherwise the digital enhancements are just that, a little icing on the visual cake.

The Jurassic Games also balances its comedic and emotional moments expertly. There is a touching moment where Tucker speaks to his kids through the television telling him that he is coming home. This scene could have come off as melodrama, but Hampton manages to play the genuine emotion of a man’s desperate need to get home to his family. Though this is primarily an action film, character beata like these invest the viewer more completely in the emotional battles being fought. 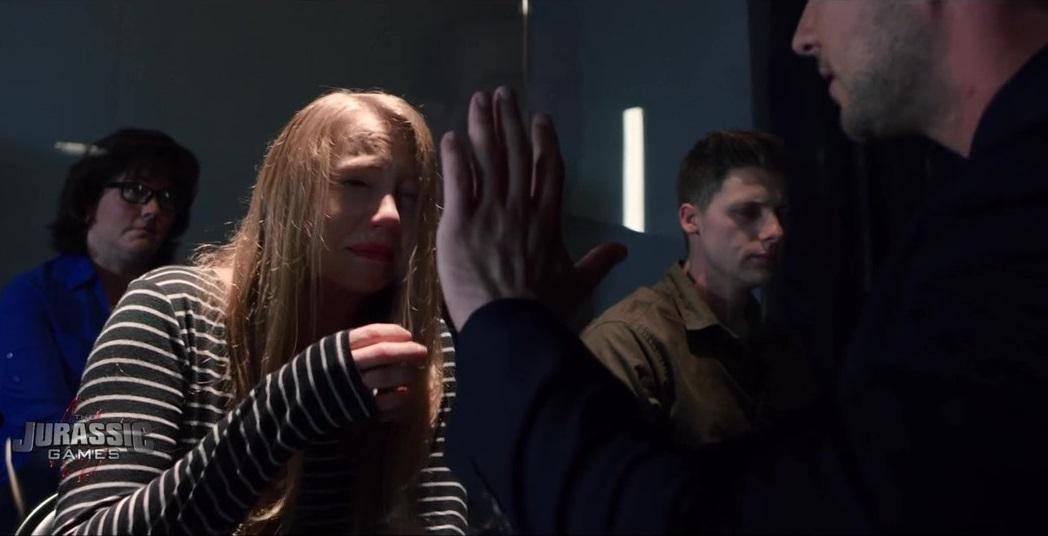 As if to turn that scene on its head, The Host at one point is interviewing a woman in tears, claiming to be overcome with relief at seeing her husband’s killer annihilated through the Jurassic Games, justifying the societal benefit of the show. But as soon the cameras are off The Host is instantly applauding her acting skills, feigning his own emotion at her grand performance. The disingenuous duality of the moment is quite funny and a winking nod to the truth we all know about how reality television is produced. 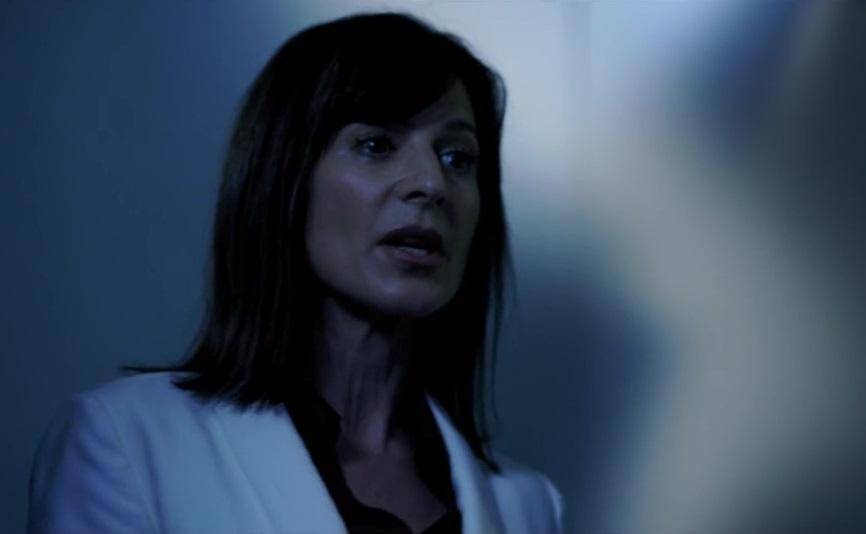 There is a sub-plot running through the background about a resistance movement to The Jurassic Games called The Cavemen who promise to disrupt the finale and bring about the downfall of this barbaric, but publicly accepted program. It’s a nice wrinkle in the plot that harkens back to The Running Man once again, but its not terribly engaging. Luckily not much screen time is spent on the infiltrating reporter played by Erika Daly, though her scenes spent verbally sparring with the network executive played by Perrey Reeves are well played.

The finale of the film is an exciting showdown between the 2 surviving contestants that involves a shocking reveal about the true murderer of Tucker’s wife. Though without a motivation for the killing being explained, the emotional component falls flat. But despite this, the execution of the climax is very satisfying. 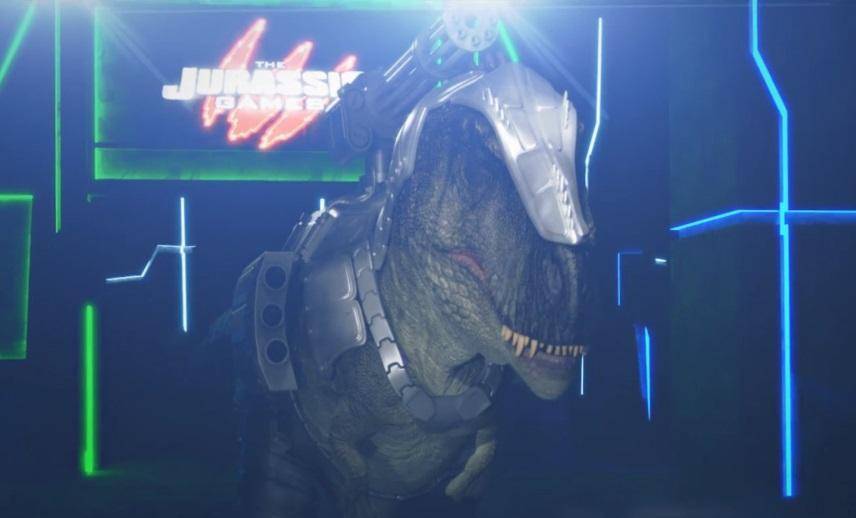 As a final treat, fans of the late 80’s toy line Dino-Riders will get an extra thrill in the closing promo for the next season of The Jurassic Games, where the dinosaurs are given an upgrade that will have you howling with laughter while pumping your fist in the air. 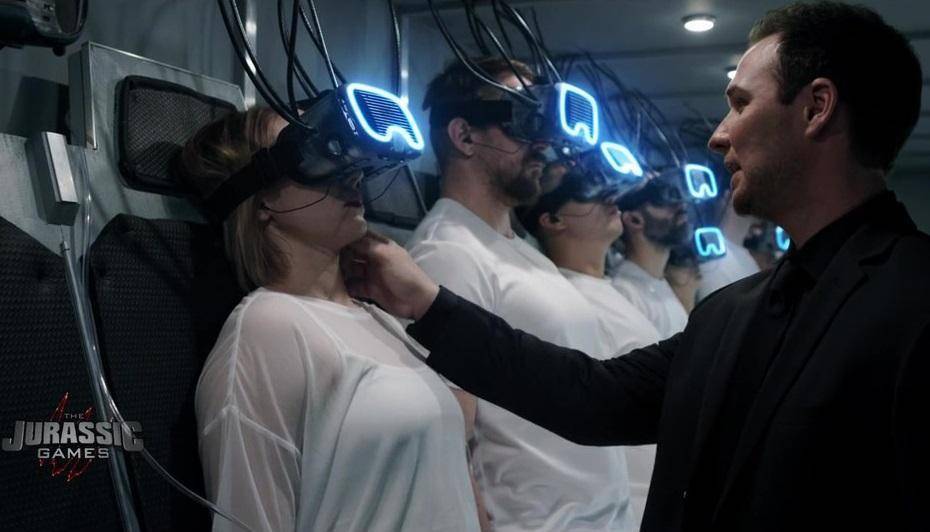 When it comes down to it The Jurassic Games is just a fun time at the movies. The concept may not be cut from whole cloth, but the personal flair of the filmmaker is a stylish twist on an old favorite. Everyone from the director to the cast take the material seriously, which helps to create a consistent tone of outrageous adventure. 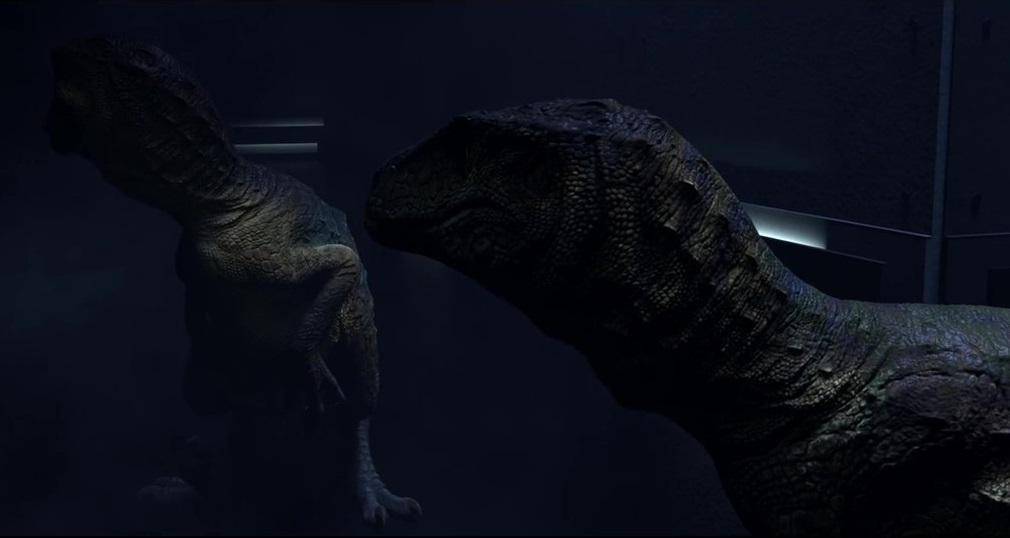 The Jurassic Games is available on Digital 6/12 and DVD 7/3 from Uncork’d Entertainment.