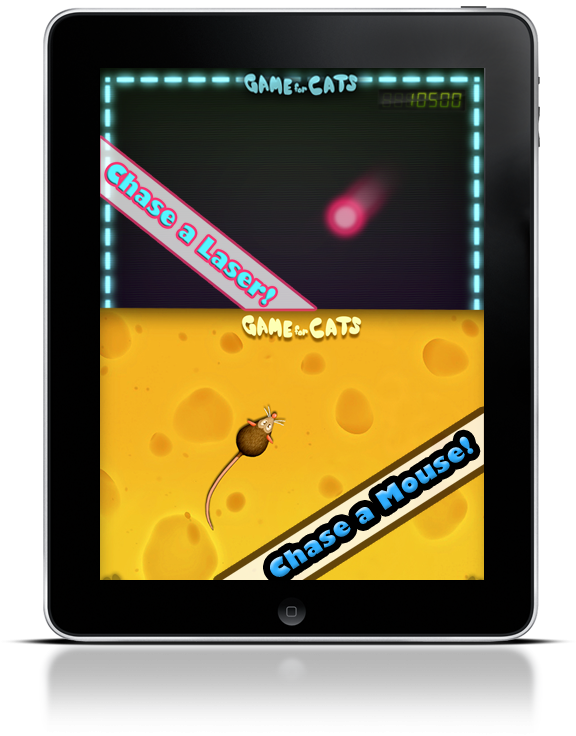 While my husband and I were hanging out with some friends, the discussion drifted towards our respective cats. They had mentioned one of their cats absolutely loving an app on their iPad and whipped it out to demonstrate. Sure enough, the cat went nuts for it. Staring intently and pouncing.

Obviously, being as doofy as I am, I wanted to see what our cats did with the marvel of technology. Our two contestants are Max and Patches. Our two apps are Game for Cats and Fun and Games for Cats. There were other apps tested for the sake of being thorough, but they were terrible, so I’m not going to spend time on them.

Contestant #1, Max, was eliminated for his unwillingness to participate in the competition, I assume in protest of the paralysis caused by the extreme partisanship in our government.

Contestant #2, Patches, was much more willing to participate and gave both apps a thorough work out.  I should preface this by mentioning that Patches was an outdoor cat and likes to hunt. He once caught a pigeon in mid-flight.

No iPads were damaged during this test. Or cats.

Game for Cats comes with three levels. In one, a laser pointer moves across the screen, in the other two, a butterfly and a mouse. Patches is entirely uninterested in either the laser pointer or the butterfly. He will, however, play around with the mouse level.

Here is someone else’s cat playing Fun and Games for Cats:

The Winner: Fun and Games for Cats

The game kept Patches’ attention for much longer and made me question reality with Cat Music Game. There’s no true need to own either app, but if you would like to do something with your cat that doesn’t involve it silently mocking you as you run to fetch the ball you had tossed with the intention of it fetching, this might be some fun. Both games are available on iTunes or directly through the App Store on your iPad.