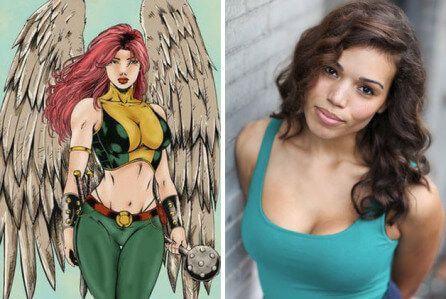 This isn’t confirmed as of yet, however, if past decisions are any indication, it would not be all that surprising. When DC/CW announced Legends of Tomorrow, there were a few surprises that were shown, not the least of which were the inclusion of some brand new characters for the team-up show that hadn’t been on either Arrow or Flash (at the time). One of these was Hawkgirl, a character with a lot of DC Comics history and fan appreciation. It was clear (at the time) that this would be our true introduction to Hawkgirl (played by Ciara Renee), Rip Hunter, Vandal Savage, and more. Except now, that may not be the case for Hawkgirl.

SpoilerTV is reporting that The CW is in “early stages” of making a Hawkgirl solo TV series. It’s still unclear where this would take place chronologically, aka before or after Legends of Tomorrow, or even when it would air, specifically before or after Legends of Tomorrow. If this does happen, this would be the second CW series to have a female lead, and the third superhero series for DC to have one following Supergirl (which airs this fall).

The real curious thing is that SpoilerTV notes that CW might bypass the pilot stage and go straight to a full season order. That’s a risk, as you’ll recall that Barry Allen appeared in a two-part arc in Arrow before making the jump to a series. True, if this is made after Legends of Tomorrow, they’ll have a little more leeway, but that’s still a ways off.

Legends of Tomorrow, featuring Hawkgirl, is set to premiere on The CW later next year.