If you want an arcade machine that plays Star Wars, just ignore AtGames’ suspicious “Legends Ultimate” cabinet and feast your eyes on the newest offerings from Arcade1up. A Star Wars cabinet was revealed on the show floor today, along with cabinets for the Teenage Mutant Ninja Turtles and Marvel properties.

First, Star Wars. The cabinet was announced months ago, but this was the first time anybody got to look at it….and it’s mighty sweet, recreating the vector-age original Star Wars arcade stand-up perfectly. The Arcade1Up version also contains the arcade versions of The Empire Strikes Back and Return of the Jedi. 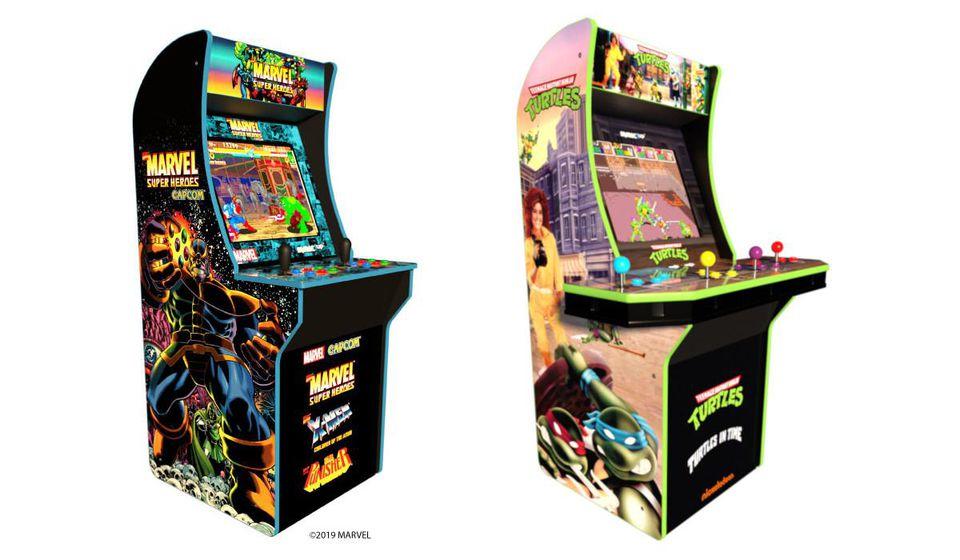 WELCOME TO DIE! The Marvel arcade machine contains X-Men: Children of the Atom, plus the lesser-known Marvel Super Heroes and The Punisher games. Seeing as the Capcom brand is already stamped on the unit, I would have gone for any Marvel vs. Capcom game instead.

The Teenage Mutant Ninja Turtles arcade cabinet is one of the most iconic, with its painting of a model representing April holding a camcorder. Unfortunately just two TMNT arcade games were ever created in the golden age, so your selection on this machine is smaller. It doesn’t help that the TMNT machine actually costs more — $349 as opposed to Marvel’s $299. However, it IS the first Arcade1Up machine to support FOUR SIMULTANEOUS PLAYERS.

Also announced by Arcade1Up, but not on the show floor, are two upcoming 2-player cocktail tabletop machines containing properties by Capcom and Namco respectively. The Capcom machine will have twelve games including Street Fighter II, Final Fight and Darkstalkers, while the Namco machine will include Pac-Man, Galaga and Dig-Dug. They will be on the expensive end of Arcade1Up’s product line at $499 each.