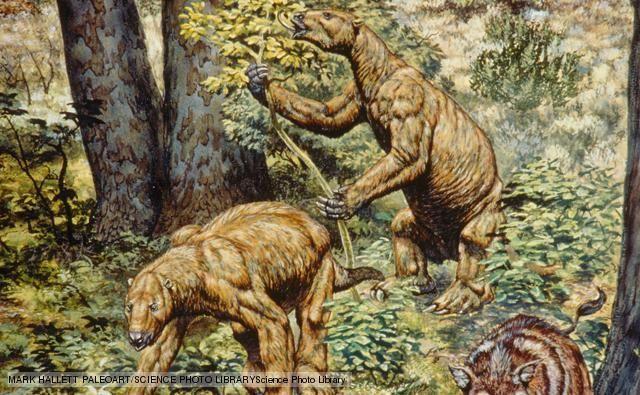 Scientists have solved the mystery of why so many animals died off during and right after the last ice age. And I have to say, it’s not looking very good for you, kid, I think we’re going to take a trip downtown. I’ve gotta go, too, of course, because the perp turns out to be the whole damn human race.

Researchers were curious why numerous species of large mammals, known as megafauna, died out during the last 100,000 years when similar die-offs weren’t found during other periods of climate change. Eventually, they had to turn and look in a mirror.

Researchers had considered that the global climate change in the ice age and at the end of it might have killed the large mammals by destroying their habitats. But the last ice age is just one in a series of ice ages, and there’s no evidence that similar die-offs occurred.

So they turned to the other theory, pleasantly named the theory of “overkill.” As man spread throughout the world, he either over-hunted the large animals or deprived them of their food sources, thus leading a wave of extinction wherever he went.

A tean mapped 177 extinctions of everything from the giant kangaroo to the giant sloth (pictured above) to the wooly mammoth. Climate change effects only correlated to these extinctions strongly in Eurasia.

But in the places where humans were expanding. Whoo, I hope you’ve got a good lawyer, kid. And give us all his number.

“We consistently find very large rates of extinction in areas where there had been no contact between wildlife and primitive human races, and which were suddenly confronted by fully developed modern humans (Homo sapiens). In general, at least 30% of the large species of animals disappeared from all such areas,” says Professor Jens-Christian Svenning, Aarhus University.