D23, the Disney celebration held every two years, had scores of announcements, many of which have been covered here. One thing that I noticed hasn’t gotten much coverage, though, is that The Great Movie Ride, one of the very last attractions left from 1989, back when the park opened as Disney-MGM Studios, will be closing down soon. It’ll be replaced by a ride themed to Disney Channel’s current Mickey Mouse cartoons (I mean Paul Rudish’s cartoons, not Mickey And The Roadster Racers).

Disney’s current deal with Turner Classic Movies to sponsor The Great Movie Ride will be ending in August. This is a few months after the last TCM Cruise was held on Disney’s Cruise Line, and it makes me wonder what will happen to the programming block Treasures From The Disney Vault, which currently airs every three months on TCM. These changes got me to thinking about how, slowly but gradually, Disney’s Hollywood Studios has been leaving behind 3rd party properties in favor of Disney’s own IP, and I don’t know if I like it.

For example, from the park’s opening up until the late 00s/early 10s, there was a store called Sid Cahuenga’s, which sold Hollywood memorabilia of all sorts, and not just Disney stuff. They also had lots of autographs for sale of stars of all types, from actors and actresses to singers and directors. You could even see autographs from Universal properties, like Steven Spielberg with E.T or Michael J. Fox on a hoverboard in Back To The Future, Part 2. Somewhere along the way, the backlot tour exited through a display of movie props put together by the American Film Institute. This leads us to 2014. 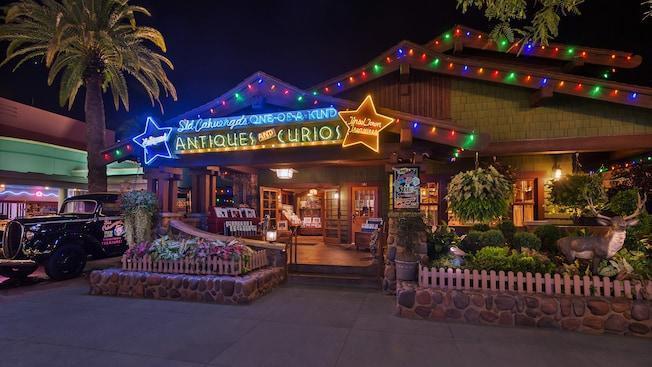 The MagicBand system had been in effect for several years, and Sid Cahuenga’s was transformed into a place where you could get more info about them. The autographs were moved to a different store further away in the park, and were connected to the AFI display. In 2014, the AFI display was full of costumes and props from classic movies, ranging from Michael Keaton’s Batman costume to Eminem’s hoodie from 8 Mile. I took pictures of many of them, and found them to be interesting.

I looked at the moved movie memorabilia store, and I was impressed by all the autographs they had. I’d never bought one of them before, and I had only started my autograph collection about a year or so prior, so I purchased an autograph of Tilda Swinton in one of Disney’s Chronicles Of Narnia movies, and was flirting with returning to buy an autograph of Jodi Benson as The Little Mermaid on a future trip. That wasn’t to be, though.

In between my 2014 and 2016 visits, the Frozen phenomenon had gotten so big that the store with the memorabilia shut down for a meet-and-greet. The AFI exhibit also closed in that time frame. The only autographs that can currently be found at Disney’s Hollywood Studios are Star Wars-related autographs. No Disney animated movie autographs, no Marvel autographs…Nothing but Star Wars, to paraphrase a lyric from one of the Nick The Lounge Singer sketches from Saturday Night Live. I was disappointed, but I had no idea why that happened until I started reading articles this year.

Basically, Disney executives have said that they’re looking to concentrate more on their own properties instead of third party material. While I know that Disney is in better shape now than it was in the 80s, when DHS first opened, I still find it sad, and a little hypocritical, that Disney’s Hollywood Studios will be impacted by this. The hypocrisy, to me, is evident in that Disney’s Animal Kingdom recently opened a land themed around the 20th Century Fox movie Avatar, which, unlike the Star Wars movies from The Empire Strikes Back to The Revenge Of The Sith, is still owned lock, stock and barrel by Fox. Why are third party properties okay at DAK but not DHS? I can’t honestly say that I know.

When it comes to Disney’s Hollywood Studios, the Rock ‘N Roller Coaster Starring Aerosmith and the Twilight Zone Tower Of Terror are remaining open for now, but it wouldn’t surprise me if Disney ended their deals with Aerosmith and CBS, the owners of The Twilight Zone, within the next year or two. The question is: What would they be rethemed to? Disney has a lot of properties for families, but not many for more grown-up audiences, especially with the unspoken end of their Touchstone brand. Perhaps they might do something Marvel-themed, but that would require a deal to be made with Universal to get the rights to non-Guardians Of The Galaxy Marvel characters on the East Coast.

With the Great Movie Ride only weeks away from closing, I must say that I’ll miss it. It was a wonderful journey through film, one that greatly inspired my own love of the medium. The montage at the end, which went through multiple changes during the ride’s time, was something exhilarating as well, expertly combining classic movie clips with classic movie music. All good things must come to an end, though, and with Disney wanting to focus on what they own as opposed to what they don’t, the end has come for The Great Movie Ride. I’m glad I got to go on it one last time when I went to Walt Disney World last year.

So, what do you think about the changes in store for Disney’s Hollywood Studios? Do you think they’re for the best, or will you miss the material from the outside?