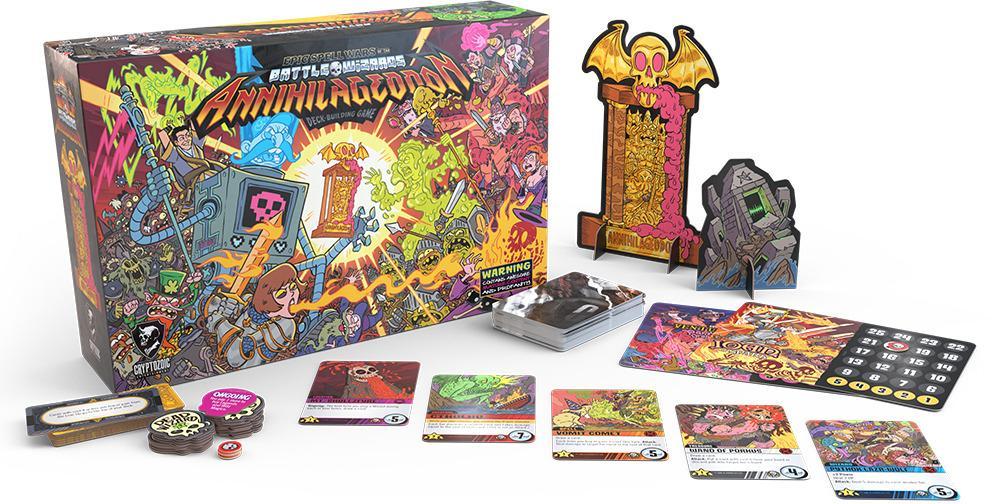 Tabletop card game makers Cryptozoic will be showing off their new lineup later this week at SPIEL 19, a convention in Essen, Germany. The aforementioned Batman Ninja Deck-Building Game will be there, alongside the company’s other DC offerings like Rebirth, and their lineup of Rick and Morty card games including the new deck based on the episode “Look Who’s Purging Now.”

Cryptozoic’s own Epic Spell Wars series is getting its first deck-building game, to go by the full title “Epic Spell Wars of the Battle Wizards: ANNIHILAGEDDON Deck-Building Game.” They’ll also have plenty of other titles from their past they still sell, like Pantone: The Game, available at the booth.

“Cryptozoic is thrilled to be attending the biggest tabletop gaming show in the world once again,” says John Sepenuk, CEO of Cryptozoic. “SPIEL is going to be a crowded event, so we’re looking to grab everyone’s attention with our major gaming brands: DC Deck-Building Game, Epic Spell Wars, Rick and Morty, and Pantone: The Game. We look forward to meeting all our fans in Germany and making lots of new ones when people see our games!”

SPIEL ’19 takes place from October 24-27 in Essen, Germany. It’s the largest board game fair of its kind, with over 1,000 exhibitors expected to take part.