Attack Of The Earthlings Review

The classic “invasion” storyline goes as such. Aliens invade Earth, Earth fights back, and eventually (9 times out of 10), the Earth wins and the aliens are driven away. It’s a classic tale. Attack Of The Earthlings though decide to switch things around. As an Earthborn corporation called Galactoil have landed on a planet that they REALLY shouldn’t have landed on. Now, yes, this may seem like other “classic” exploration stories but this has a twist. You see, these guys? They deserve to die. And you play as the Matriarch of a race called The Swarmers who are going to ensure their death.

That’s how Attack Of The Earthlings kicks off, with you as the Matriarch invading the giant space drill that Galactoil has landed on your world in order to siphon its resources for profit…because it’s a corporation…what else are they supposed to do? Anyway, as the Matriarch, you are your own literal base/spawn point. But, to spawn new units (other than yourself), you need to literally eat up all the workers and soldiers that are on the giant space drill. Once you have enough Biomass, you can spawn a variety of units (eventually) to help take them all down and then be rid of them on your world.

Attack Of The Earthlings plays very much like XCOM, or any XCOM-like games you might know and love. Every unit has a set amount of space that they can go in one turn. Doing special abilities (like consuming bodies) takes up that energy you have. Thus, every move is important, and mistakes can cost you units. There are special ways to get around the level that you can use, you can set traps for enemies or even team up to take down stronger ones, and all enemies have a line of sight that you’ll want to avoid. 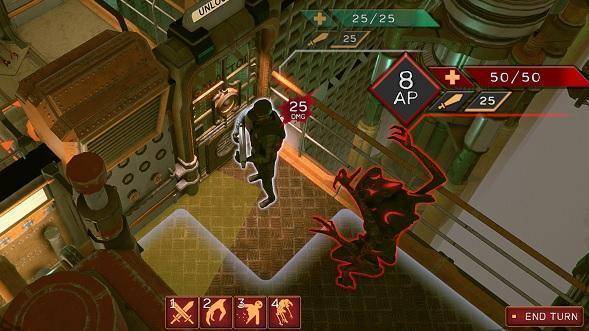 While this is very standard, the execution at times is somewhat lacking. Cause unlike XCOM, or Mario + Rabbids Kingdom Battle, Attack Of The Earthlings focuses more on stealth. And not because it’s a better way of playing the game, but rather, your units don’t have a lot of health, especially in the early levels. Your Matriarch can only take a couple of hits, and her spawn can only take one. While I appreciate the tactical value of trying to preserve your units, this does get tedious at times, especially when some of your enemies seem to have unfair advantages.

What’s more, this really brings the game’s pace down to a crawl. There’s no true tension as you’re honestly just trying to get from room to room to find your objectives and then execute them or destroy them. In the first official level for example, you’re trying to stop the power source for the drill. Once you take it out, you find out that there are two back up generators. Once those are taken out, some powerful enemies are brought in to “handle” the situation. On the surface, that doesn’t sound so bad, but when you actually play the game, it’s anything but. The second objective for example isn’t highlighted, so you honestly have no idea where to look except to wander around. I found both by accident in my runthrough. And when the “super guards” showed up? I couldn’t help but roll my eyes because I wanted the level to be over.

The other real issue here is that there’s honestly no replay value. There’s a set number of levels as you ascend the drill, and once you’re done…there’s no real reason to replay it. After all, the units you spawn are all going to be the same every playthrough. And there’s no personal connection to them as they’re just aliens who don’t speak any language. 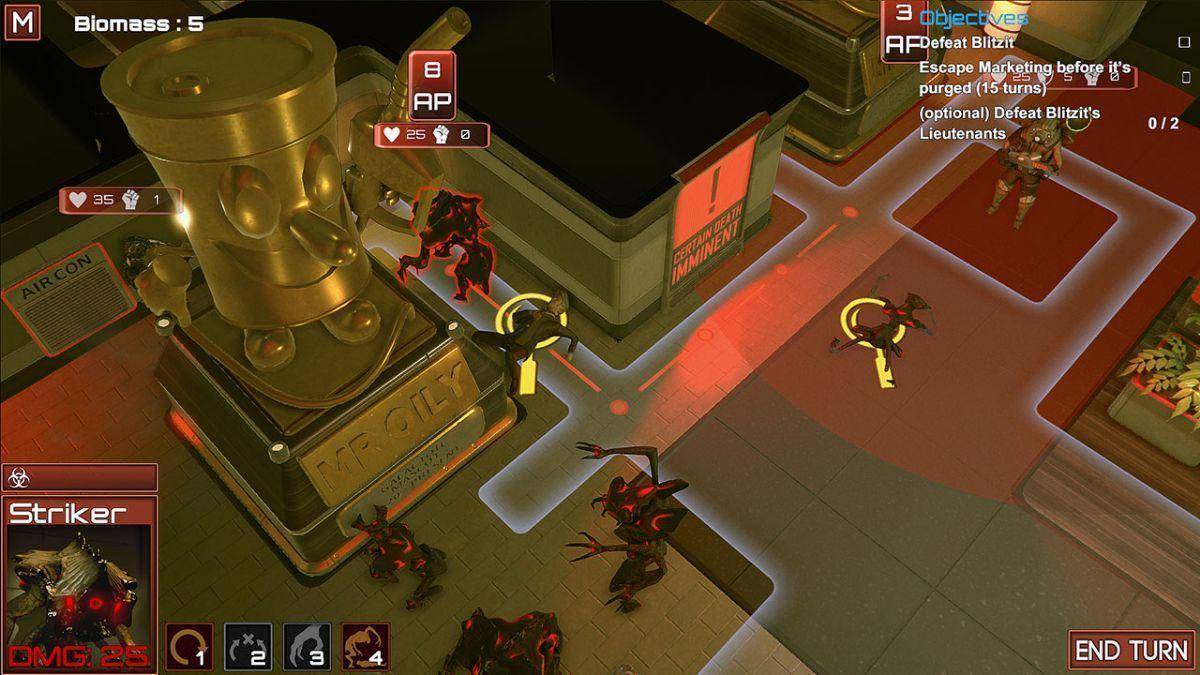 As for the humans, while I appreciate the incompetence and hilarity they bring at times, there was a lot of inconsistency with how they were shown off. Some are competent soldiers, yet others are complete idiots who I can’t believe were hired by any corporation. After all, if you’re trying to make profit, and your workers cost you money for failing, why were they hired in the first place? Hearing the “manager” over the loudspeaker was a nice source of entertainment, especially as things start to go south.

Finally, there was some serious issues with the way the interface was handled. You use the mouse button to select units and have them do certain actions either with a left-click or a right-click on the mouse. However, using these were at times finnicky. Sometimes it’d work fine, then other times I’d have to click multiple times to get the result I wanted. Not recommended for a strategy game where every move counts. What’s more, it was easy to confuse what to use the left mouse button for and what to use the right button for.

I know I sound like I’m bashing the game, and I’m sure there are some of you who will like Attack Of The Earthlings just fine. It just wasn’t for me, and I’m a guy who likes this kind of turn-based strategy title. The intent is there, and the setup is great, it’s just that the execution doesn’t work, and it kind of shows.

Should you want to try it out for yourself though, Attack Of The Earthlings is available on Steam.