420 Massacre sounds like Cheech and Chong’s stab at a horror movie, right? A couple of stoners lost in the wood that get sliced up between spliffs would be the likely premise. But if you’re assuming that 420 Massacre is nothing more than a horror-comedy shrouded in bong smoke, you are sorely mistaken. This April release from Writer-Director Dylan Reynolds walks a line as thin as rolling papers in terms of tone, but delivers a surprisingly satisfying story along the way. 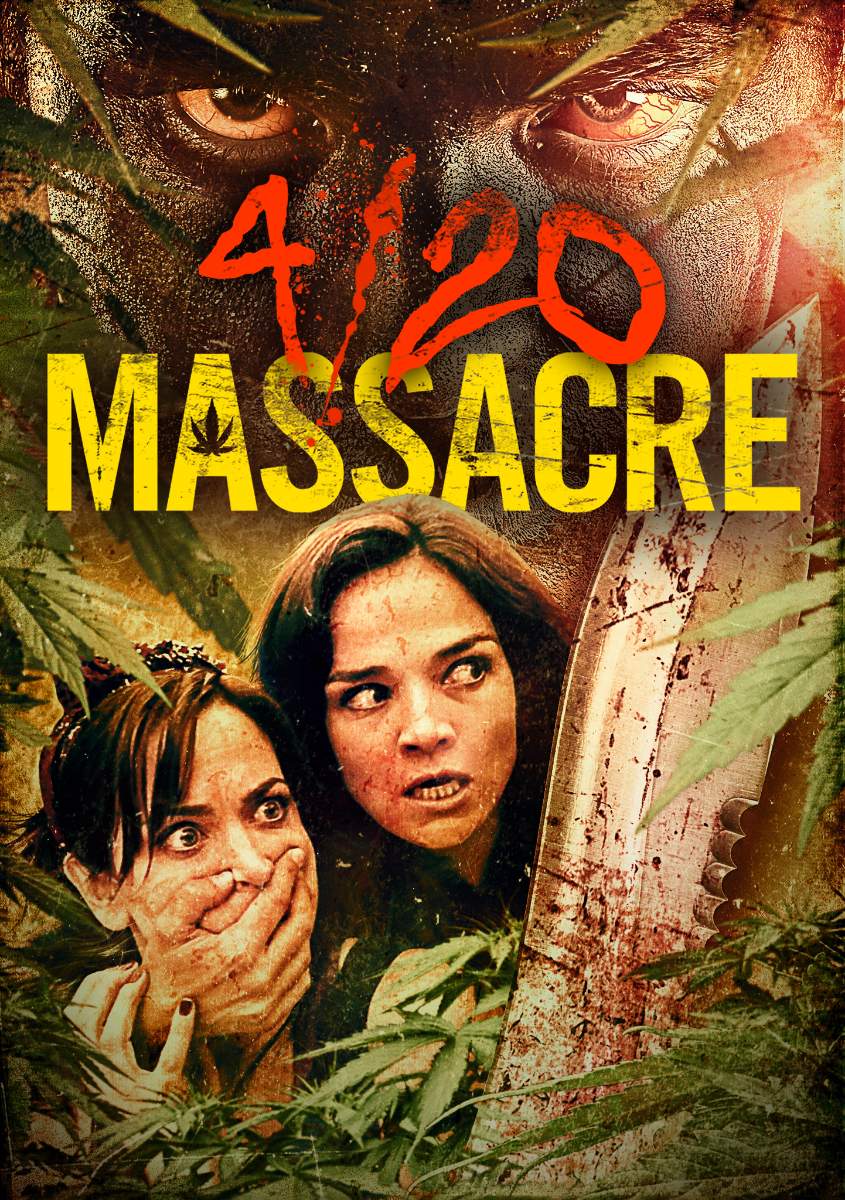 Being as I’ve always “passed on grass” when the opportunity arose, I wasn’t quite sure how this film was going to land for me in terms of themes. I was having flashbacks to that scene in the Seth Green/Matthew Lillard comedy Without A Paddle where the crew end up being chased through a pot field by Larry Kubiac from Parker Lewis Can’t Lose and Frankie from Boy Meets World. And for the first 5 minutes of 420 Massacre we’re not far off from that scenario. 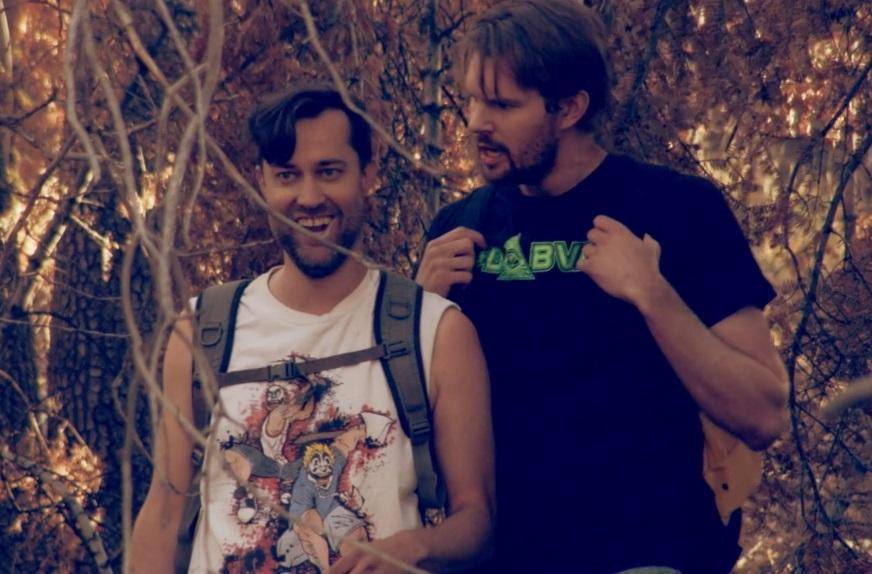 The film opens with two bickering, goofy hikers on the trail of an illegal Marijuana crop being grown in a national park. When these “opportunists” finally stumble upon the “Pot of Gold” and load up their backpack with the stash, they are savagely ambushed by what looks like the love child of Sigmund The Sea Monster and John Rambo. One hiker is slashed to bits, while the survivor, Buddy, runs off with their sticky-icky treasure and the game is afoot. Then for the next 30 minutes, no blood is spilt in the mountains of California. That’s not to say nothing is happening on screen. 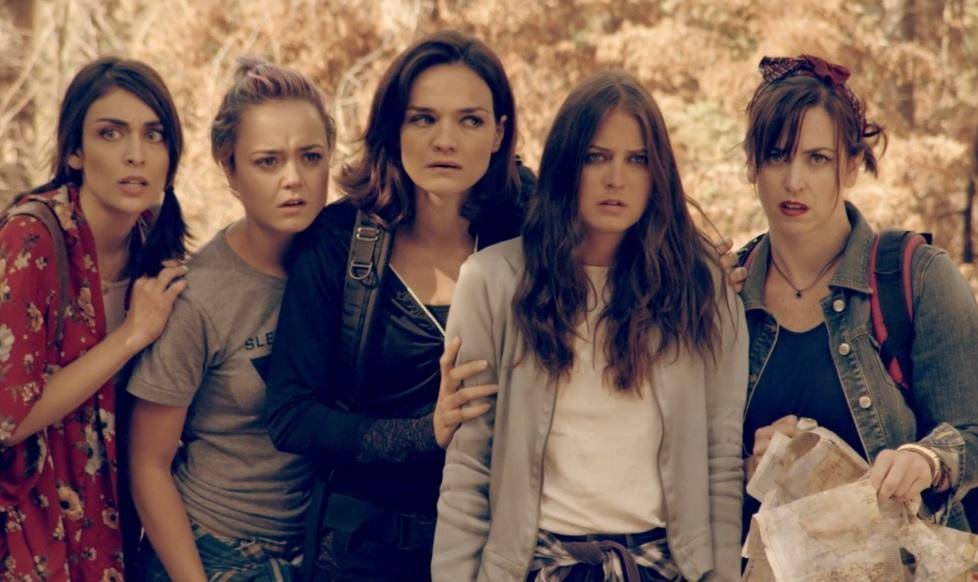 We meet our crew of campers as they prepare to hike 4 miles into the woods to find a favorite childhood camping spot where they can celebrate the birthday of Jess, played by Jamie Bernadette. I recently reviewed Bernadette as the star of the supernatural super hero revenge tale, Killing Joan. But knowing of her “Scream Queen” reputation, I was curious to see how she fared in a more familiar genre. More to come on that. 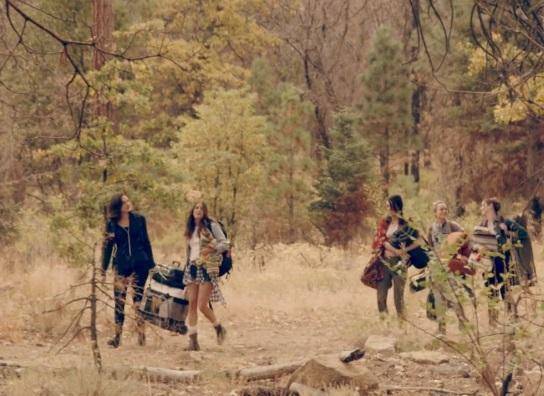 The writer, Dylan Reynolds, does a fine job of establishing these 5 “women in the woods” as very distinct characters with unique motivations. Some are even likable, imagine that. So often in horror films the idea seems to be that audiences want vapid, curvy babes to get terrorized by a maniac, forgetting to give us an emotional in to the story. 420 Massacre does not make that mistake. Reynolds delivers a solid premise with dialogue that’s as clever as it is natural and fine performances all around by the cast. 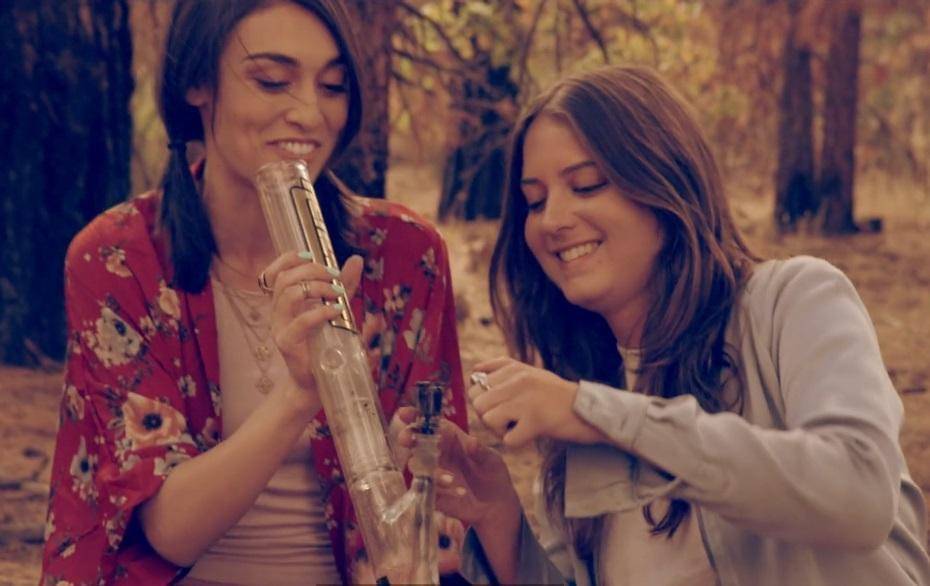 Though the kills can be counted on one hand and the film features no nudity, there are plenty of partying scenes filled with bongs, booze and nose candy. Despite the rampant drug use, the campers don’t seemed to be impaired or even affected by ingesting the various substances, which is surprising. But maybe that oversight is for the best, as lucid characterizations are what carry us through as we get to know each character more intimately. 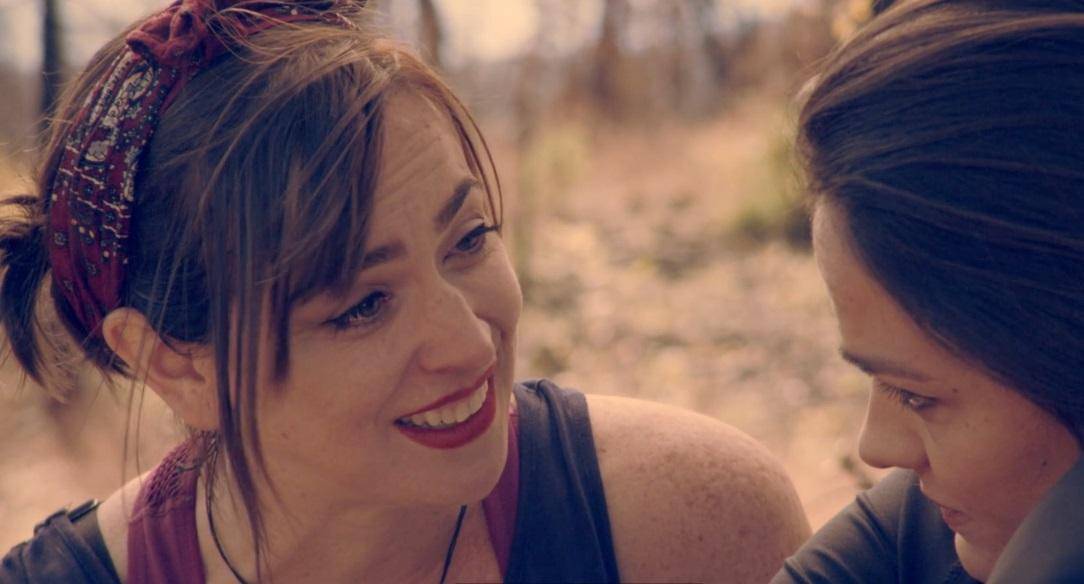 Jess (Bernadette) and Aubrey, played by Vanessa Rose Parker have been friends since childhood, a history that is alluded to as the story plays out. Aubrey has been harboring romantic feelings for Jamie over the years and with the encouragement of another camper, tries to make her move in a scene that is played sincerely by both actors. Such a poignant, honest conversation was not what I was expecting from a film that may very well end up on the cover of High Times this month.

But it’s not all Lifetime movie moments between kills, the comic relief looms large in the form of Donna, brought to life in a big way by the hilarious Stacey Danger. While all of our main cast are charismatic, Danger is the breakout as the lovable pot-head who supplies not only the “party favors”, but enthusiastically delivered stoner logic lecture on the sociological significance of the 4/20 holiday. 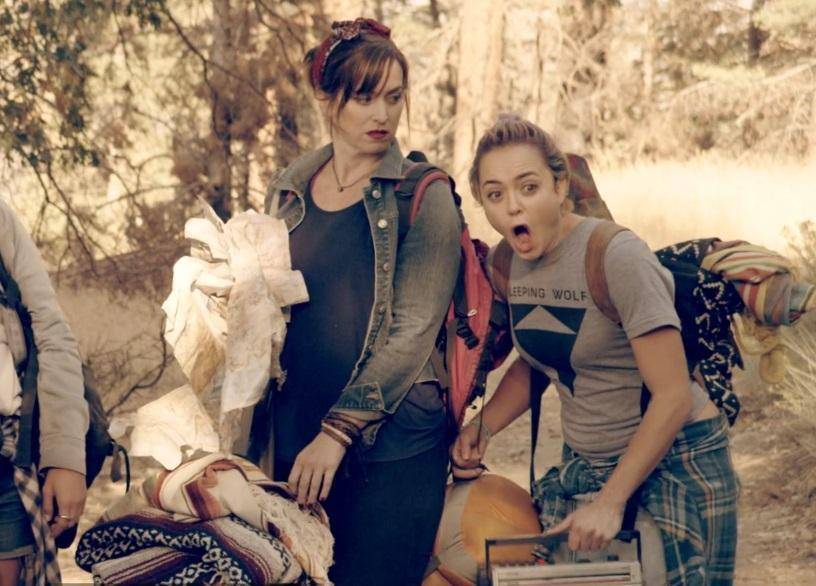 It’s Donna who is the most ecstatic when one of the thieving hikers from the opening, Buddy pops up again in a panic to hand off his backpack bounty to the girls. Hoping to have shaken off the killer, the doofus instead meets his demise and literally spills his guts at the hand of “The Shape”, the Halloween inspired name given to the forest dwelling murderer in the film’s credits.

Also traversing the tree laden trails is the grizzled, Ranger Rick portrayed by Jim Storm, who warns the girls to stay out of the hills where the homicidal pot farmers roam, while bumming a beer from their cooler. It’s hard to tell from his introduction if the Ranger is just quirky from too much time alone in the woods or hiding a more sinister side, which is played teased well by the scripting. 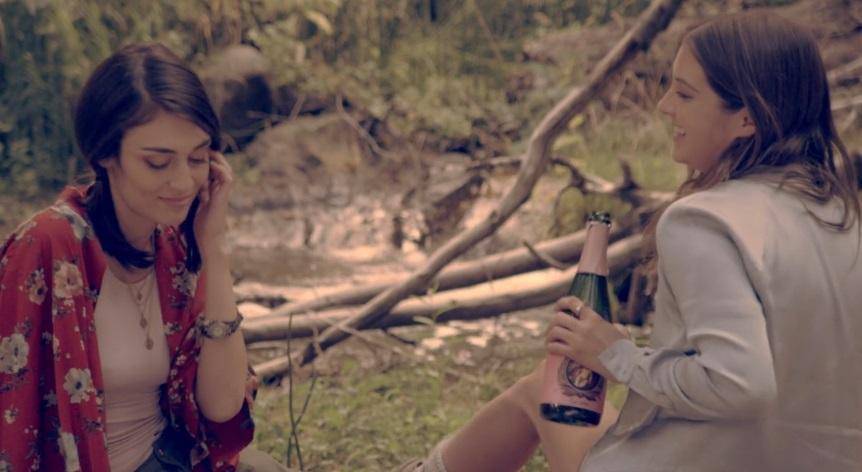 Meanwhile more Lesbian romance is brewing between the brash and opinionated, Rachel played by Justine Wachsburger who flirtatiously invited her co-worker, Michelle (Marissa Pistone), along for the weekend, hoping for a hook-up. It’s their brief make-out scene which leads to the first casualty of one of our main players and it’s then that the action really kicks in. 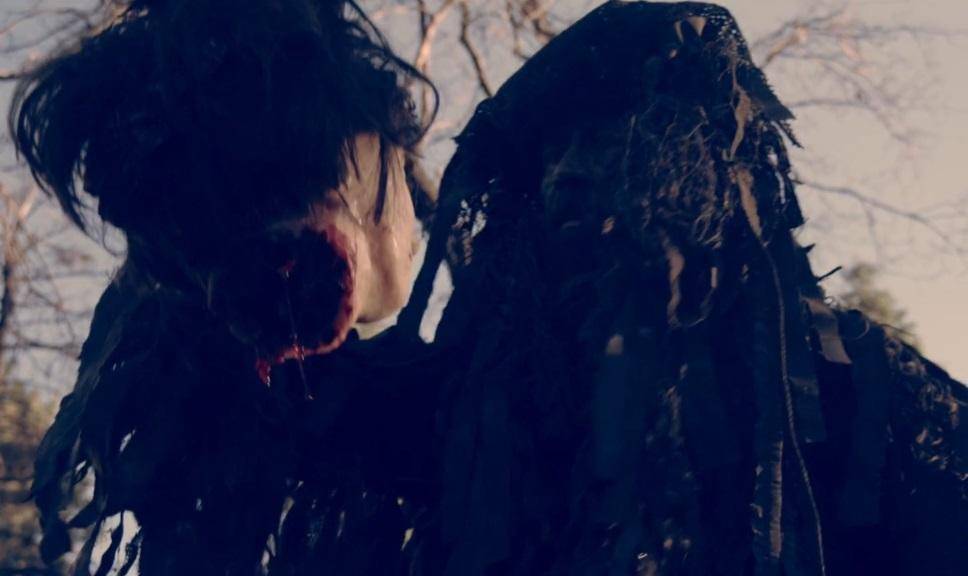 I should remark here that “The Shape” really does relish the art of the kill, playing games with his prey in their final moments. While these mutilations are not the ironic kills of a Jason Voorhees, the killer will take time to get a hit off a lit joint from the victim’s mouth or use a bong as a very entertaining weapon. Since the kills take place in daylight there is less to work with in terms of foreboding shadows, but the ferocity of “The Shape” still justifies the fear of the victims. 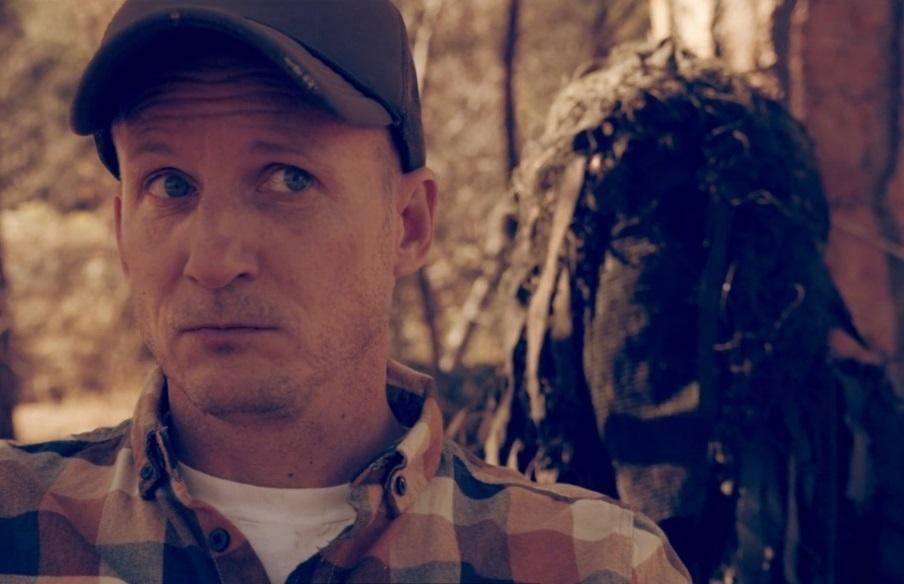 Adding to the intensity of the attacks is the score by Angela Winter Defoe who brings a layer of drama to the proceedings in what is a mostly organic musical contribution. Although there are a few orchestral stings that feel a bit over the top, causing some question as to how seriously the audience is supposed to be taking the whole experience. The tone is also brought into question with a few almost Scooby-Doo-esque expressions of fear and panic by the cast, but overall the terror is played straight.

By the film’s end Bernadette as Jess is our traditional final girl, facing off against the true mastermind who has been pulling the strings of “The Shape”. Not only has Jess refused to take part in the pot party up to this point, her skills as a self-defense instructor have also been displayed, so we know she is capable of getting revenge for her fallen friends. 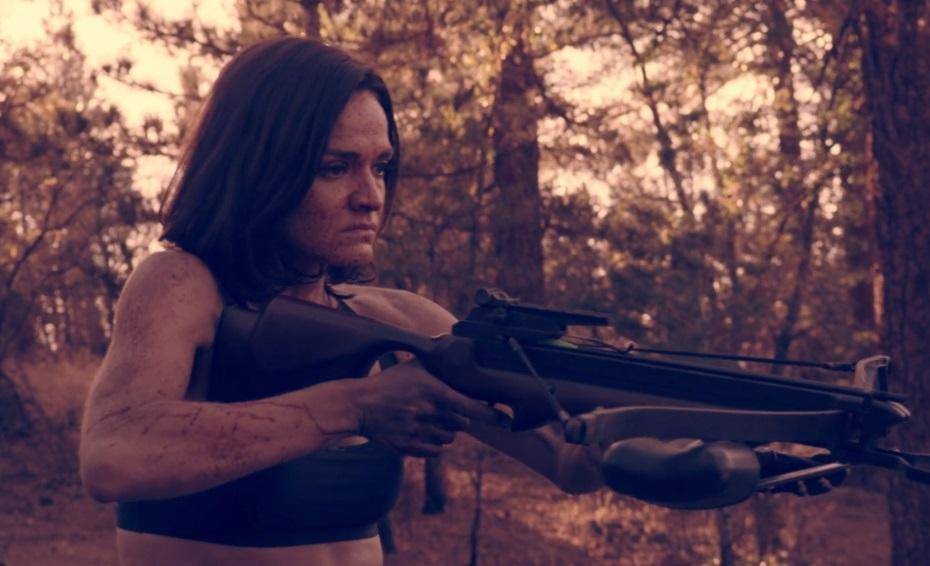 Bernadette goes into action star mode here in a much more convincing manner than in Killing Joan, enhanced especially by witnessing the brutal death of Aubrey in a moment that was emotionally charged in a way I was not expecting. 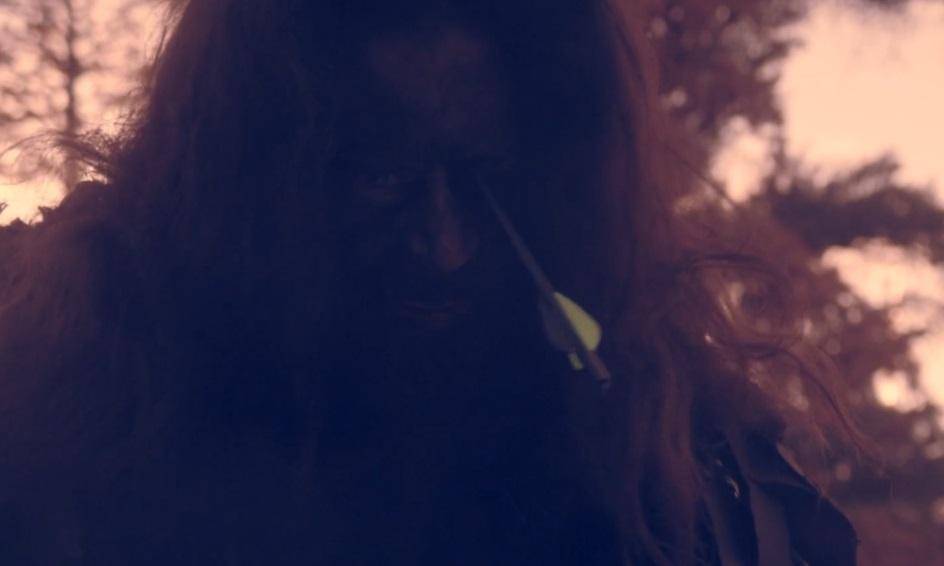 The reveal of the mastermind’s twisted motivations and tragic origin of “The Shape” is also a great bit of writing in that it makes you hate the bad guys even more, while instilling a small bit of empathy for what drove them to their dastardly scheme. These are always the best kind of villains. Yet when Bernadette strikes the final blows, the audience feels that justice has not only been served, but earned.

All in all, 420 Massacre massively surpassed my expectations based on title alone. Though it drags a bit in the middle in terms of action as we get the know the characters, the strong dialogue and balanced exploration into their desires ultimately makes this a stronger cinematic experience. 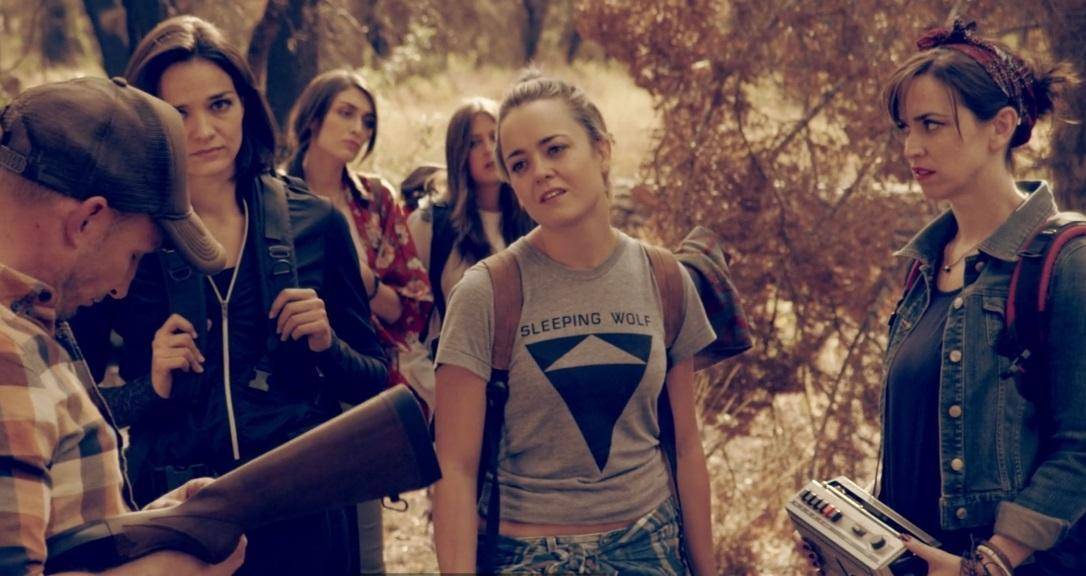 Reynolds also manages to add a bit of female empowerment to the story, never veering into exploitation tropes that would seem fair game in a film with overt drug use and lesbian themes which are generally used to titillate instead of shape a story. 420 Massacre may be the perfect film to add a little excitement to your 4/20 holiday, though inviting Mary Jane to be part of your personal screening is purely optional given the quality of the film. 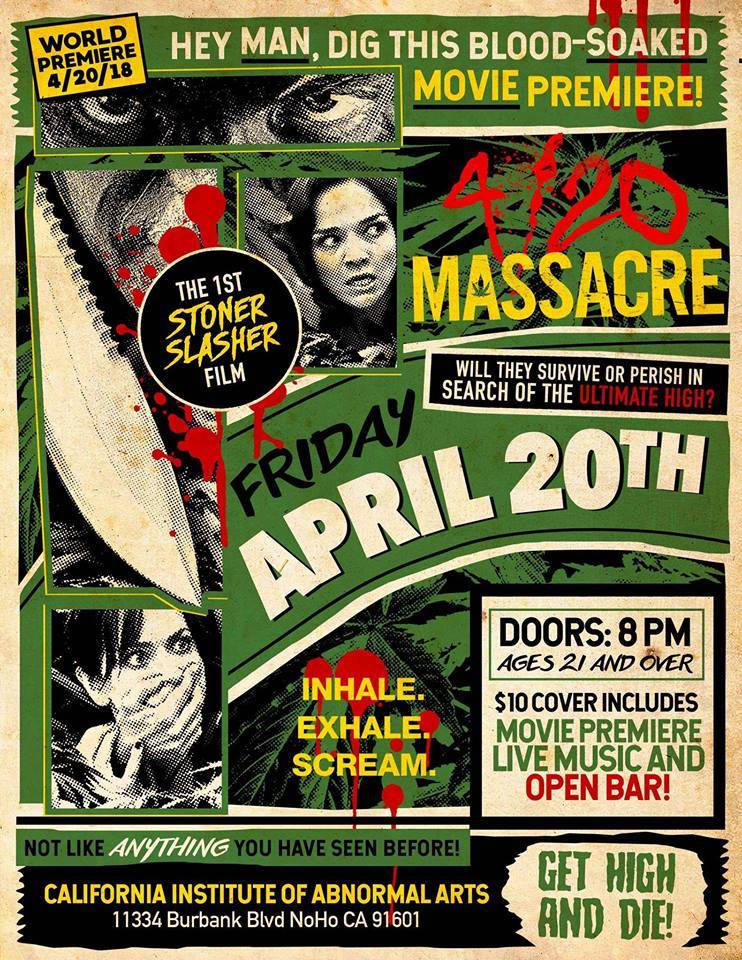 For Los Angeles residents the film premieres on 4/20 during a screening at the California Institute of Abnormalarts, 11334 Burbank Blvd, North Hollywood, California 91601. The film will be also be available on VOD and DVD formats for all to see.

Black Adam Script Has Come In, Film Could Begin Production In 2019 Lego-Ized Runaways Have Been Added To Marvel Super Heroes 2

Actress Jamie Bernadette has starred in many films, but she’s never gotten

The bonds of high school friendships run deep, but the baseball bro