While some might consider 2047 Virtual Revolution to be nothing more than a stylish homage to Blade Runner, it is Guy-Roger Duvert’s laser focused vision that manages to guide the film into a genuine futuristic adventure with its own voice.

Let get right to it, I really enjoyed 2047 Virtual Revolution. I’ll also admit that Blade Runner 2049 was one of my favorite films of 2017, despite its lackluster box office performance and theatrical run time. 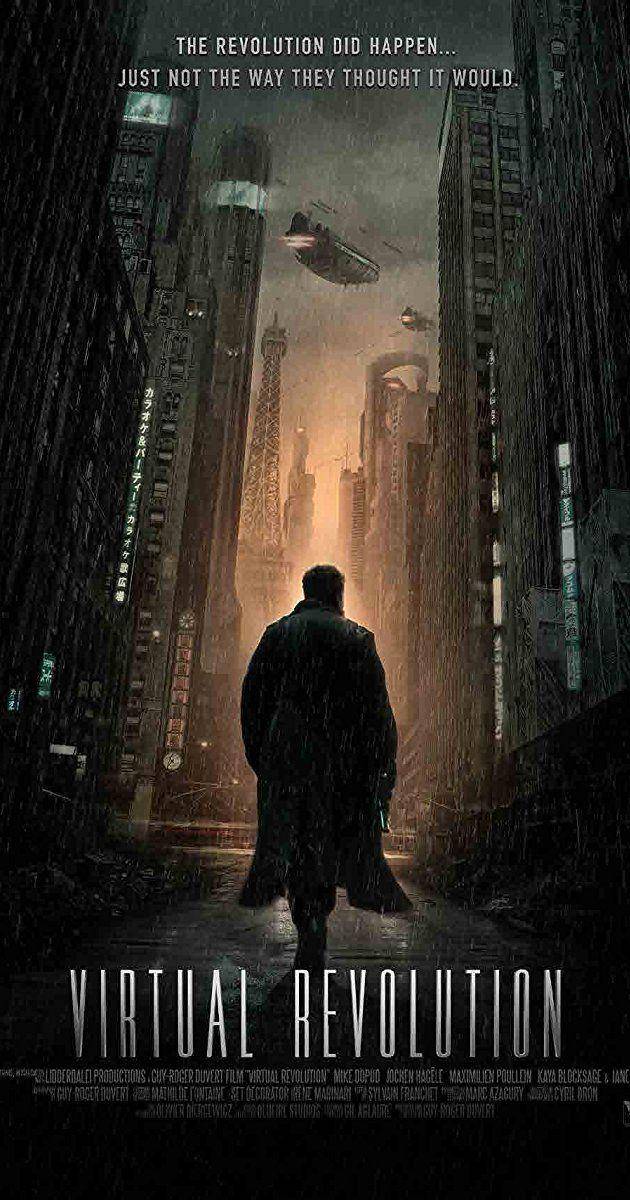 While some might consider 2047 Virtual Revolution to be nothing more than a stylish homage to Ridley Scott’s original Blade Runner, it is Writer/Composer/Director Guy-Roger Duvert’s laser focused vision that manages to guide the film into a genuine futuristic adventure with its own voice. This award winning feature is coming to DVD in the US on January 16 and here’s why you should give this movie a shot. 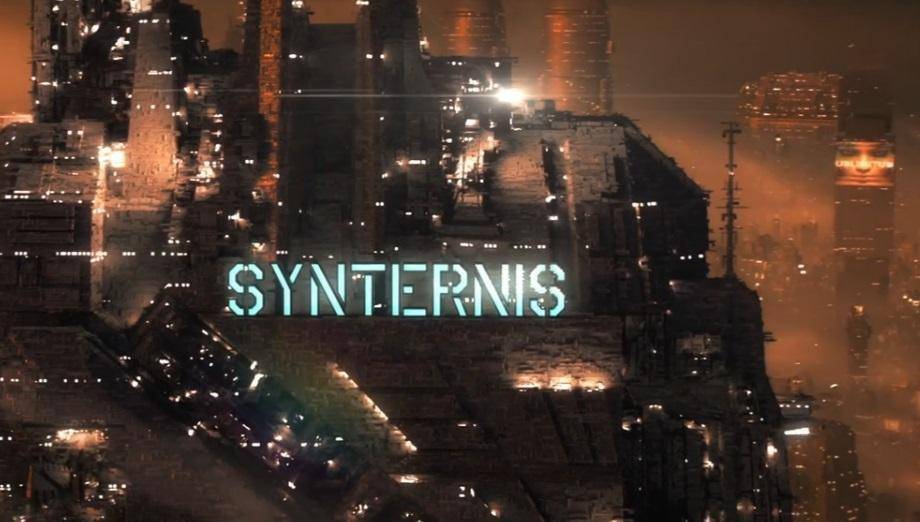 As the old saying goes: if you’re going to steal, steal from the best. Well the production design for 2047 Virtual Revolution is taken whole hog from Blade Runner, but in an almost uncanny way. 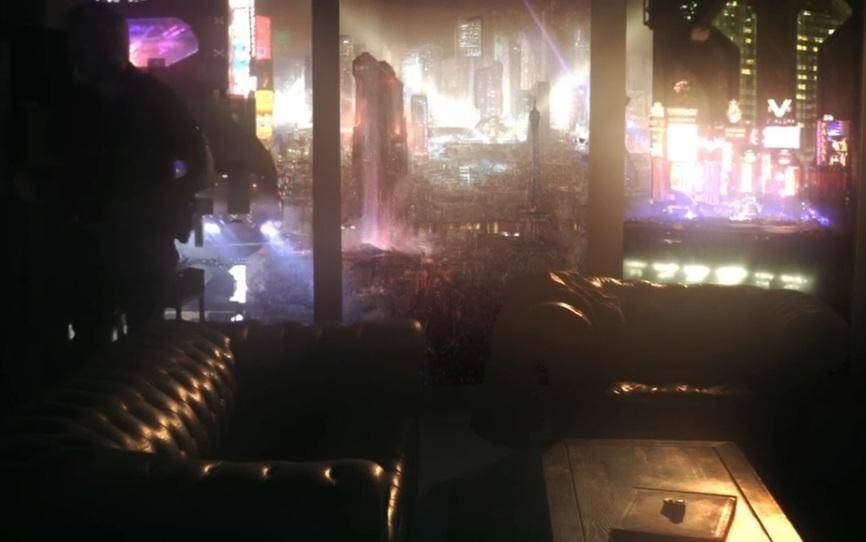 It’s all there from the dark sprawling cityscapes filled with flying cars, low-level noir lighting and run-down futuristic technology adorning the streets. You’d swear this was made up of unused footage from Blade Runner 2049, were it not for the absence of one key element, Replicants.

Despite the similarities to cinematic interpretation of Philip K. Dick’s Do Robots Dream of Electric Sheep?, this is not a film where mechanical slaves seek to become human, in fact there is not an artificial creature (at least not a physical one) to be found in the movie. So what is the story of 2047 Virtual Revolution? Per the film’s PR materials:

Most of the world’s population live inside corporate-controlled virtual worlds and drift further out of touch with reality. Nash, a private investigator/ mercenary is hired to track down a group of hackers who are disrupting and terrorizing the virtual space in a bid to free human beings from their online prisons.

So while the aesthetic is pure Blade Runner, the story is more a situation of people choosing to be in The Matrix by choice or a darker take on Steven Spielberg’s upcoming Ready Player One adaptation. However the questions the film posits with this set-up are far from played out. The final moments of the film will throw you for a loop as you come to understand the filmmakers revolutionary (pun intended) views on the morality of virtual reality. 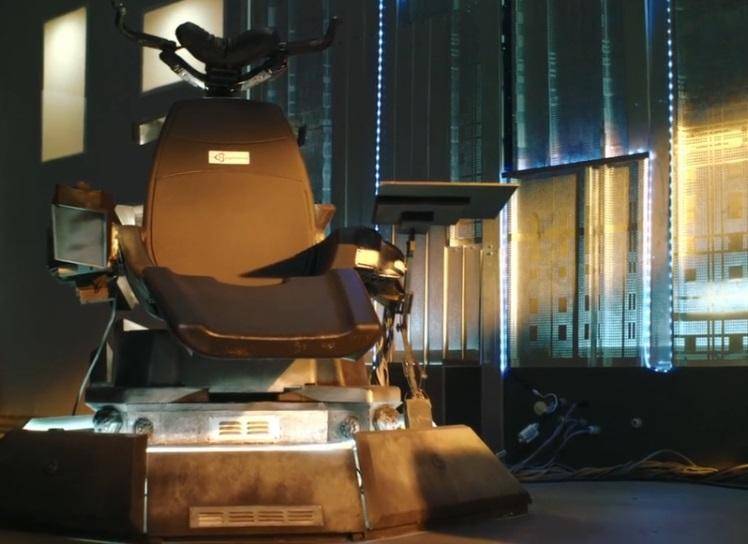 In the place of synthetic humans we have the “The Connected”, people choosing to live completely in a virtual state, while those who keep one foot in reality are called “Hybrids”. With this core conceit, the film finds itself jumping in and out of different online adventure scenarios that these plugged-in players have selected for themselves, including our protagonist. 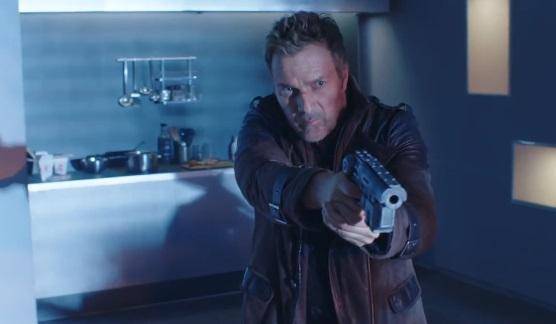 Lead actor, Mike Dopud, who plays the bounty hunter, Nash knows his way around sci-fi television, having had small recurring roles on Smallville, SyFy’s Battlestar Galactica and more recently the CW’s Arrow. He even holds the distinction of having appeared in not 1, not 2, but 3 X-Men films in small roles. So how does Dopud handle taking the heroic spotlight for 90 minutes? 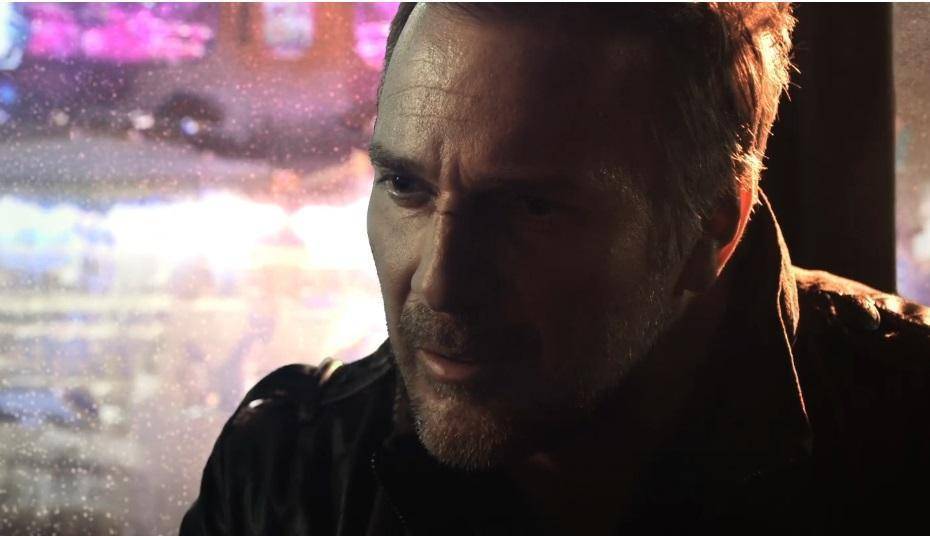 I don’t quite buy into our hero’s performance throughout the film or his supposed grief over a lost lover killed by a virus while in the virtual world. Dopud is visibly acting in most scenes, rarely coming off natural, but hiding in the shadows helps that. If I’m being honest though, I wasn’t a fan of Harrison Ford’s performance in Blade Runner either, so Dopud’s in good company. Luckily, there are plenty of colorful supporting players to keep the film interesting, most of whom are European. 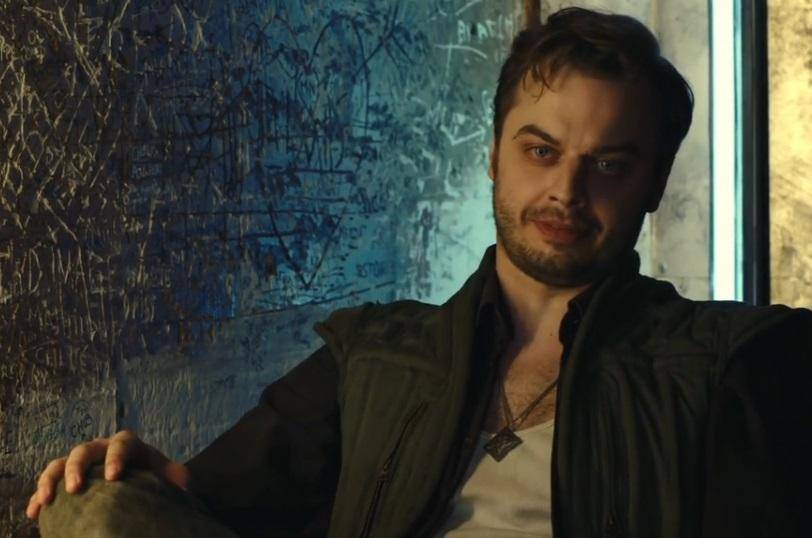 Every action hero needs a quirky, tech-saavy sidekick to offset their grim demeanor. The T-800 had spunky teen John Connor, Judge Dredd had Rob Schneider (OK, bad example) and Nash has Morel. Maximilien Poullein (who looks like Nick Kroll’s long lost French brother) plays a computer hacker living in the slums who is constantly cutting the tension with loud facial expressions, while providing a little exposition along the way. Every time he’s on screen he’s a welcome face, as is the film’s resident “heavy”. 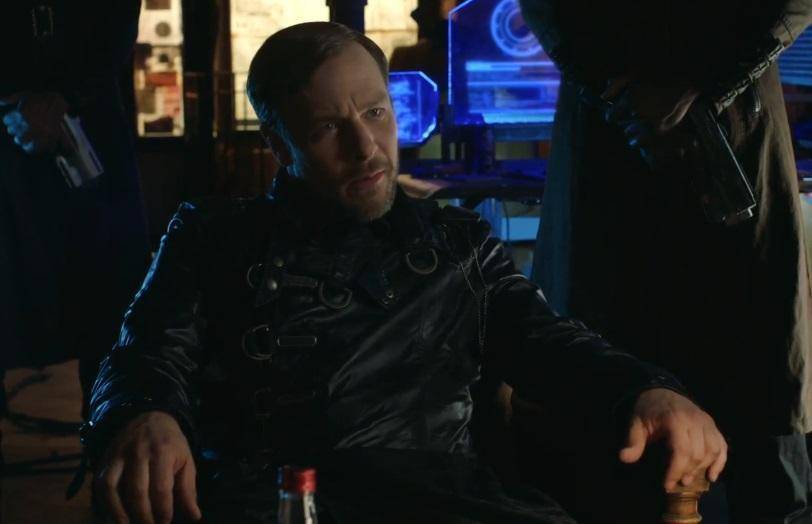 As Interpol Agent Stilson, Jochen Hägele is on the hunt for those involved in a recent group of murders involving “The Connected” and it just so happens that Nash is deep in the middle of it. Though he is not technically a villain, Hägele plays the part with such quiet menace that you can’t help but feel intimidated. I absolutely loved the intensity of his performance and think he himself could have made a great lead, had the director not been going for the American detective archetype. His scenes are definitely the highlight of the film. 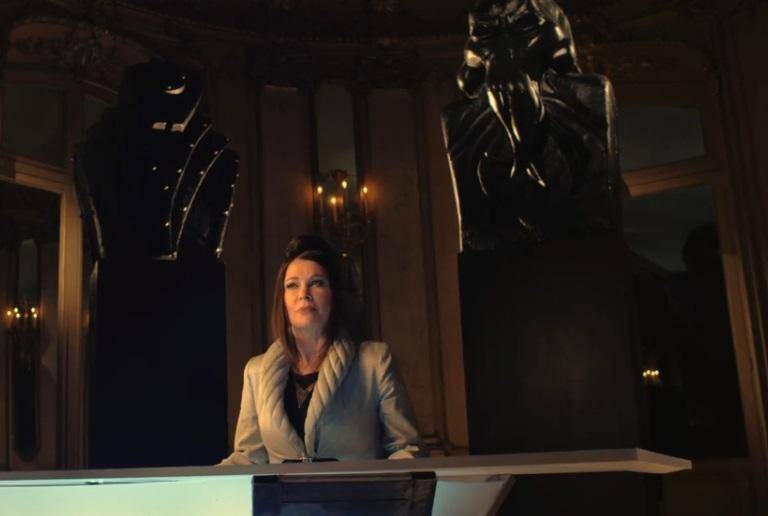 Also playing a pivotal role in the plot is Kaya Blocksage as Camylle, the leader of the revolution working to turn Nash to her side and against his stoic employer at the Synternis Corporation, who longtime sci-fi fans will recognize as Jane Badler, best known as the evil alien leader, “Diana” from the 80’s mini-series V. Both are persuasive in their own ways, though Nash’s ultimate allegiance is a matter of the heart. 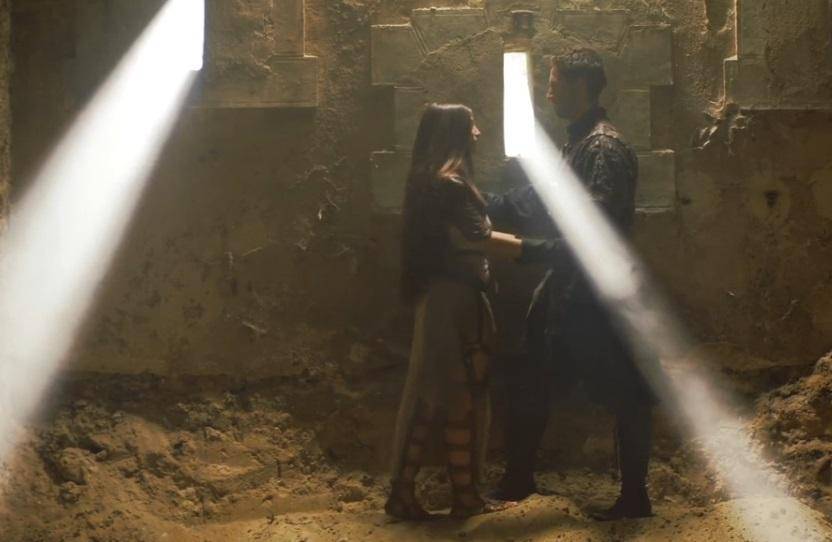 There’s also a fair amount of “avatar work” in the film as characters take on virtual personas, which could have easily been the film’s major failing. Yet those performances are surprisingly solid. For example, Nash dives into a medieval fantasy role when he “Logs In” and during the short time he interacts with his team of adventurers, you can sense their history together. The fight choreography for his party melees is quite well done as well. There’s one fire stunt in particular that both surprised and impressed me. 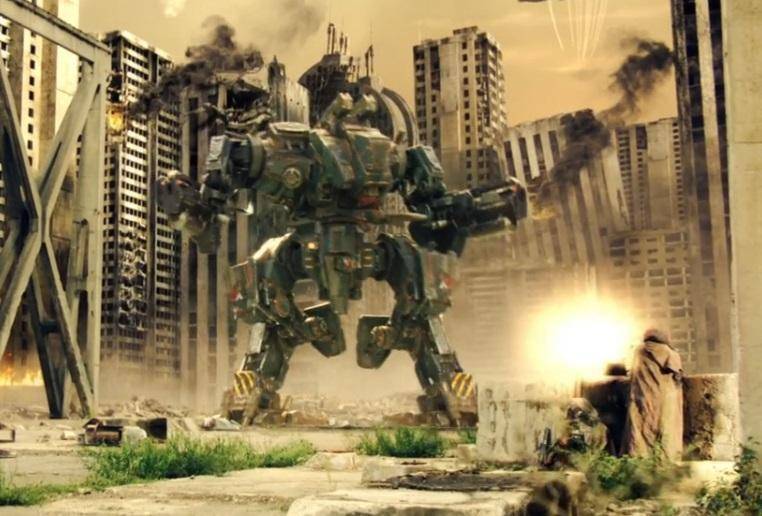 In fact, all the physical action in the film is genuinely exciting. Duvert knows how to create an atmosphere with lighting and then stage the battles for maximum effect, whether hand to hand or full on CGI mech-robot attacks, each action set-piece has its own style and energy. Again, this film could have felt so disjointed, but somehow it all remains fluidly in the same narrative. 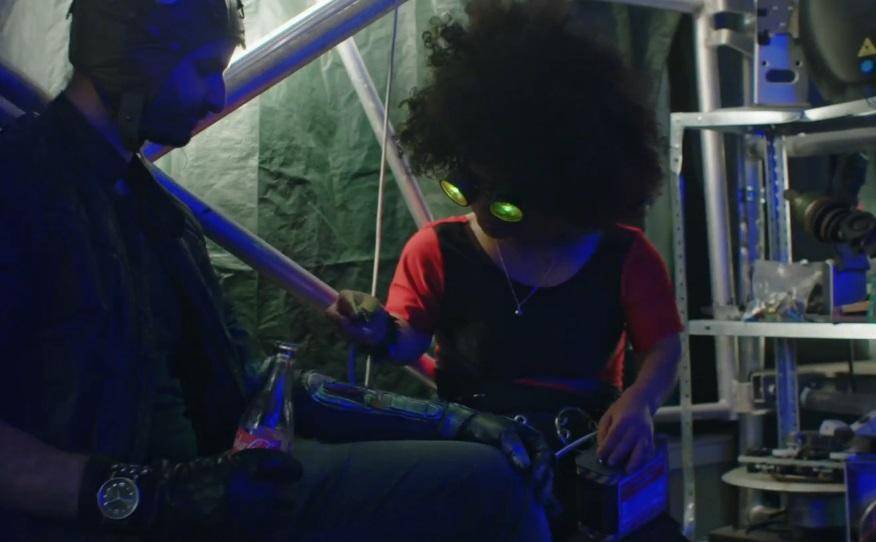 For a non-studio film, the CGI work really deserves to be recognized for its contribution to the film as does the impressive costuming. Its the details that make this film successful, down to the set dressing and kudos to Duvert for creating a world with actual costumed extras who give the entire experience a larger scope simply by their presence.

For what it is, 2047 Virtual Revolution is better than anything you’ve seen on the SyFy channel in the last decade and in truth, is more competently structured storywise than the debacle that was Justice League. Beyond that, the film’s got something to say in its closing moments that will leave you thinking well after credits roll. Something it shares with the classic film that inspired it. 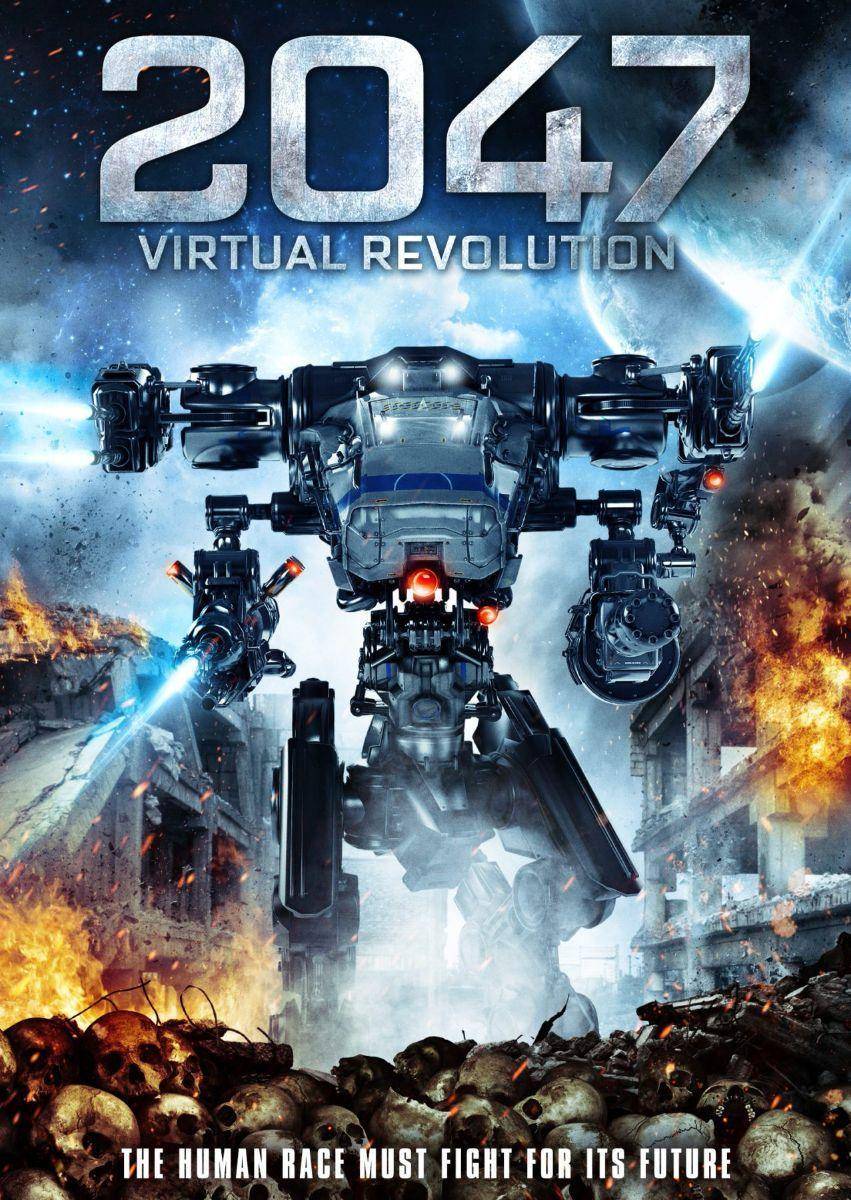 If backed by Warner Bros, this truly could have been a “A Blade Runner Story” in the style of Star Wars spin-offs like Rogue One, giving us a glimpse at the European counterpart to the Tyrell Corporation in a different corner of that universe and how the influence of Synternis has changed the state of the world.

You can find 2047 Virtual Revolution on DVD starting January 16 from Wide Eye Releasing.

Wonder Woman 2 To Be “Totally Different” Surge of Power: Revenge of the Sequel – Movie Review

Heels: From Arrow to Wrestling

My first exposure to the work of my newest interview subject, Lois

Before CW has the Arrowverse, there is Universe 167, the setting of