Watching Skies Is An Ode To 80s Kid Culture

Mark O’Connell’s upcoming book Watching Skies is devoted to memories of his childhood, through examination of the popular movies that came out around that time: Star Wars, ET, Raiders of the Lost Ark, Gremlins and others.

In this energetic and insightful memoir-through-cinema, Mark O’Connell flies a gilded X-Wing through a universe of bedroom remakes of Return of the Jedi, close encounters with Christopher Reeve, sticker album swaps, a honeymoon on Amity Island and the trauma of losing an entire Star Wars figure collection.

A unique study on how a rich galaxy of movies continue shaping big and vital cinema to this day, Watching Skies is for all Star Wars kids – whatever their era.

At this point, there’s no shortage of material out there waxing poetic about growing up in the 1980s. Much of that is the Nostalgia Drug convincing thirty- and forty-somethings that a bunch of cheap plastic figures were the end-all of human existence, but when you think about it, anyone who got to experience that culture WOULD be obsessed.

Deregulation spawned a Reagan-era gold rush of products and materials targeted exclusively at children. TV afternoons weren’t devoted to lousy reality shows, but fantasy adventures about barbarians fighting skeletons and giant robots. As the toy market grew, it became more inventive — imagine playing tag with lasers. Kids were treated like kings in the 1980s — and their parents like peasants that the tax collectors beat upside-down until the coins shook out. But if you were a kid, you had it made. 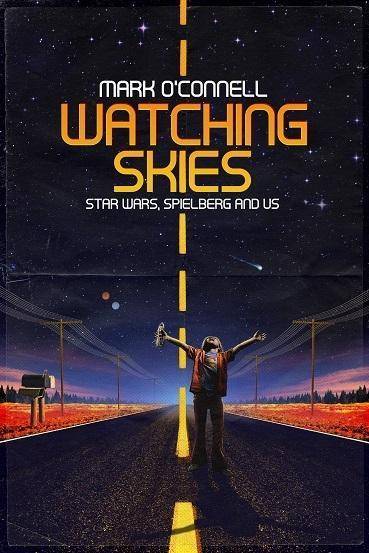 So even if you’re too young to remember the kid-focused culture of the 1980s, you have to admit it was pretty cool. Multiple geek-friendly celebrities have offered their endorsement for Watching Skies, including Mark Millar, who remarks “I thought I was the only one obsessed with every single thing written in this book.” Mark Millar thought he was the only one obsessed with Star Wars? Explains a thing or two about him.

Watching Skies comes out later this month from History Press.