Westerns were a staple of American cinema for decades, transporting movie-goers back to the frontier where danger lurked around every corner and justice could be had with a ready six-shooter. Somehow over the years cowboy adventure gave way to secrets agents, fast cars and super powers, but perhaps cinema fans today need a history lesson. Strapping on some spurs to fill the void is Tombstone Rashomon from director Alex Cox. 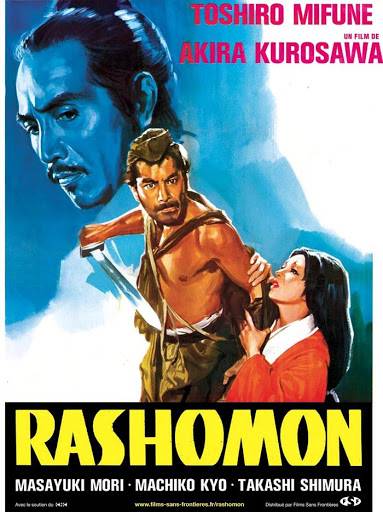 I’ll admit that having not attended film school, my only exposure to the work of Akira Kurosawa is his legendary film The Seven Samurai upon which seminal American western The Magnificent Seven was based. So the title of Tombstone Rashomon held very little meaning in terms of setting my expectations for the film.

Even in the realm of American cinema the glut of big budget Hollywood westerns of the 90’s like Clint Eastwood’s Unforgiven, Sam Raimi’s The Quick and The Dead, Lawrence Kasdan’s Wyatt Earp or the universally loved Tombstone had all passed me by without much of a thought. Though the Young Guns series is a nostalgic favorite. 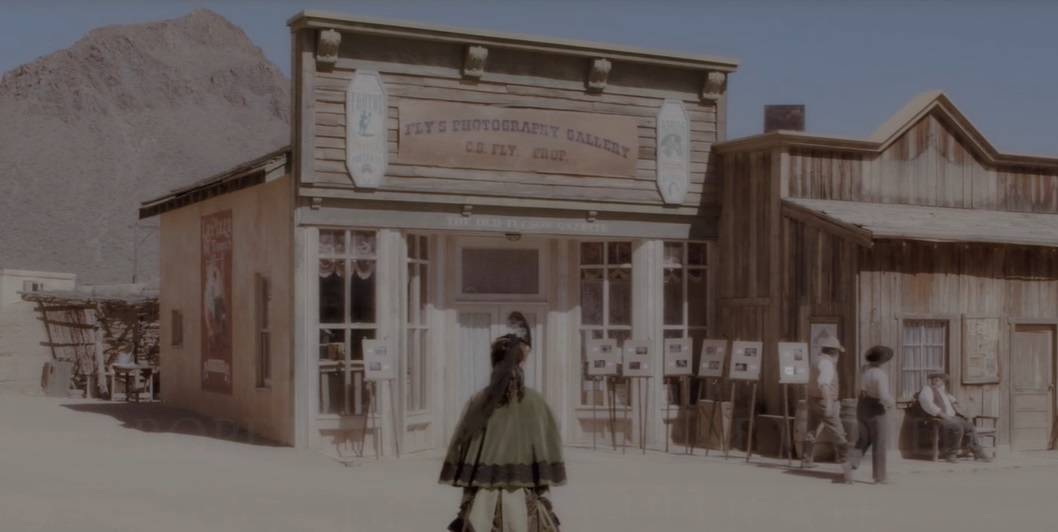 That being said, as a resident of Arizona for over a decade and having taken the trip to the frontier town where Tombstone Rashomon was filmed, I can admit to feeling a bit of a personal connection to this ambitious project which presents the old west in a way I have yet to see on film. 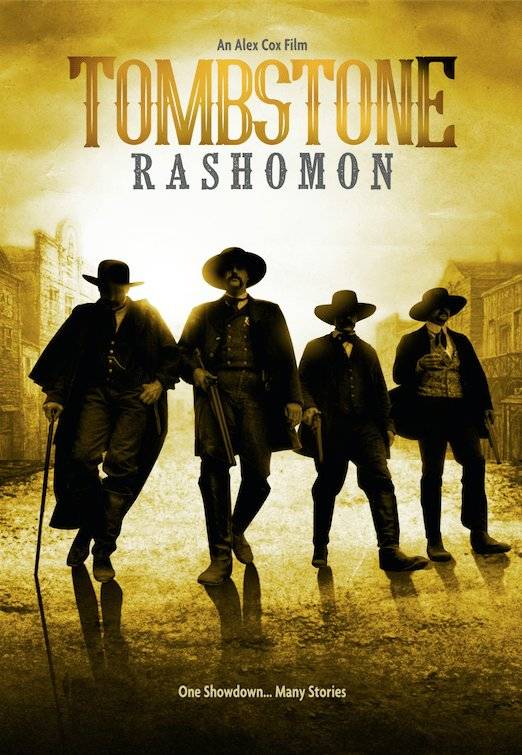 You see, Tombstone Rashomon is not your standard tale of frontier justice, nor is it a lower budget retelling of the same story seen over 20 years ago minus the charisma of Kurt Russell to carry it through. No, this film has much more in common with films like This Is Spinal Tap or Waiting For Guffman in that it takes the Western into the world of Mockumentary. Albeit with a more historical bent and less comedic intent.

With Tombstone Rashomon Director Alex Cox chooses to lead the viewer through the events leading up to the infamous “Gunfight at the OK Corral” using the documentary interview format with the residents and visitors to Tombstone, AZ on that fateful day in 1881. So does this documentary style of film making freshen up the story of the 30 second act of violence that has been adapted so many time before? Well, yes and no. 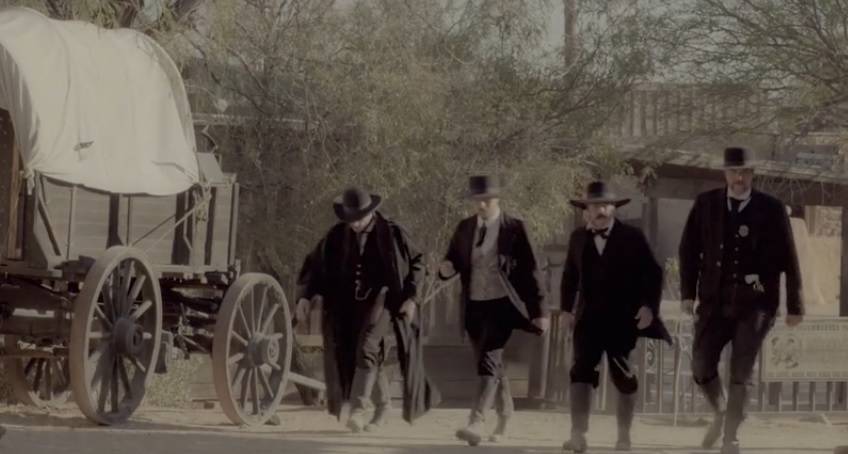 For historical buffs, any attempt to tell a tale of true events on film is often viewed with much scrutiny. Those who have obsessively studied the showdown between the Earps, Clantons and McLaurys can likely point out any contradictions or omissions presented in the events depicted in Tombstone Rashomon, but are such concessions necessary to tell a compelling story in a cinematic format to prevent it from reading like a Western History term paper? In this case, it seems like the filmmakers opted for somewhere in between.

The re-enactment footage filmed in the historic tourist destination of Tombstone is complete with period costuming, but the performances are far from sensationalized. In fact the meetings between the various parties who will eventually exchange gunfire is fairly subdued from a cinematography perspective. No swooping crane shots, no lens flares or camera flourishes, instead it feels like being at a murder mystery dinner where all the staff are in character and leading you to the next step in the story. 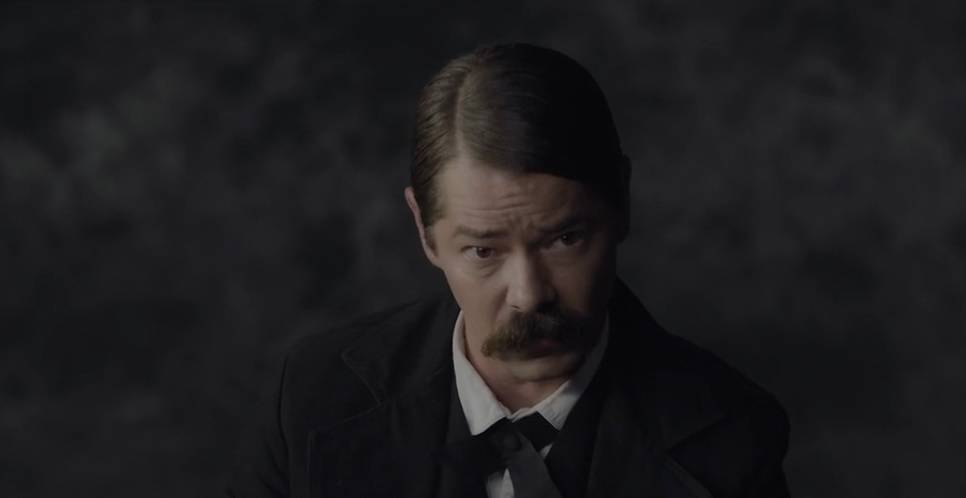 Mixing up the monotony of re-enactment scenes that have likely been shown dozens of times on The History Channel are the interview segments, where the actors portraying Tombstone residents really get provide historical insight from the perspective of their characters and the true entertainment value of the film is found. 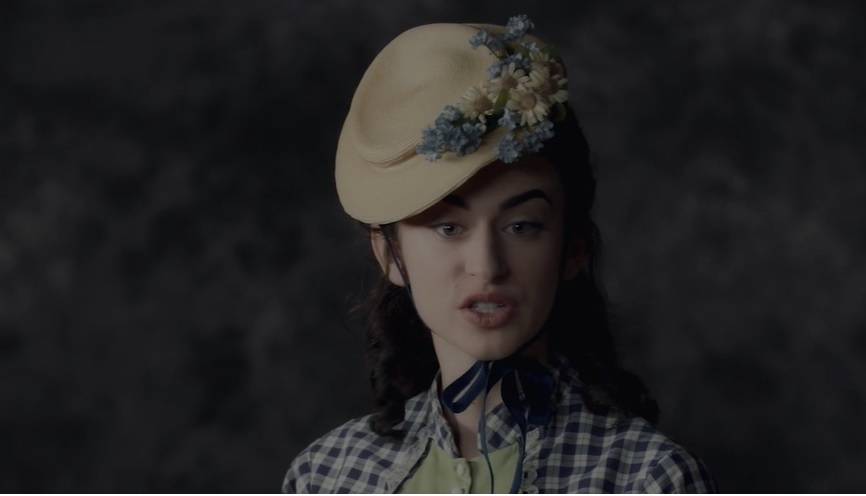 For example, Doc Holliday’s Eastern European common law wife and Hungarian prostitute, Kate as portrayed by Christine Doidge is a laugh riot. With her heavy accented vitriol for the goings on with her lover and a quirky habit of mixing up he/she in her descriptions of the individuals involved, Doidge provides a much needed bit of levity to the mostly somber affair of men coming to blows over stolen horses and macho chest thumping. 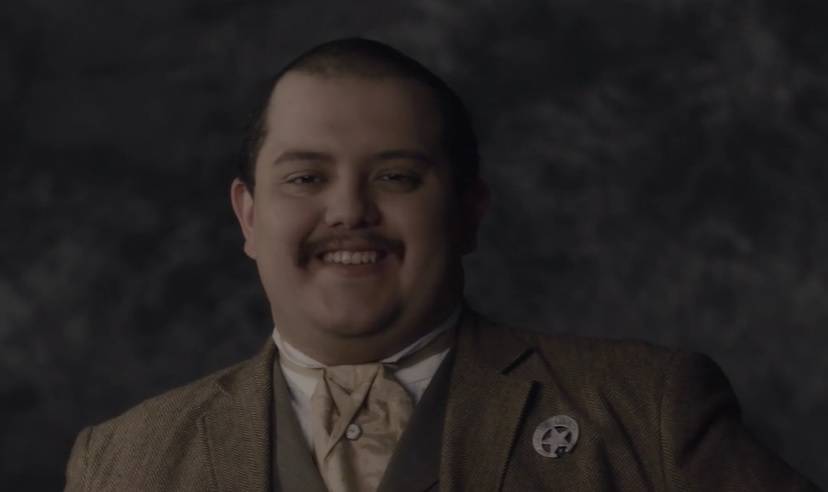 The same can be said for Jesse Lee Pacheco as Johnny Behan, the Sherriff of Yavapai County. Pacheco imbues Sherriff Behan with a smooth, politician style arrogance that shows how much he is enjoying being involved in a “moving picture”. Presenting himself as a keeper of the peace, Behan on camera comes across as an instigator who is opposed to the involvement of the Earps as U.S. Marshals in his town and his backstabbing attitudes are source of great fun. 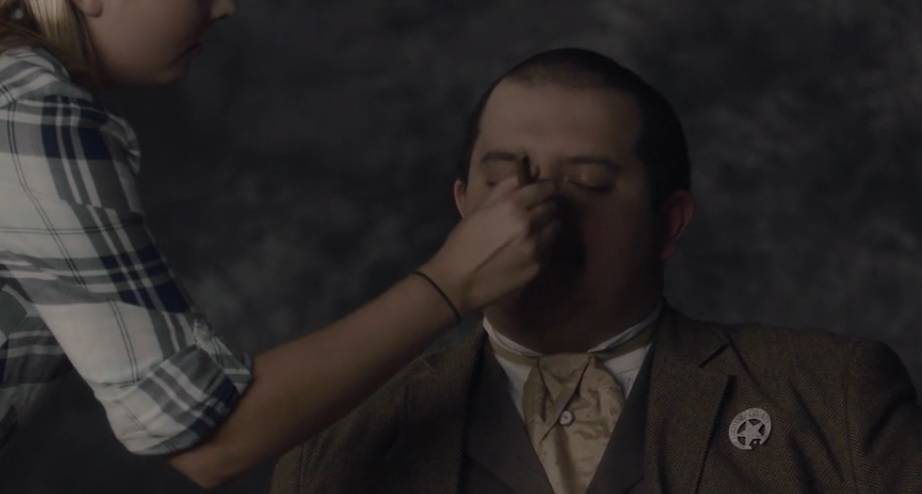 Of course these interviews are anachronistic, taking on a more modern tone, but that’s part of the fun. We see make-up people in 21st century outfits prepare the subjects for their time on camera and a monotone female voice off screen coaches the interviewees to repeat or clarify certain statements. This all serves to make the affair more engaging than it would otherwise be.

The final shootout is filmed in a verité style so as to give the viewer a feeling of being in the moment with those brandishing their firearms, but the journey to get to this moment feels less than extraordinary.

Though Tombstone Rashomon is certainly a novel concept, the overall production doesn’t feel as though it has much appeal outside of those who already spend their time reading up on Western frontier history. The film slows down at times for the readings of historical documents, which feels like someone filmed the voice-over artists in a Ken Burns documentary who decided to get into character by dressing up.

Tombstone Rashomon is the kind of film that might be an interesting way to break up the monotony of a high school history class, but definitely not the kind of movie you break out with a group of friends looking for a night of fun. Then again, if your idea of a good time is to travel back in time to see those old timey photographs brought to life on screen, Tombstone Rashomon will likely fit the bill.