“Hey, you got your homicidal devil worshippers in my found footage horror film!” “Hey, you got your shaky-cam scares in my Satanic Panic documentary.” If this creepy mash-up sounds like your kind of movie madness, then The Devil’s Well from writer/director Kurtis Spieler is waiting for you to explore it’s murky depths, if you dare. 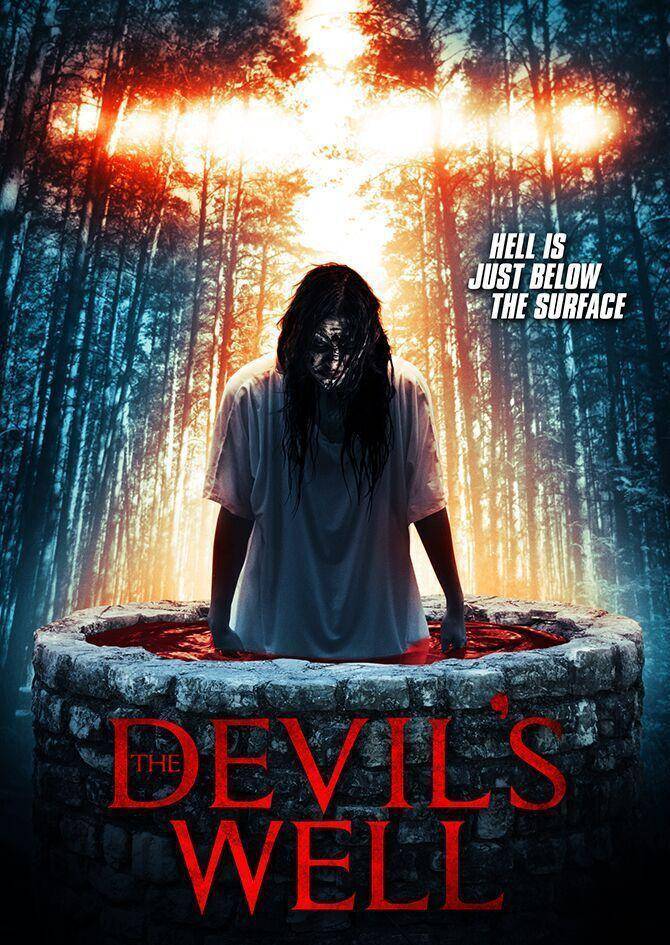 With the rise of Blumhouse Pictures horror franchises like Sinister, Insidious and Annabelle, it seems like the Paranormal Activity style of found footage films that made the company profitable has been banished to the cornfield. But Wide Eye releasing is going back to the well, if you’ll forgive the pun, to see if mixing the faux documentary style made famous by The Blair Witch Project with a Rosemary’s Baby demon darkness can send a tingle up our collective spines.

While the poster for The Devil’s Well will most likely cause flashbacks to Naomi Watts in The Ring, there’s no haunted video tapes here, just good old fashioned unsolved mysteries and local legends. The basics of the film’s plot are as follows:

Karla Marks mysteriously vanishes while conducting a paranormal investigation with her husband into the Devil’s Well, an underground location reported to be a gateway straight into hell, and the site of ongoing strange phenomenon. A year after her disappearance, a group of investigators go back to uncover the truth about Karla, and are faced with evil forces greater than they ever imagined.

The opening moments of the film are presented in a traditional documentary aesthetic as we are introduced to the known facts of Karla Marks’ disappearance and the legend of The Devil’s Well from several pretty convincing talking head interviews. 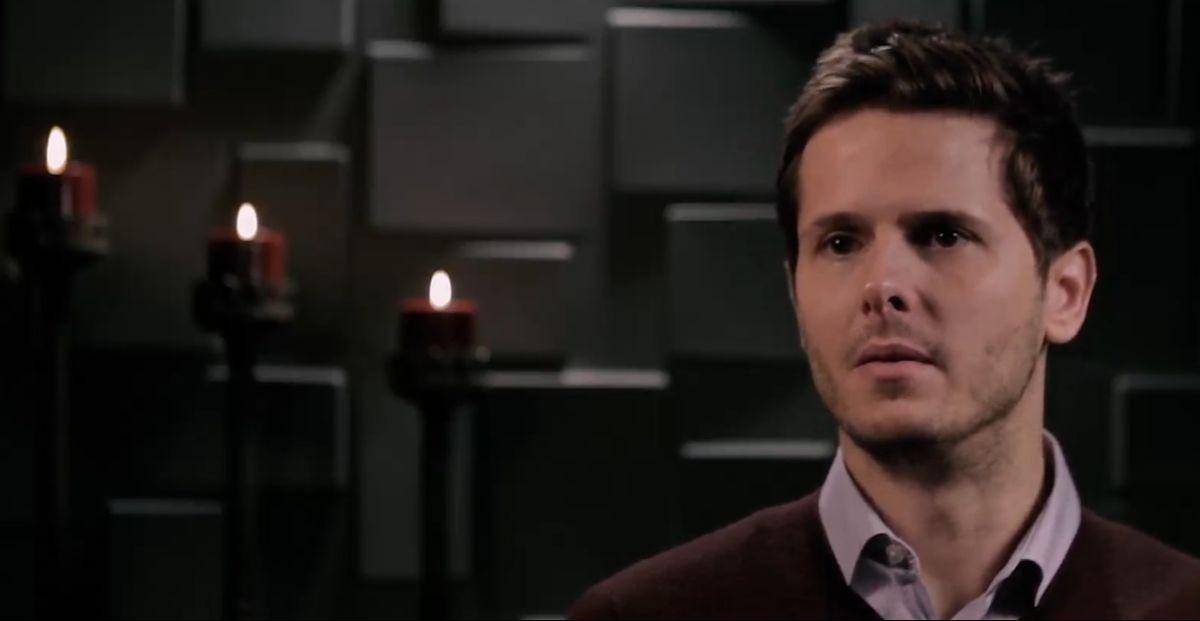 The sound bytes gathered from town historians, police officers and Karla’s parents are given an authentic feel through naturalistic performances by these actors portraying characters who ultimately don’t factor into the main narrative of the story. With the exception of the victim’s husband, Bryan Marks, who is the main suspect in her disappearance. 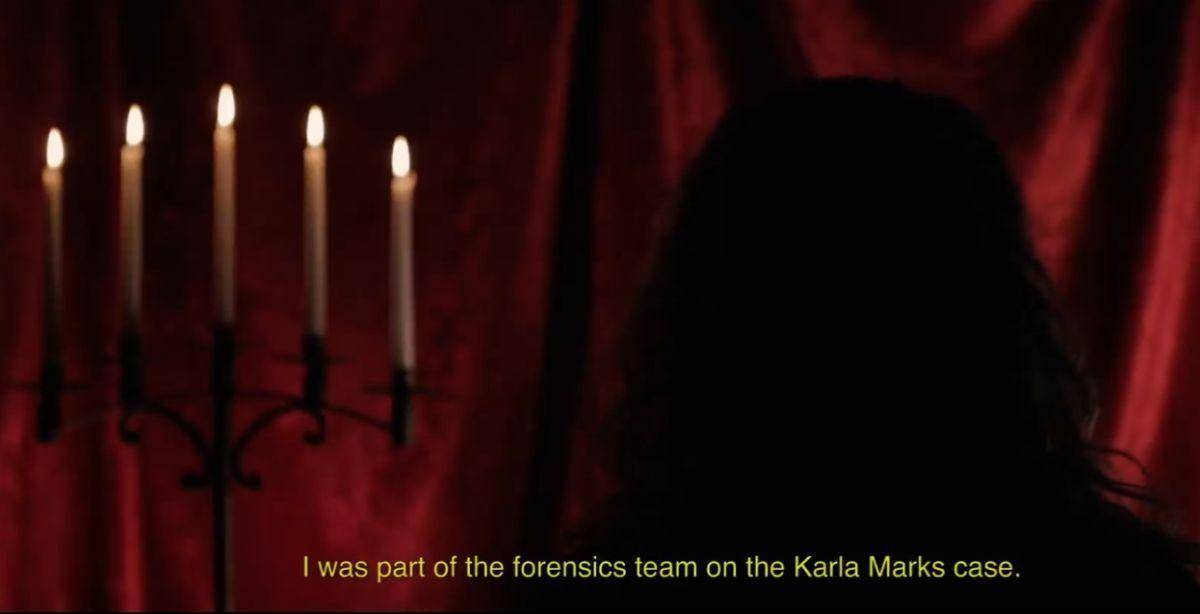 As an avid viewer of crime and supernatural documentaries, I found these clips to be very impressively staged, with the exception of a few distracting candelabras in the background that seemed to be evoking gothic horror iconography for a story that does not fit into that sub-genre. It’s not enough to distract from the information being shared by the interviewees, but still an odd bit of set dressing.

The most important tale shared in this opening segment is that of a police officer who infiltrated a Satanic ceremony in the 1980’s, receiving a knife to the back for his troubles, but managed to take out one of the supposed Satanists in the process. This establishes that the site does have a history of violence and is the subject of many local legends prior to the most recent incident. 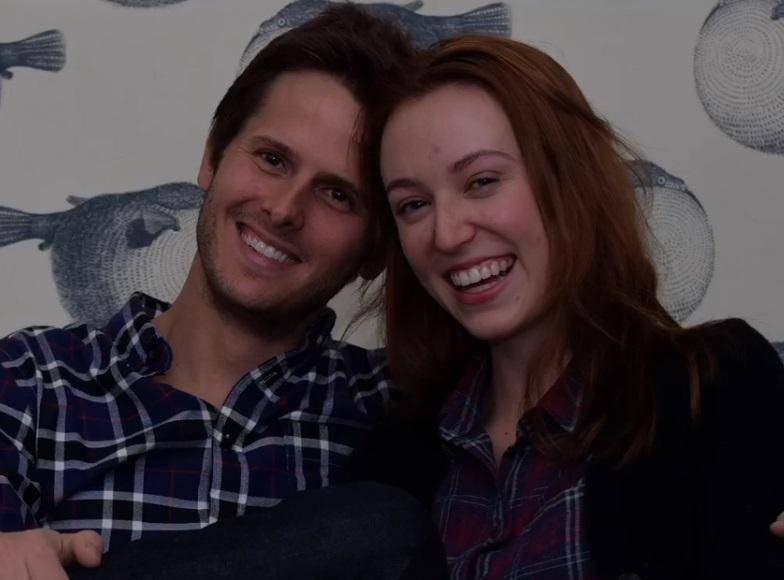 On a side note the victim, Karla Marks is played by Anne-Marie Mueschke, who in photos used in the film’s opening appears to be a dead ringer for actress Deborah Ann Woll, most recently seen playing Karen Page in Netflix’s Daredevil series. In fact I thought Woll was in the film for the first 5 minutes before checking the credits to find that she is not associated with the production. But what about the cast who actually do appear? 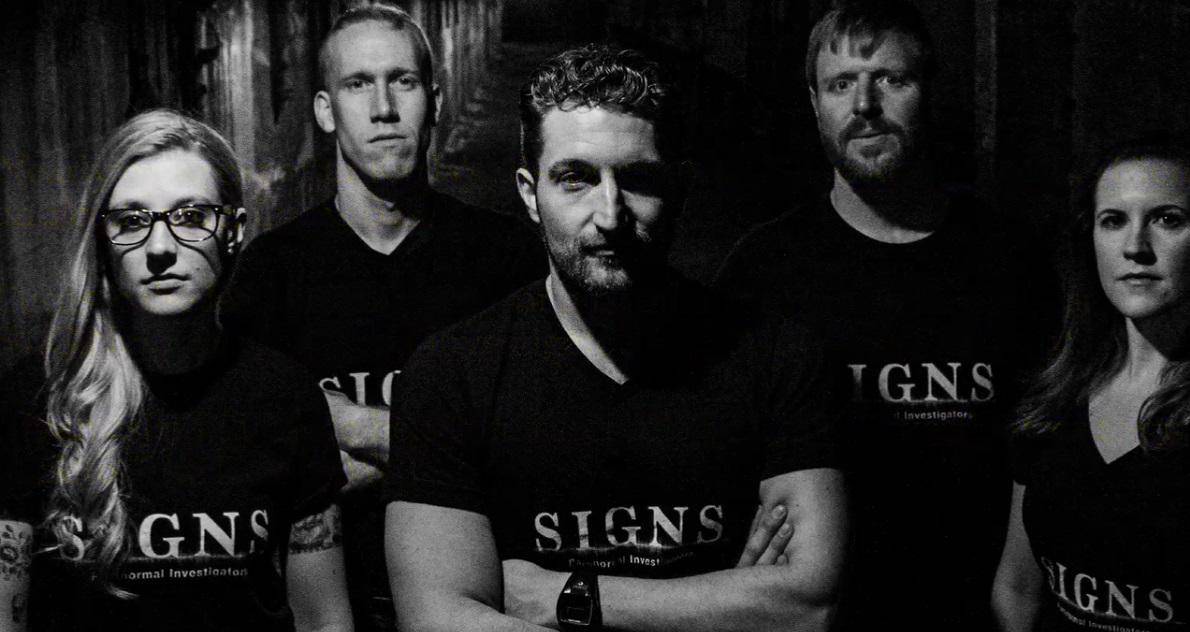 The main cast is introduced about 30 minutes in as Bryan Marks recruits a group of fellow Paranormal Investigators called the SIGNS team to help him gather evidence of supernatural shenanigans at The Devil’s Well that will clear his name. Though Bryan hasn’t been officially charged by police due to lack of evidence, the daily judgement in the eyes of society is taking its toll. His simmering anger seems to hide a darker side and possibly sinister intentions. 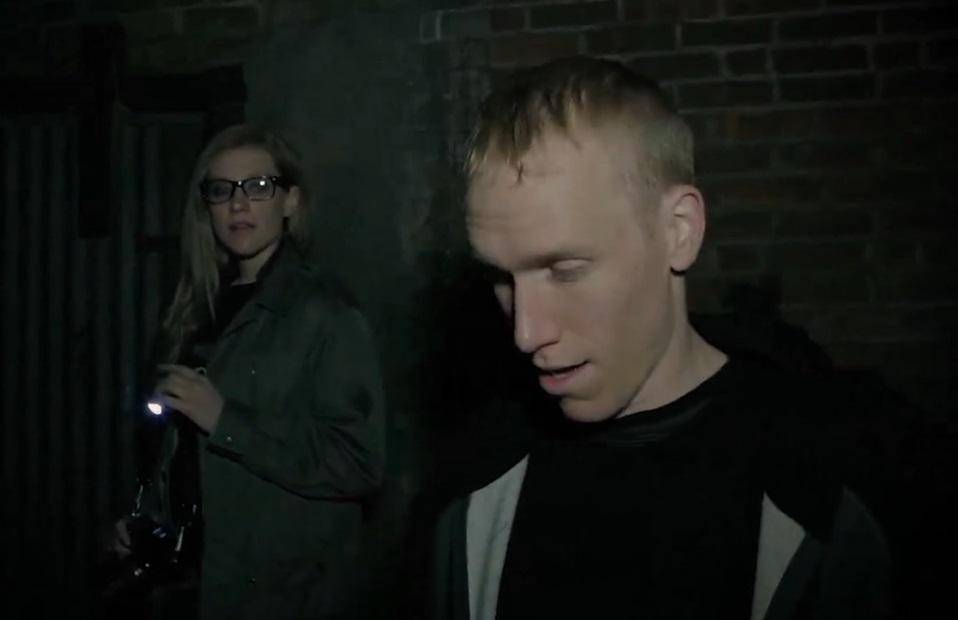 SIGNS consists of Lucas, the team leader and his psychic sister, Lynn who immediately admits to having “a bad feeling about this”. Also along for the ride are the nerd cutey, Riley and gun-toting former soldier, Kris who are accompanied by cameraman Kurt (played by the director) as they wander many dark corridors with tiny flashlights and walkie-talkies.

Bryan spends most of his time in the control center with the team’s resident skeptic and tech coordinator, Dennis who doesn’t mince words about his distrust of Bryan, thinking the return to The Devil’s Well is all part of a publicity stunt for the Bryan and Karla’s own paranormal investigation website. 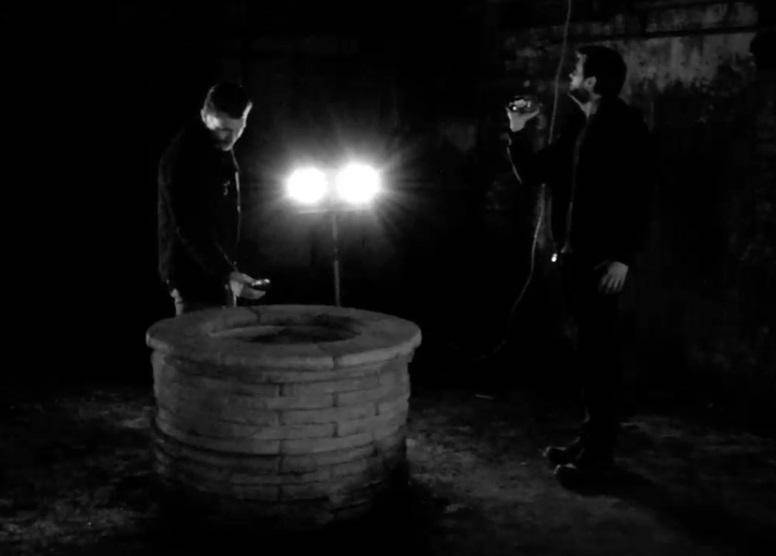 It’s with the introduction of this group that the film shifts from a documentary feel to found footage. What is the difference you ask? Mainly the use of security camera shots intermixed with handheld video to try and provide a more realistic scaring experience. Unfortunately, this is where director Spieler falls victim to the issues that seem to always plague found footage horror.

When the characters like Kris and Riley are on the move, investigating different sounds and meter readings there is a sense of reality in their performances and a kinetic energy from the camera movement. I don’t know how much of the film’s dialogue was improvised, but each character does stand out as an individual and we also get a little character development as they engage in several conversations about whether or not the well could in fact be a gateway to hell. 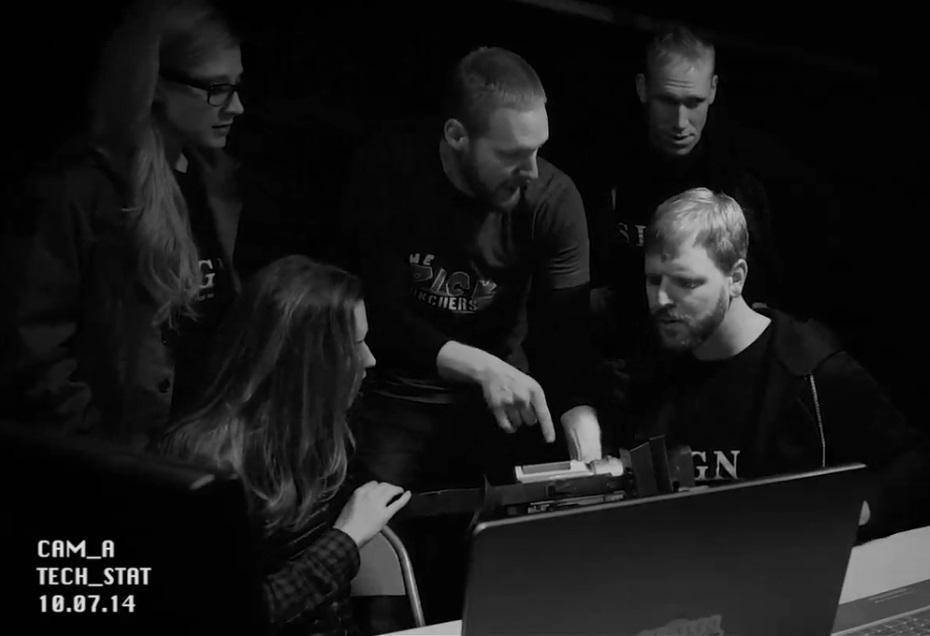 On the other hand, when the static security camera footage is focused on the less natural Dennis and Bryan, it all feels very staged with camera angles that are just a little too artistic for their own good. This is when the film becomes an obviously scripted narrative rather than helping us suspend our disbelief that this is a real-life expedition that was captured on film. If you can look past these few clunky moments, the film does manage to get the viewer engaged in the creepy atmosphere. 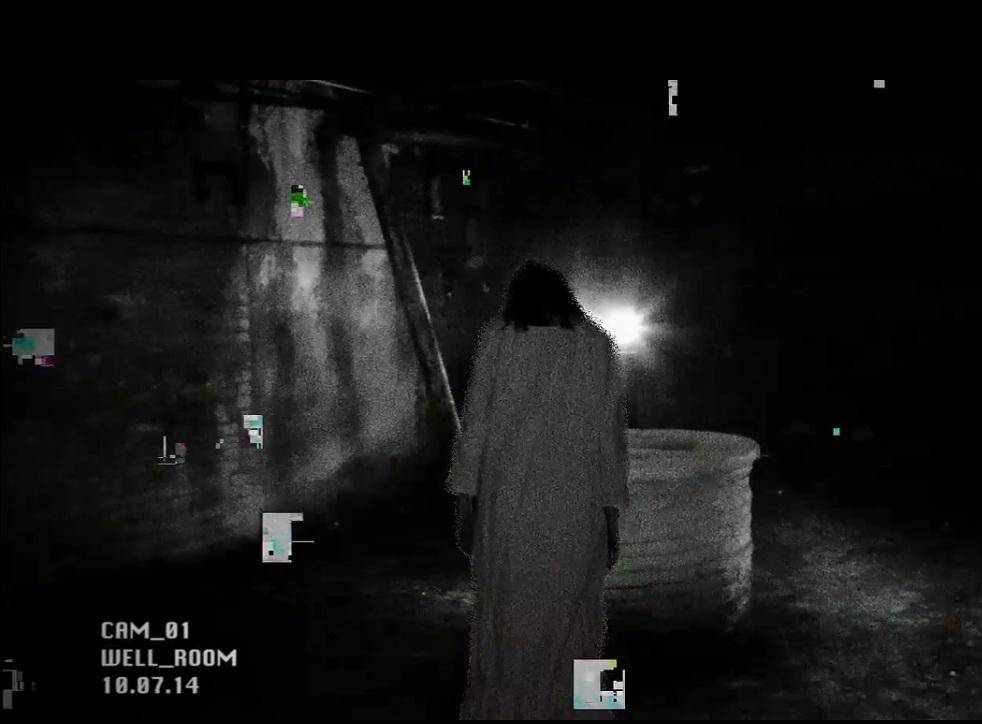 The scares don’t really begin until an hour into the movie when a mentally disturbed Karla turns up to the well room out of nowhere and Lucas attempts to get answers about where she’s been. These last 20 minutes reveal that Karla is not alone and in fact welcomes, “His” coming. Soon masked killers are coming out of the darkness and no one is safe. Tensions arise among the SIGNS team as accusations fly and people begin to die. 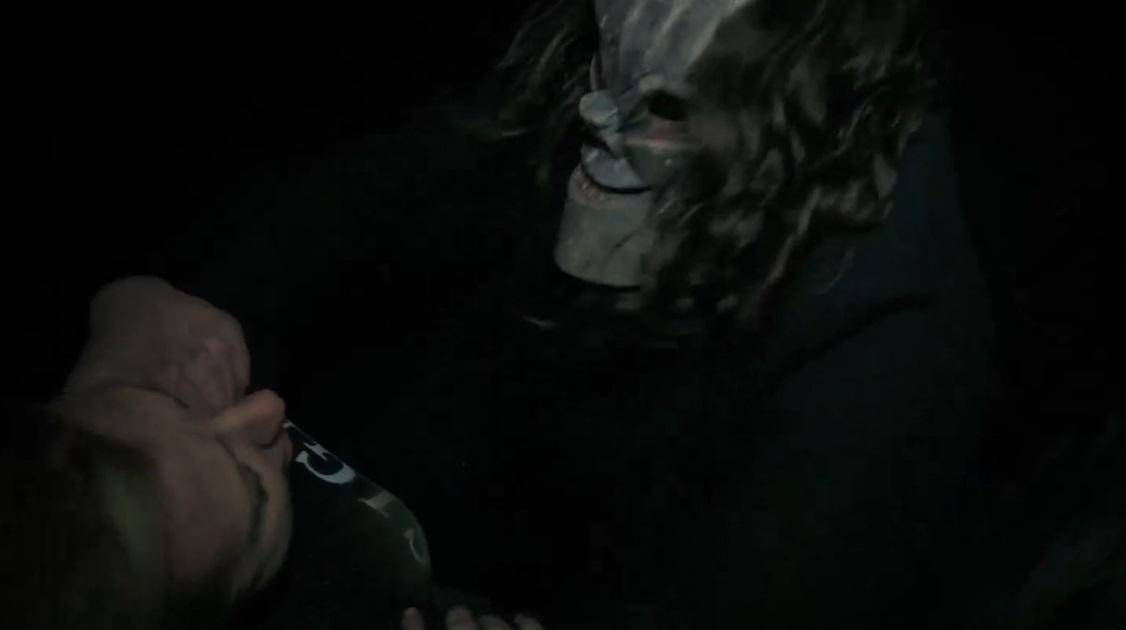 The deaths are brutal and sudden, given extra weight by the grotesque masks worn by the silent, killer Satanists. You actually do feel bad for the characters you’ve come to know during the course of the adventure as they become victims of this harsh violence, though the gore is more implied than blatantly flashed across the screen. 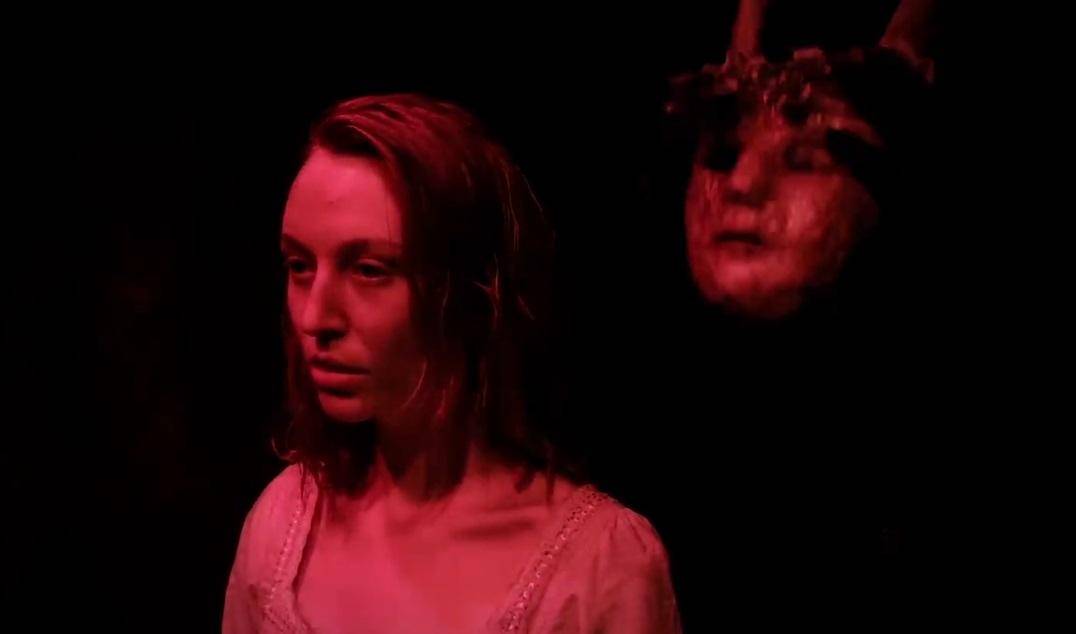 The Satanic ceremony that closes the film is standard for what you would expect, the only confusing bit is to who is holding the camera and using the zooming feature for maximum dramatic effect at key moments. We do see a figure eventually put down the camera and walk into frame, though it’s unclear as to why the group would want video documentation of their murderous activities. But hey, Satan Worshippers, am I right? What are ya’ gonna do? 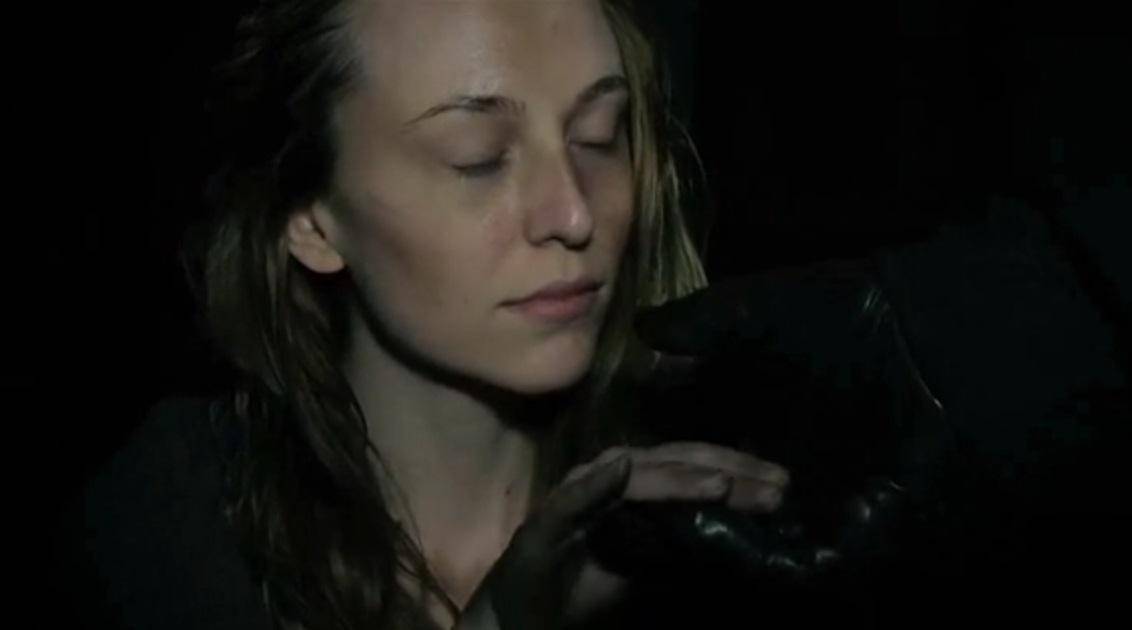 The Devil’s Well was a fun watch overall, with enough mystery set-up and peppered throughout to keep it interesting. The likable characters help the audience to be on their side and in turn, looked past some of the technical issues that could potentially draw attention away. There’s nothing overly shocking or groundbreaking here, but it’s a fun little horror adventure that’s worth a watch.

Get your first big scare of the New Year with Kurtis Spieler’s spine-chilling The Devil’s Well, on DVD 1/23 from Wild Eye Releasing.