Tangledeep is a very beautiful game that hides a harsh and punishing difficulty curve. It appears to be a paradise at first, but the game’s true nature rears its ugly head quickly. 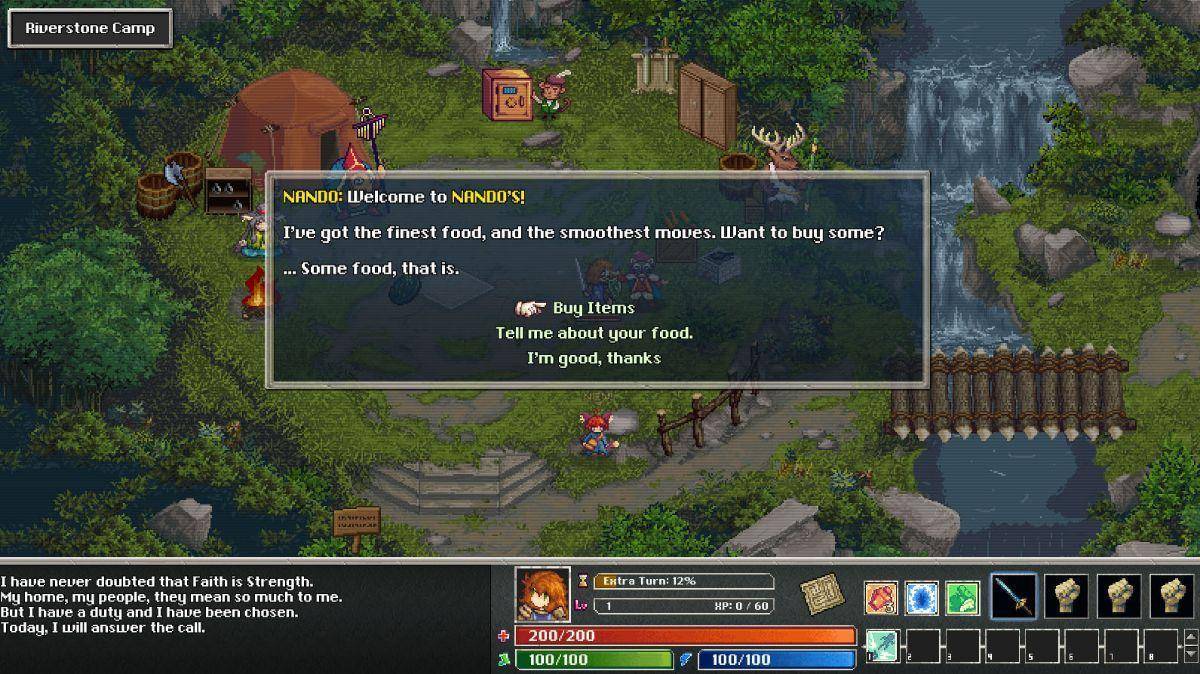 You start out in a small village in the middle of the forest, where everything you could need is conveniently within reach (the armor store, the food store, the recovery area, etc.) The village, as well as most of the game, is populated with colorful, likeable characters. Their dialogue is well-written and their personalities are vibrant. And the soundtrack — WOW! The music is beautiful. The game is almost worth a purchase just for what it sounds like.

Tangledeep itself is an expansive world with many, many branching paths to explore — and plenty of monsters that will get in your way and try to prevent you from doing so. You move through the world one step at a time, and so do they, so part of surviving is trying to predict where they’ll move next and how they can possibly be avoided. If not, combat is as simple as bumping into them repeatedly — you will automatically take a swing, then they will, etc. There are also magic spells and special moves you can purchase and utilize.

Your main source of recovery is a flask full of water that has a limited number of sips — when it’s empty, you must find the water fountain somewhere on the map to refill it. Your vision is restricted to just a few squares around you, but you can bring up a simple map at any time that shows the whole floor and the location of every baddie.

Now here’s where things get ugly. For those who want to begin Tangledeep, I have one crucial piece of advice: never die in the game. Ever. Spam those healing items like your life depends on it and be as cautious as possible. Because once you fail, you start digging yourself a hole and every step you take to correct it will result in more shoveling downward.

When you die in Tangledeep you resurface on the main merchant screen with half your hard-won currency and most of the XP you grinded for gone. Plenty of RPGs have mechanics like this, but you don’t truly witness the Game Over screen very often in Pokemon. It’s much easier to die in Tangledeep.

The difficulty ramps up fast. By your fourth floor, the monsters are more numerous and no matter how careful you are, you can easily find yourself boxed in by three of them, with your health rapidly dwindling and your healing resources spent. By the time you get the hang of the game you’ve racked up a lot of deaths in the process. Perhaps you could buy some items from the merchants to help you — except you can’t, because you keep losing all your money.

If you’re doing well, you can simply warp out of Tangledeep and back to the merchants, where you can safely heal (for a price) and buy more items, then return. I say “if you’re doing well” because the warp takes twelve turns to generate. If you’re on any floor higher than #3, you won’t have twelve turns to spare until you get rid of most of the monsters, and if you’re at the state where you need to heal, forget it. You’re dead.

What makes failure even more frustrating is that there is no such warp back to where you died. You must walk all the way back up through the floors you’ve already visited to progress further. This is when I found out the water fountains are one-use and when you return to Tangledeep, they’re gone. They don’t regenerate! But the monsters sure do. This means you must rely on your stock of food to survive. And that would be doable, if not for one flaw: you’re not allowed to eat the food all the time. If you’ve just eaten an apple or a banana, you can’t eat another one “for at least eleven turns” (or longer in some cases) which is plenty of time for a monster to beat that health out of you and then some.

When you first create a character, you’re allowed to choose two extra abilities from a list of twelve. Being new to the game, I leaned toward the abilities that would most help me defensively. I picked Quick Step, which grants you a bonus turn against monsters you encounter before they can strike you back. Unfortunately, I discovered Quick Step needs to charge up first — which wouldn’t be a problem if the meter remained charged. It doesn’t. When the meter is full, you can only use Quick Step AT THAT SPECIFIC TIME. It automatically uses itself up! Naturally, this always occurs when no monsters are around at all. It was no help whatsoever.

My only hope at this point was to grind away on the easier maps before I tackled the tough ones again. And to my horror I discovered I couldn’t even do that! When you get to a higher level, it takes significantly more XP to ascend to one even higher. That’s normal for a lot of games but the balance isn’t so out of whack usually. The monsters on the gentler levels gave me 1 or 2 XP and I now needed over 700. The only way to level up faster would be to walk up to the higher levels, where I would most assuredly die and lose that XP anyway.

The game tried to be “helpful” by giving me suggestions on how to not flop on my next attempt. “You had at least one item in your inventory that could have helped you!” it said when I died. You mean the food I wasn’t allowed to eat yet? Great.

While the roguelike genre is known for its difficulty, the best examples in the genre are fair — if you pass out it’s your own fault, not the game’s. They also give you an ant’s chance of progressing without getting beat down again until you can’t stand it. As it is, Tangledeep is very frustrating, in areas where it doesn’t need to be. It may have pretty music, but smooth tunes aren’t everything.