Surge of Power: Revenge of the Sequel – Movie Review

Need your fix of super-hero cinema before Black Panther pounces into theaters this February? Well Surge of Power: Revenge of the Sequel is a January release that’s got more comic book fun and celebrity cameos than you can shake a pyramid tipped rod at. Don’t worry, it’ll make sense later. 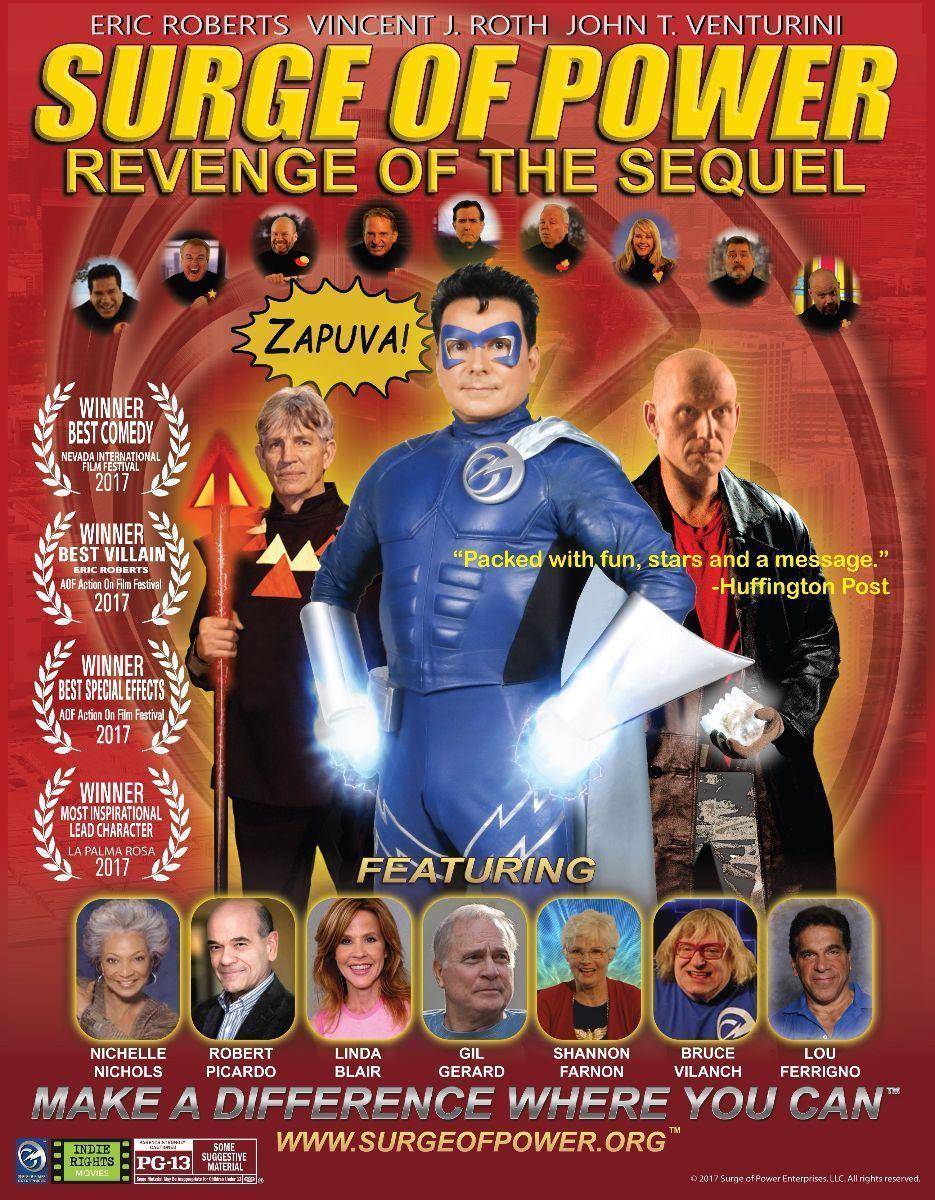 As a comic book reader for nearly 3 decades I was curious to see what this Surge of Power sequel was all about, especially since I hadn’t heard of the original. Though judging by the plot and tone, creator and star, Vincent J. Roth is obviously in the same boat. By that I mean he’s definitely a long time comic book fan, not someone who hadn’t seen the first film, that would be…odd. 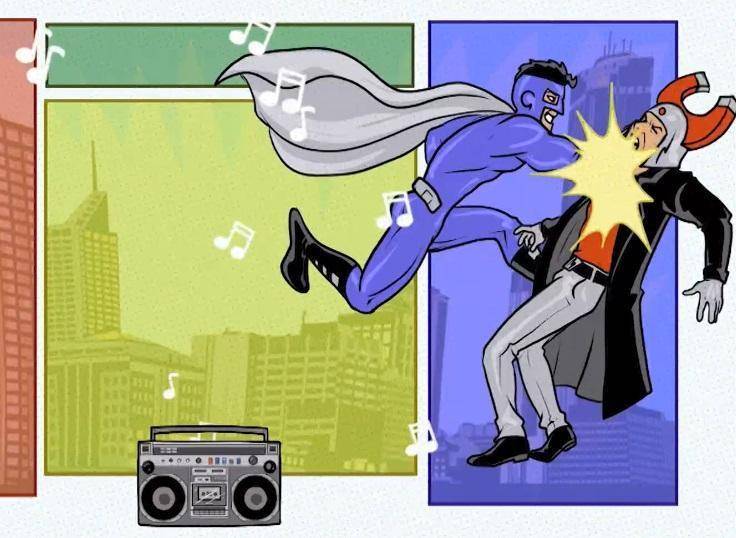 Luckily the film features some flashback scenes in both animated and live action forms to catch us up on the lore of the Surge of Power universe, but what is this movie all about, you ask?

Surge is cinema’s first out gay superhero and encounters his nemesis, the Metal Master, who has been released from jail and is trying to reconcile with his estranged parents while being convinced to return to a life of crime by infamous villain, Augur. Surge pursues Metal Master to Las Vegas where his enemy is on the hunt for mysterious crystals. Back in Big City (Surge’s hometown), Augur emerges from the shadows causing legendary hero Omen to step into the fray, which alerts The Council, a supervillain cabal bent on world domination.

Now you know the plot, but let’s get into the fun, because Surge is a super-hero romp whose true super power is activating our fanboy fanaticism. Roth has assembled a star-studded cast of familiar faces from the realm of sci-fi television and film that will hit your nostalgia button hard and have you shouting, “Zapuva” (the caped heroes battle cry) in between guffaws. 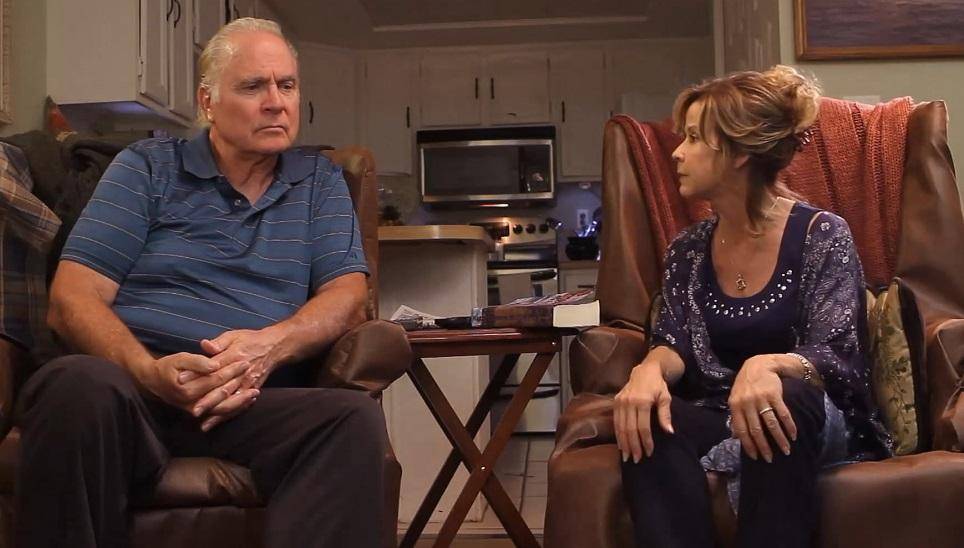 Not only does Roth have Buck Rogers In The 25th Century star Gil Gerard coming down to Earth to play the struggling homophobic father of Magnet Master, but he’s paired the space faring hero up with that little devil, Linda Blair from The Exorcist as the villain’s mother. This storyline is actually very sweet as the mother seeks to guide her frustrated husband into accepting his son for who he is, super-villain tendencies aside. 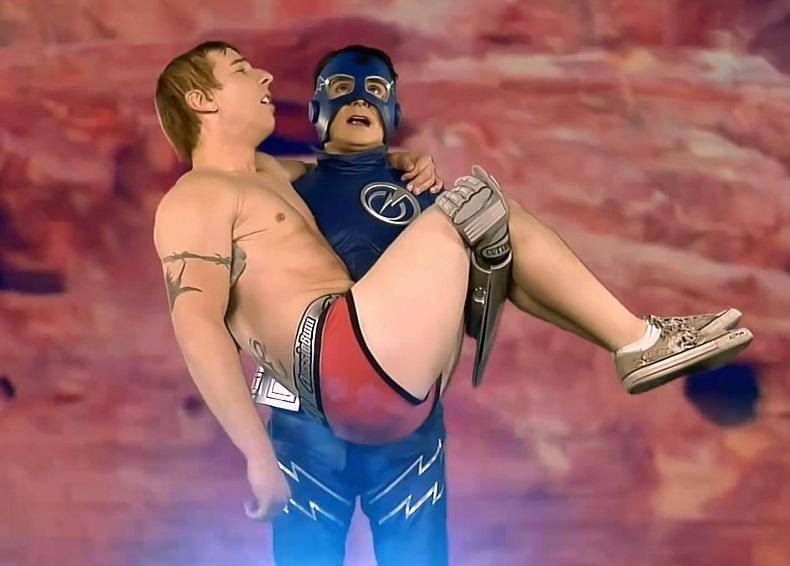 Surge of Power: Revenge of the Sequel doesn’t use the the X-Men metaphor of mutation to deal with the issue of bigotry towards the gay lifestyle, it heroically faces it head on. Issues of prejudice are not the focus of the story, but are dealt with in terms of character motivations and a few small-minded antagonists. 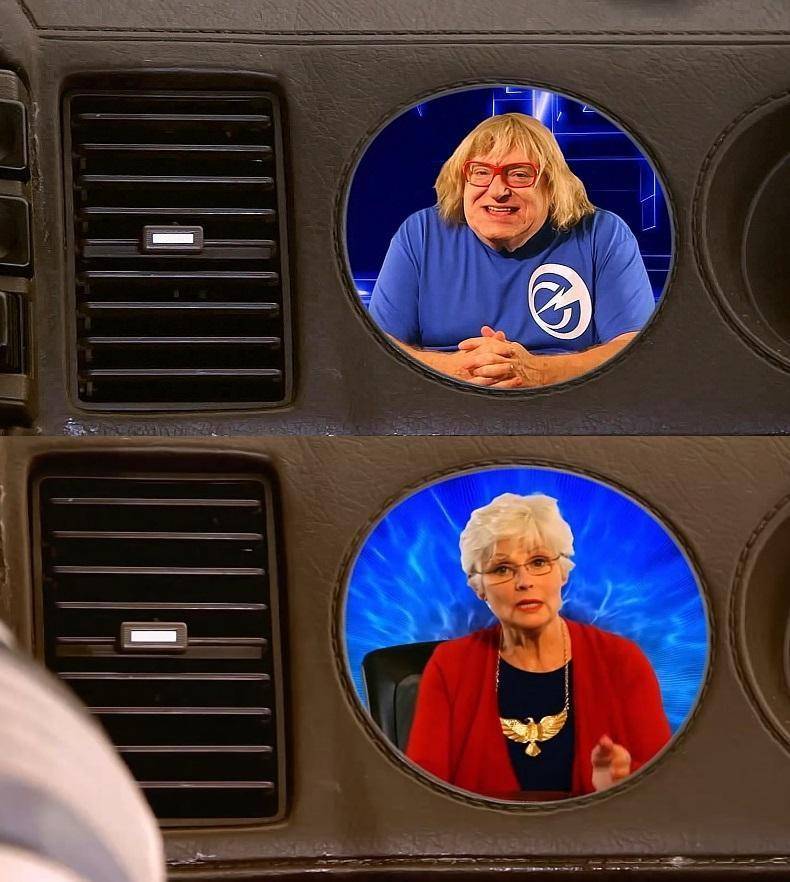 Surge even has a date night on the Las Vegas strip with a starstruck fan he has rescued thanks to the encouragement of the match-making artificial intelligence in his K.I.T.T. style Surgemobile, played alternately by Hollywood writers room mainstay Bruce Vilanch and Shannon Farnon, the original voice of Wonder Woman on the Superfriends cartoon. 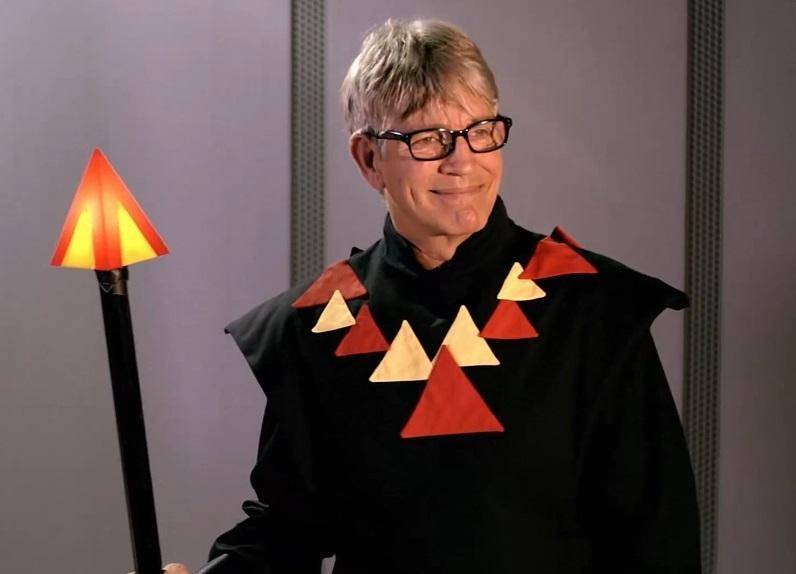 The true big bad of this story is veteran actor Eric Roberts as Augur, who plays the devil on the shoulder to Surge’s arch-foe Magnet Master (who the film calls out as basically being Magneto). Roberts has faced off against Batman in The Dark Knight and even Doctor Who in the failed American backdoor pilot/TV movie in the 90s, but now he’s taking on Surge and carrying a big stick…with a pyramid on it (See, I told ya it would come back). 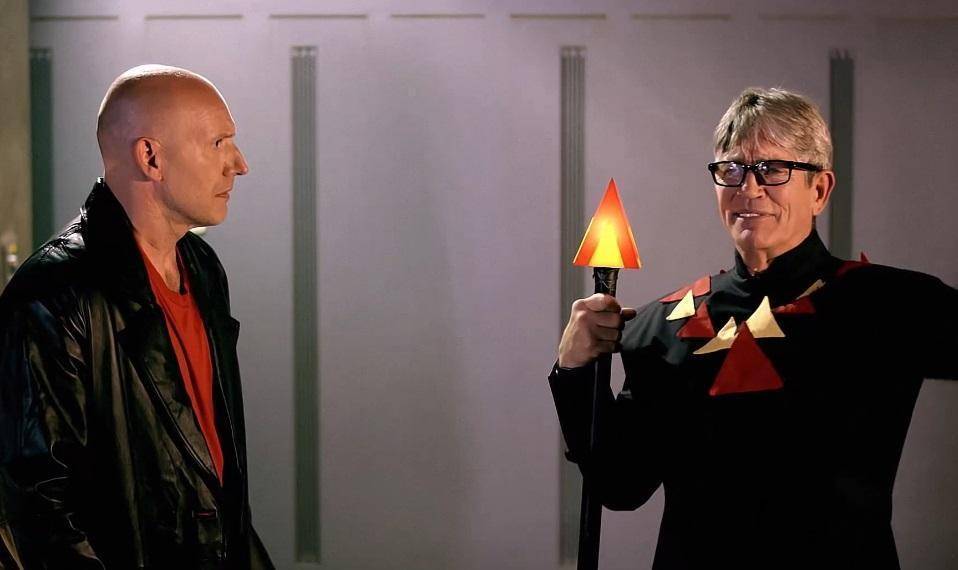 Roberts is a hoot, dangling the promise of a decent super-villain gig in front of Magnet Master while relegating him to the role of henchman. The initial meeting between the 2 villains is quite fun and frankly, any film that can make a Spinal Tap reference within its first 5 minutes will have my support. 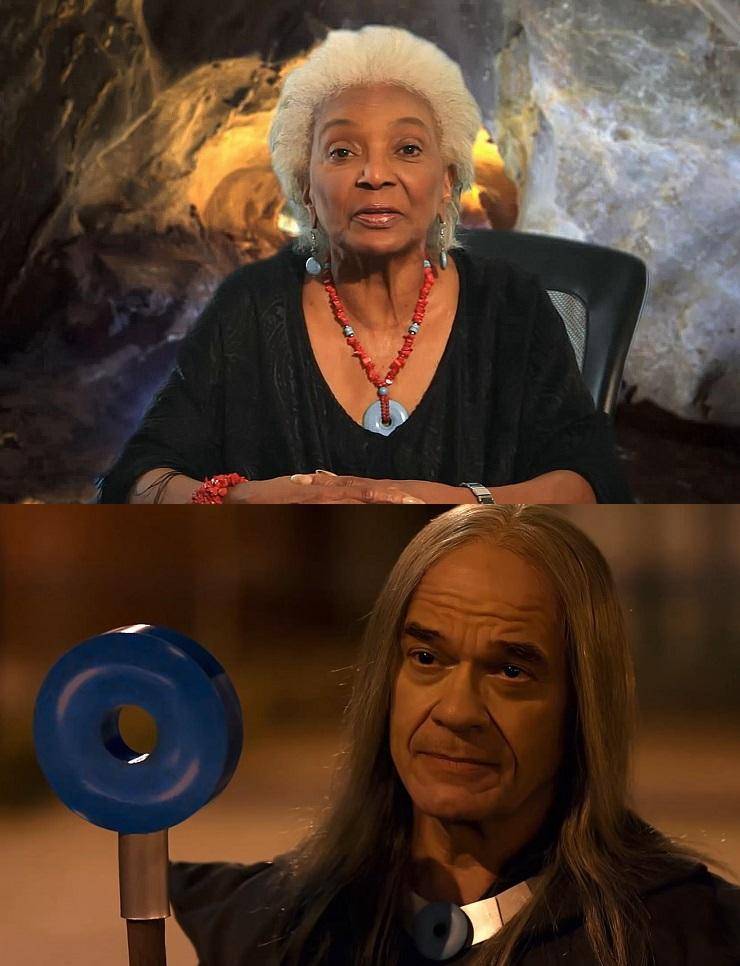 There’s even a hilariously prolonged famous movie one-liner battle between the dastardly Augur and virtuous Omen, a dual role played by Star Trek alumni Nichelle Nichols and Robert Picardo. I can’t think of another film bold enough to make that claim. Roth does know how to give genre fans what they want, but that’s not to say the film is without its faults. 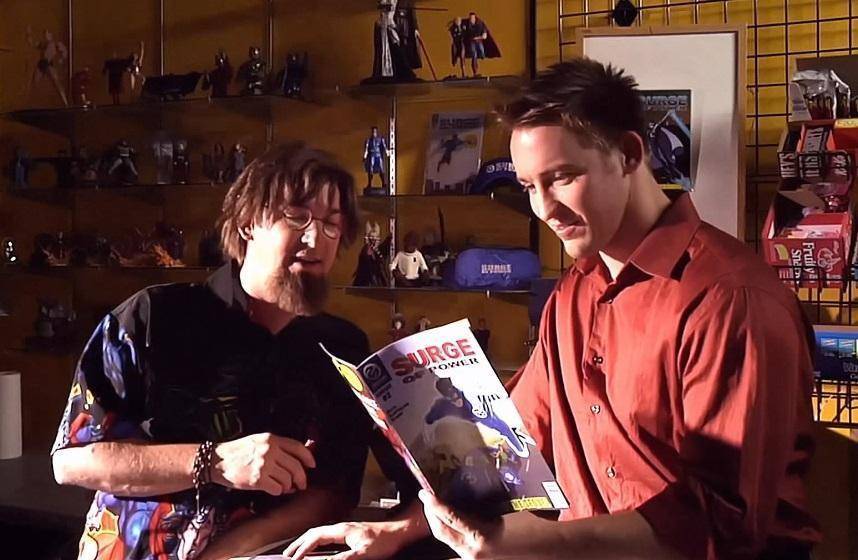 Surge of Power: Revenge of the Sequel is obviously a fan produced project and as such, the storytelling is kind of lackluster, with long scenes of exposition about the nature of Surge’s powers being inserted to fill time. Additionally there’s quite a bit of attention given to the sights of Las Vegas, though this section does contain a great gag about the magic crystal macguffin being called “CelineDionium”. The film also comes to an end very quickly after a bit of meandering, using a comic book store narrative wraparound as an excuse to “flip to the end” and conclude on a cliffhanger. 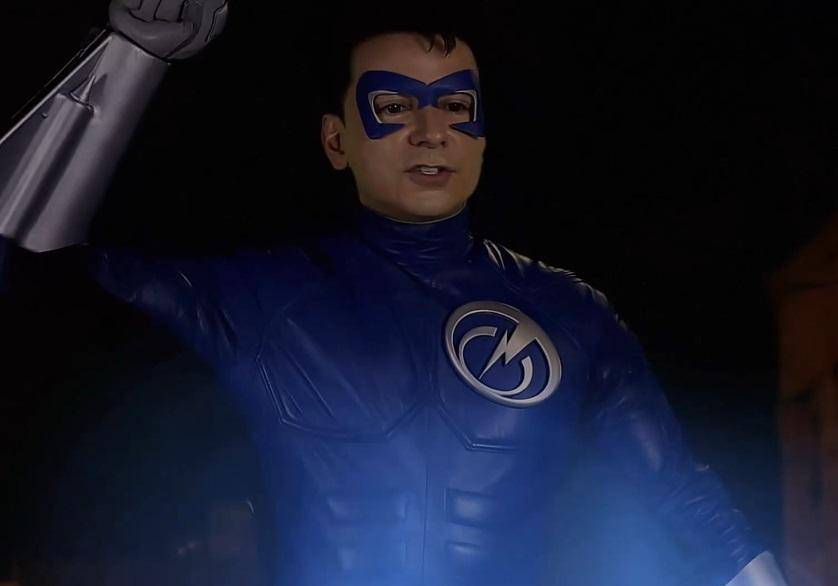 Roth makes Surge very likeable hero with a positive attitude no matter the circumstance and his catch phrase of “That really pickles my pipe” is charmingly ridiculous, even if Roth himself may not be the most seasoned actor. As someone who has also, written, directed and starred in my own silly super-hero movie series, I can cut Vincent a little slack as I understand how there is a certain amount of distraction to giving a decent performance when you are wearing multiple hats on a production. 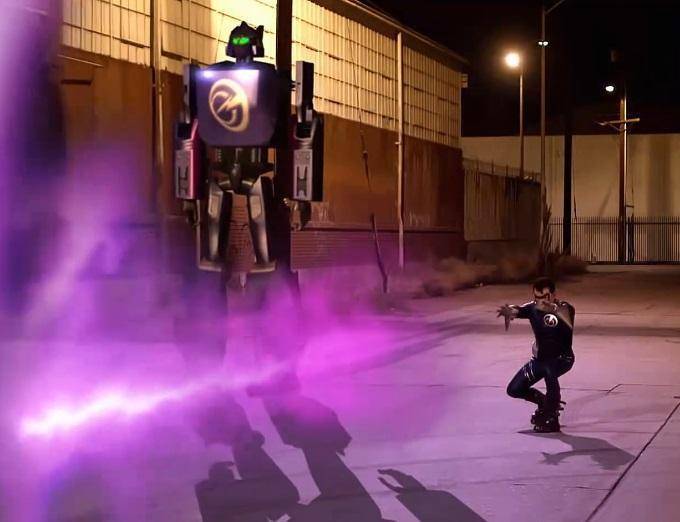 All that being said, there are some fun uses of CGI in the film. For example, when Surge confronts Augur in an alley, not only does his car convert into a Transformer style robot, but our hero shows off some decent looking energy powers and there’s no disputing the awesomeness of the sequence where the Surgemobile converts to flight mode. 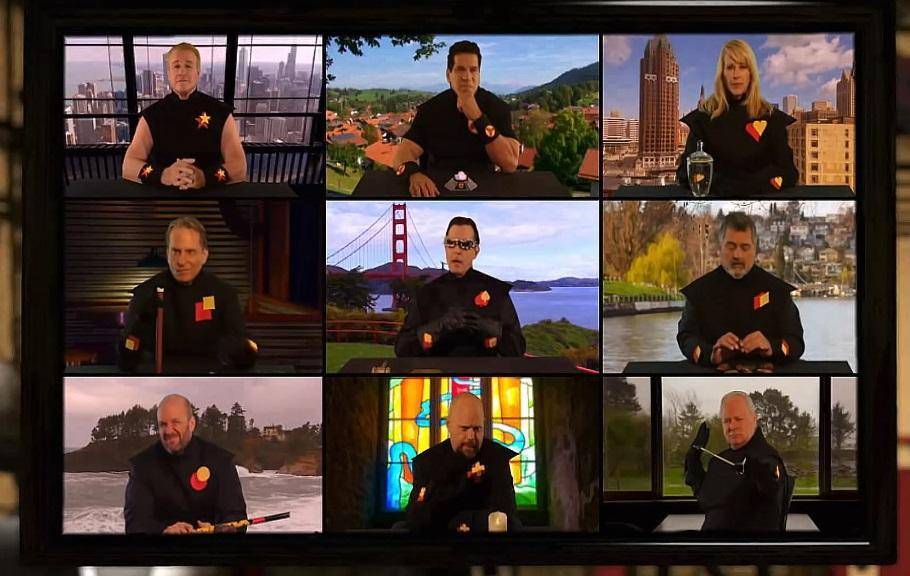 As mentioned before, the entertainment factor for Surge of Power: Revenge of the Sequel rests mostly on its cameos which by the end finds 9 actors crammed into a single grid on screen forming The Council. But you won’t hear me complaining when one of those actors is Lou Ferrigno and 4 cast members of Roger Corman’s famously unreleased Fantastic 4 film. It’s these kind of deep pull casting choices that reveal the filmmaker’s true passion for the genre. 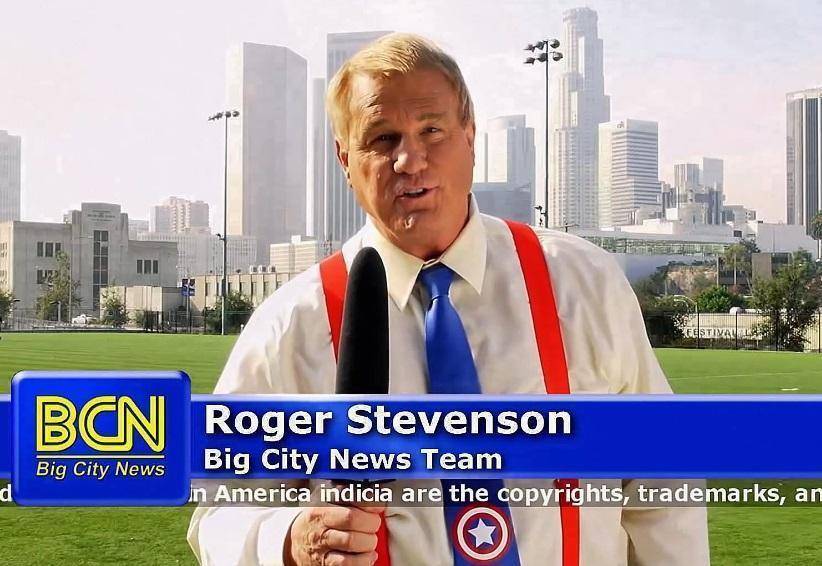 One final recurring cameo I’ll mention is Reb Brown as TV news reporter, Roger Stevenson who is constantly wearing different styles of Captain American ties. For those not in the know, Brown played Captain America in two 1970’s made for TV movies and garnered multiple nicknames from the Mystery Science Theater 3000 crew for his role as Slate Fistcrunch, no, Buff Hardback, er, Blast Hardcheese in the Space Mutiny episode of the cult classic series. 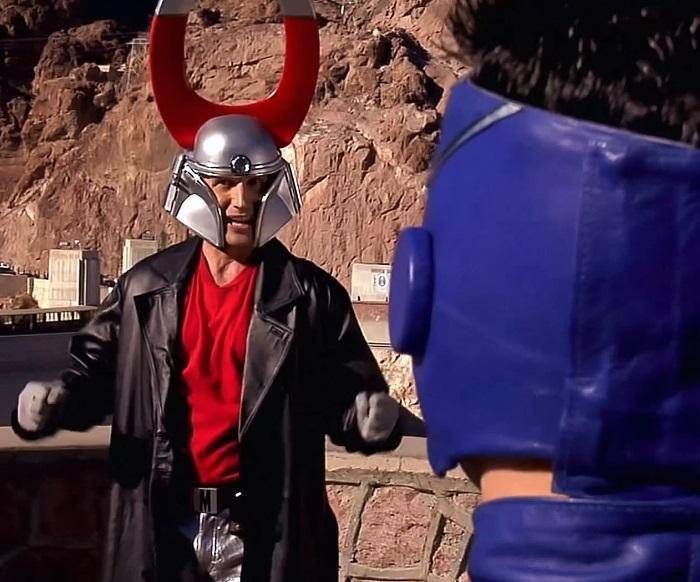 In the end, Surge of Power: Revenge of the Sequel is akin to Mark Hamill’s mockumentary film Comic Book The Movie in that portions were seemingly filmed over the weekend of a Las Vegas ComiCon and pulled many notable convention faces in front of the camera to play along. But despite the cameo cramming, the heart of the film is pure and it delivers just the right kind of fun.

Indie Rights is releasing Surge of Power: Revenge of the Sequel theatrically on Friday January 5th in Los Angeles and January 19th in New York with plans for expanded screenings throughout the year, so get your Surge on!

2047 Virtual Revolution – Movie Review Miiverse Is Back — In Archive Form