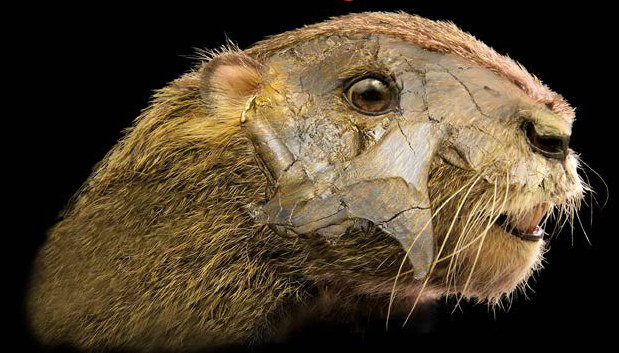 Just look at that little guy. Doesn’t he look like he’d give Bill Murray a hard time in a prehistoric Caddyshack prequel?

A well-preserved Mesozoic fossil from Madagascar and detailed analysis has given scientists a new perspective on the cute varmint, Vintana sertichi. Vintana, a member of an extinct group of mammals, gondwanatherians, didn’t fit the stereotypical mold of the tiny mouse-like critters scurrying under the feet of thunder lizards we imagine when we think of the early mammals that lived alongside the dinosaurs.

Instead, according to the findings of the scientists, Vintana was a “badger-sized, herbivorous animal that was agile and active, with keen senses of smell, vision, and hearing.” It shows there was more diversity among Mesozoic animals than commonly thought.

Earlier gondwantherian finds had been limited to a few teeth and fragments, so the mammal group was poorly understood, but that changed with the discovery of the fossilized skull of the Vintana, which was nearly intact after scientists meticulously removed it from a block of sediment.

Researchers created detailed 3D computer images of the skull inside and out with CT scans, and that data has been preserved through a detailed memoir published n the Journal of Vertebrate Paleontology and  interactive 3D images for future paleontologists to study. A diverse team of scientists worked with editor and lead investigator David W. Krause of Stony Brook University to study Vintana and put together the data.

“With this monograph, the shroud of mystery over the enigmatic, extinct mammal clade Gondwanatheria is lifted. Through CT scans, the amazingly preserved skull of Vintana sertichi is dissected, described, and reconstructed. The authors breathe life into this fossil by reconstructing its brain, inner ear, jaw musculature, orbit, and nasal cavity, and set the bar high for how such studies will be done in the future,” John Wible, of the Carnegie Museum in Pittsburgh and one of the experts on the investigation who analyzed the skull and ear region of the fossil, said.