There is a particular problem, not really associated with other forms of media, that plagues video games that aim to lampoon the industry. While other types of parody simply have to be funny to be considered a success, a game has to pull this off while simultaneously managing to still be a decent experience to play. Otherwise the joke, and the title itself, will simply fall flat. This is the challenge that faces Rise & Shine, a video game that draws almost all of its inspiration and humor from the industry it is part of.

Rise & Shine sets its tone very early. The plot begins with the player being introduced to the protagonist, a young boy named Rise, who has to take on the mantle of hero when he comes across a legendary sword known as Shine. Together, the two must battle a horde of invading evil space grunts while they try to reach a mythical location that cane somehow stop the threat and restore some semblance of peace to the planet of Gamearth (see what they did there?) where the action takes place. 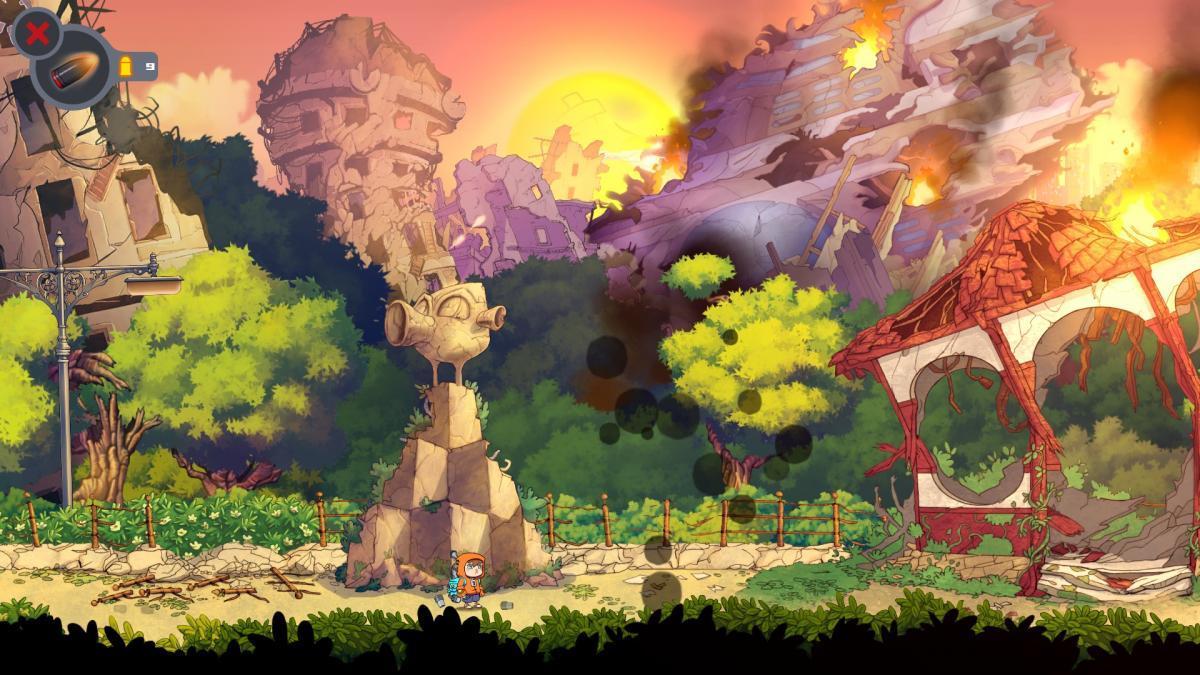 The game is a sort of combination between the likes of Contra, where you have to take out waves of enemies in a run-and-gun style, and a puzzler that involves overcoming obstacles and finding out the ways to defeat bosses other than simply shooting at them. It’s a rather distinctive type of gameplay that works incredibly well.

As you progress through the fourteen levels on offer, Rise learns a number of new abilities. These aren’t just more impressive ways to kill enemies either, but essential components to getting through the stages. One example is a remote controlled bullet that you can guide through the debris to reach a specific item, while another includes an electric pulse that can turn on devices in the environment. This not only allows for the developers to devise some rather clever puzzles but also ensures that the action is kept fresh at all times thanks to the added variety.

This can also leads to some intense moments that can become overwhelmingly difficult almost instantly. For skilled players of this genre, Rise & Shine will probably last less than two hours but for those who aren’t familiar with or have never completed games like Metal Slug, it will likely take significantly longer. Several boss fights have the opportunity to last up to an hour themselves – something that can severely test your patience with the title when you simply don’t seem able to progress. 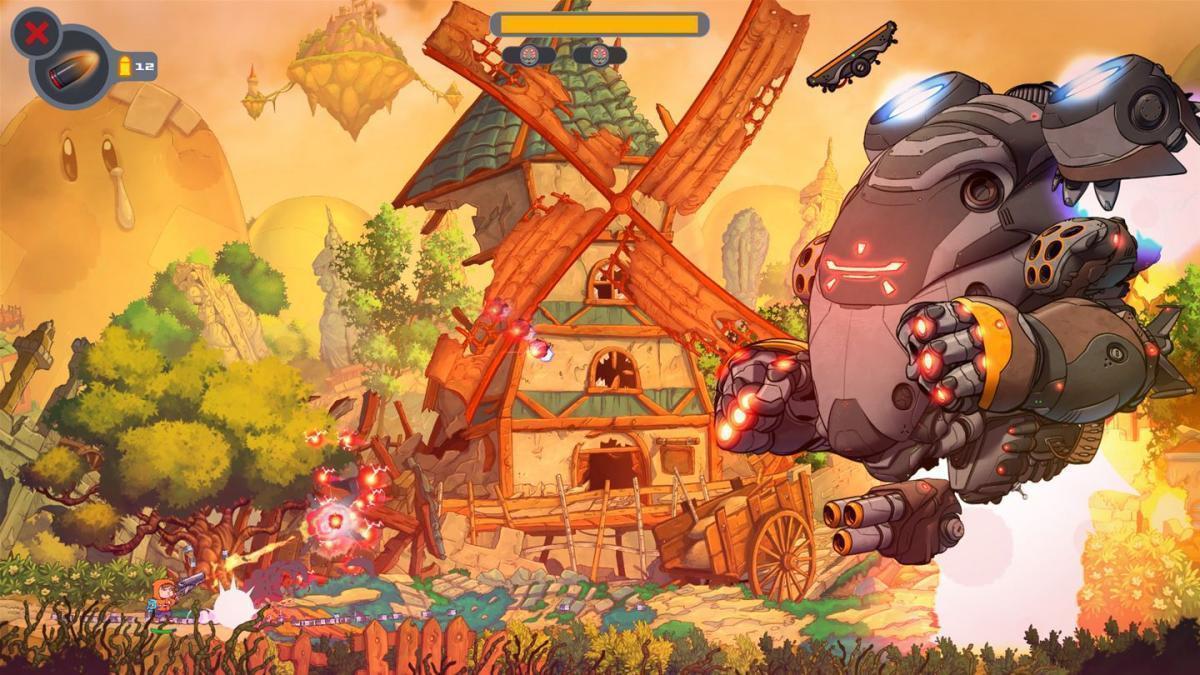 The fact that you have to balance between shooting at enemies, dodging attacks, and avoiding obstacles is what makes this game so fun but it can also become a little too overpowering in certain situations. The added constraint of having to reload the gun rather than it simply firing with an infinite amount of ammo as it usual for this genre certainly ups the difficulty in some parts. However, for the most part the gameplay is very fun and is enjoyable even for those not well versed in the ways of Contra.

Where Rise & Shine really stands out is in its presentation, though. Anyone playing will instantly notice the vivid colors and detailed backgrounds. It is difficult not to be taken in by just how beautiful everything looks on screen, from the design of the enemies to the environment that surrounds you. You can really feel the attention to detail that the developers have put into making Rise & Shine look so good and there is plenty of variety in every scene, including a host of easter eggs. Even the animation is superb, with the bosses in particular having an impressive array of movements.

The humor from the parody and satire of video games can hit the mark at times but it seems to miss more often than not. While there is some rather interesting and funny conversation to be had between the characters, most of the jokes are centered on brief cameos by characters who are cheap knock-offs of established superstars. The likes of Link, Mario, Marcus Fenix, Snake, and Red from Pokemon all make an appearance, yet they are usually only shown so that they can be viciously killed. 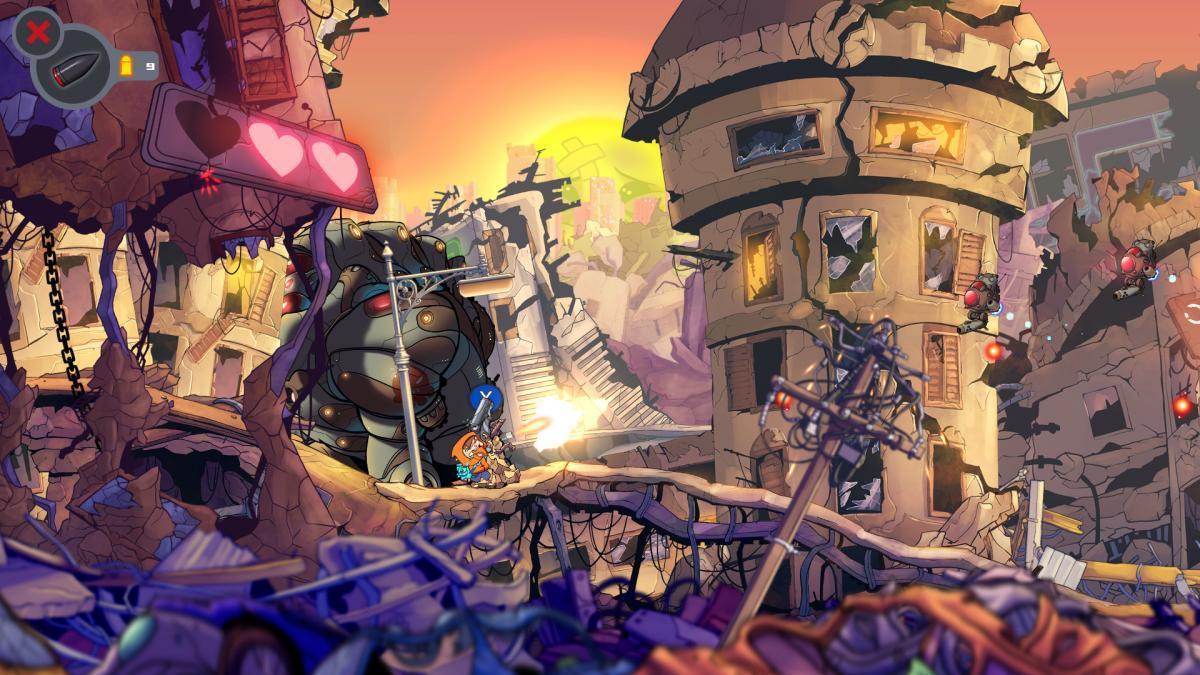 After a somewhat rocky start, Adult Swim Games I now putting out some very good games with interesting concept. Headlander by developer Double Fine was one recent example of this but Super Awesome Hyper Dimensional Mega Team’s Rise & Shine is equally as good. It manages to combine the frantic action of a run-and-gun game with an intelligently designed puzzler, forcing you to think about exactly how you will proceed rather than simply blowing through enemies, It can become frustrating at times due to its difficulty, but this is easy to forgive when you see just how gorgeous the title looks.

This review is based on a digital copy of the game provided by the publisher for review purposes. Rise & Shine is currently available across multiple platforms, including PlayStation 4, Xbox One, and PC.