Like many of you, I was shocked to hear of the death of Robin Williams on August 11th, 2014. Williams’ work was an essential part of so many of our childhoods and continued to be so as we grew into adults. I would like to share some memories of my favorite work from this much talented comedian.

For example, I watched “Sesame Street” on television well into my 20s. This was a problem with several of my teachers, who felt that I was too old to be watching the show and didn’t want me to mention it in class. My reason for watching was because I loved seeing the celebrity appearances on there, and through YouTube, I once more came to see Robin Williams’ appearances on there. There were two appearances that I thought were very funny.

In the first, Elmo (Kevin Clash at the time) is sitting by himself when Williams walks by with a stick. Elmo asks Williams what he can do with the stick, and Williams goes into an improv session that would’ve made Jonathan Winters (his friend and mentor) proud. Within the span of about a minute-and-a-half, he comes up with all sorts of ideas and impressions. I particularly liked the Lawrence Welk and John Wayne impressions.

In the second, Williams, on his own, talks about how to tell if something is alive, and uses his shoe for demonstration purposes. He once again comes up with hilarious lines off the top of his head. I thought the dog referenced was funniest of all. He ends up putting his messy shoe back on his foot and makes a few final jokes, and you can hear the “Sesame Street” crew laughing in the back.

Williams also had a sometimes contentious relationship with Disney, and as a young Disney fan, I enjoyed the work he did with them. In the first few years of Disney’s Hollywood Studios, back when it was Disney-MGM Studios and was an actual working studio, Williams and Walter Cronkite appeared in a film preceding the tour of the animation studio. It’s difficult to recall details now, since I only saw it once and was a child at the time, but it was funny. 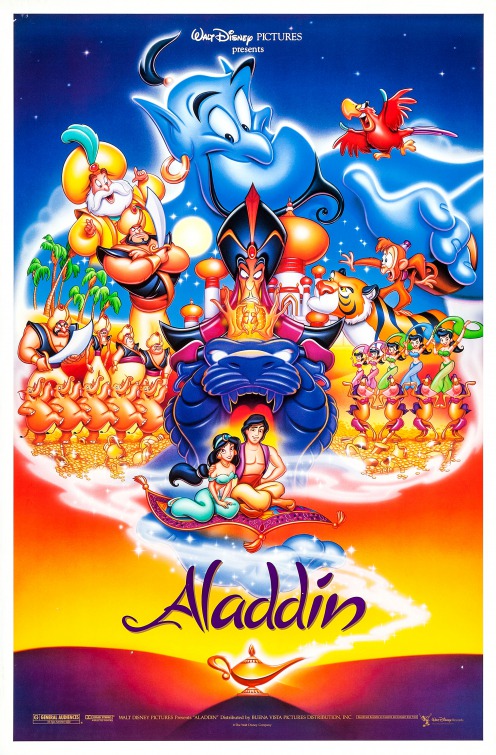 I can remember more clearly his work as the Genie in “Aladdin”. While not my favorite 90s Disney movie (that honor would go to “Beauty And The Beast”), I still thought it was good, and Williams was one of the big reasons why that was. Apparently, the character wasn’t originally going to be that big, but when Williams came on board, they gave him free reign because of his improv skills. I hope the complete outtakes of his recording sessions get released someday, if only because I want to hear the material that Disney executives considered funny, but not G-rated.

Yes, Williams could be a rather raunchy comedian, and nowhere was that more evident than in his stand-up comedy, where he had his first success. In 1997, I purchased his 1986 album “Live At The Met” on CD with a Media Play gift card I got for Christmas that year. Media Play was a massive store that had movies, music, books and video games. It was a chain that only lasted about a decade or so, but I loved visiting there. I purchased a lot of material from there, and “Live At The Met” was one of the things I purchased. 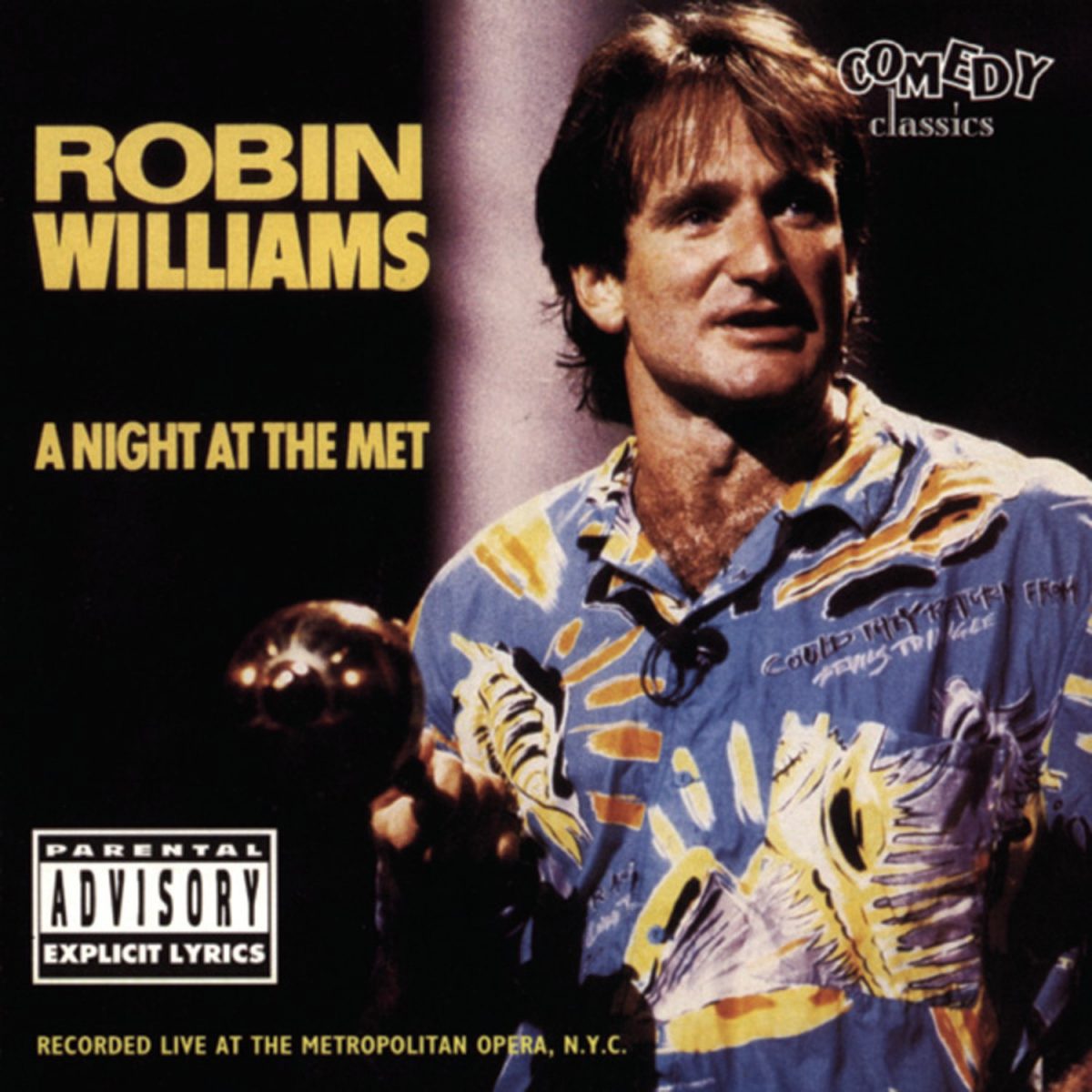 This was around the time that my 80s fandom was really starting to blossom, and Williams’ CD was one of the things that helped spur it on…This despite the fact that he seemed to have mixed feelings about the time. I laughed anyway, and since he spoke so fast, I would need to rely on friends to understand some of what he said. An older friend who would come over to hang out while my Mom went out dancing helped me understand some of the jokes I didn’t get. I particularly liked his routine about ballet. In one line, he referred to male ballet dancers as wearing “pants so tight, you can tell what religion they are”. I didn’t understand that line at the time I heard it (around 12 years old or so), but when I found out what circumcision was, the joke became funnier.

In the late 90s, I saw two more of his movies in theaters, “Patch Adams” and “What Dreams May Come”. Of the two, “What Dreams May Come” is undoubtedly the better movie. In it, Williams plays Chris Nielsen, a man who dies young. This is already harsher in hindsight, but it gets worse. He goes to a Heaven of his own creation. His wife Annie (Annabella Sciorra), distraught over his death, commits suicide and goes to Hell. That’s what I meant when I said it gets worse. Chris goes through Heaven and Hell to reunite with her. I hope that, whatever lays on the other side of this life, suicide victims don’t go to Hell. For all the good he did in his life, from charity work to USO tours, Williams deserves the best for his final reward. 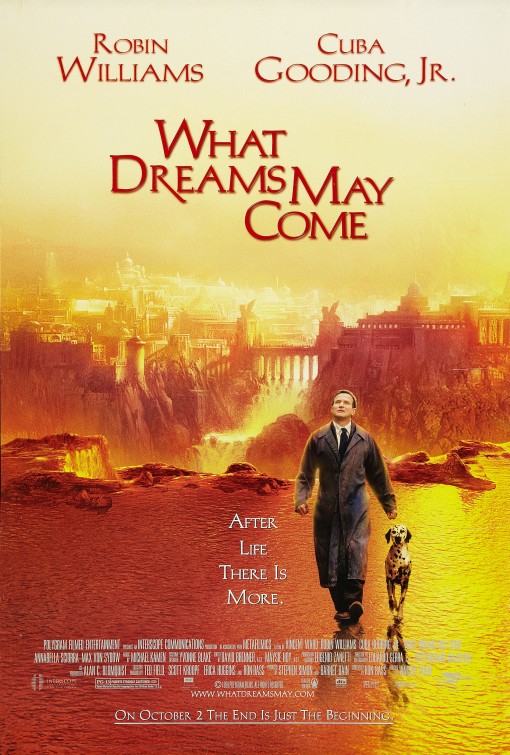 Moving into 2002, Turner Classic Movies had a theme month where they aired box office hits every week, titles ranging from the 1950s to the 1980s. I was naturally interested in the 80s evening, and that was when I first saw the movie “Good Morning, Vietnam”. This was Williams’ first big movie hit, and I thought it was very funny, but also sad at times. WIthout a doubt, the saddest part is Williams’ as Adrian Cronauer putting on Louis Armstrong’s “What A Wonderful World” to pay tribute to the soldiers he put on an impromptu performance for 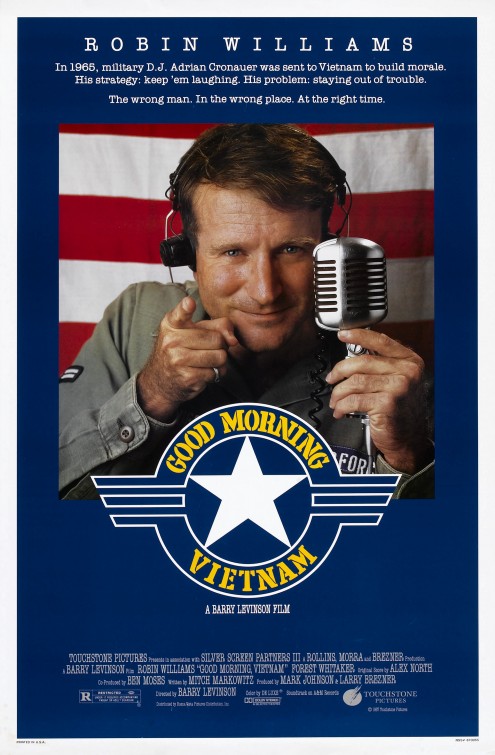 Hearing such a beautiful song set against scenes of destruction is quite a tearjerker, and is even more so. Yes, it’s anachronstic, since the song was released a year after the movie was set, but this was one of those times I didn’t mind the anachronism, because it worked.

The world is wonderful, and while Williams is no longer a part of it, we will have his movies, his TV shows and his stand-up comedy to remember him by.

Williams once said “You’re only given a little spark of madness. You mustn’t lose it”. I won’t, Mr. Williams.

Rest in peace, and carpe diem, both in this world and the next. 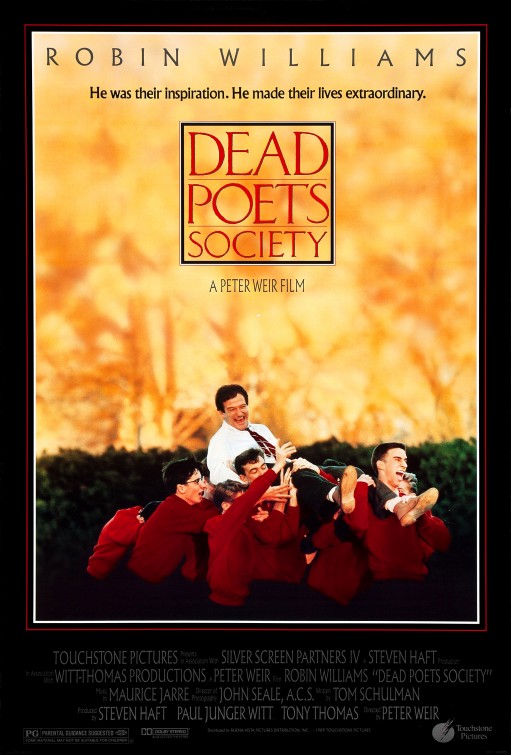