I was saddened to hear of the death of Eddie Van Halen on October 6th, 2020. Van Halen’s passing shook me because his work was a big influence on what my pop-cultural tastes would become. To honor Eddie’s memory, I would now like to talk about some of my favorite pieces of music involving his talents. Whether as a songwriter or a musician, Eddie Van Halen’s work will live on.

My first exposure to Eddie Van Halen’s work came when I saw the movie Spaceballs. The song “Good Enough”, which opened the first Sammy Hagar-era album, 5150, was heard in the diner scene near the end of the movie. I think the song captured the mood of what many diners are like. Whether it’s the food or the atmosphere, it may not necessarily be the best, but it is “good enough”.

The next time I heard Van Halen’s work came when I saw the video for “Right Now” on VH1 in the mid-90s. Coming from the album For Unlawful Carnal Knowledge, released in August of 1991, it was something of a final light of hopeful lyrics before Nirvana released Nevermind the following month, leading the nihilism of grunge to become the norm for rock music throughout the remainder of the 90s.

The lyrics of “Right Now” were about how you had to make a stand for something better in life if you wanted things to impove. I was having a lot of difficulty taking a stand in the 90s as I was getting conflicting advice from different people on how to handle dealing with bullies and the like. I was told by some people to ignore the problems and they would stop, while others told me to face them. I didn’t know what to do and I felt very confused, but I got good advice from “Right Now”, although it took a long time for the advice to get to heart.

In the late 90s, my 80s fandom was blossoming at high speed, and when I was searching for 80s music to listen to, I came across Van Halen’s album 1984. The song that really spoke to me from that album was “Jump”. With Eddie’s work on both guitar and synthesizer, the song, if you’ll pardon the obvious pun, jumped out at me as an example of why I would come to love the pop culture of the 80s. 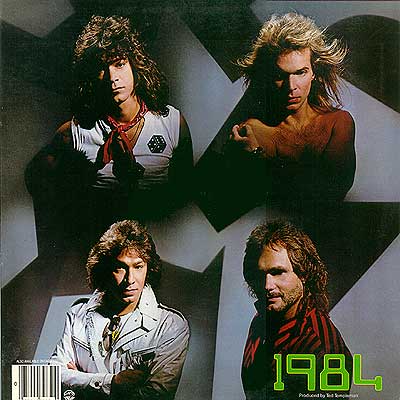 By this point in the 90s, the nihilism of grunge had made its’ way into the spirits of so many in my age bracket. That nihilism didn’t speak to me, though. When I heard “Jump”, it was like a message from a more positive, hopeful world than the one I was living in at the time. The idea of jumping into an exciting new life was a concept I was very eager to reach for. Unfortunately, I was still dealing with the full-bore sadness of a troubled school life and an even more troubled home life.

I wouldn’t really make the jump into a happier life until 2012. I turned 30 on December 22nd, 2012, and I made the decision on that day to approach life and the world in a more tolerant, open-minded, friendly and happy way. It was the best decision I ever made. Better times had finally arrived for me, and I’ve been making the most of them since 2012. “Jump” played a large part in that. I only wish we could’ve seen the version of the video that featured my friend and former interview subject, Becky LeBeau.

Returning to Van Halen, though, in addition to their great originals, Eddie Van Halen brought his guitar genius to several fantastic covers, one of which was a rendition of Linda Ronstadt’s “You’re No Good”. Eddie’s guitar work really highlighted the venom apparent in the lyrics. The instrumentation of Ronstadt’s version had a certain snooty quality to it that was appropriate for Linda’s vocals. By comparison, Van Halen’s guitar assault was more potent and pointed. Eddie Van Halen had the ability to take a great song and make it even greater with his musical skills.

Just as Eddie’s guitar work could bring out a song’s anger, it could bring out a song’s joy as well, best evidenced by Van Halen’s cover of Dancing In The Street. Listening to Van Halen’s version of the song, Eddie and the crew brought a sound that promised a great time with great friends. Although I don’t drive, listening to this cover finds me imagining cruising down the Sunset Strip, looking for a good time and finding it instantly as people are drawn by Eddie’s sound.

The music world lost a legend when it lost Eddie Van Halen, but I know that he’s rocking in a whole new dimension right now, and the music he made here on Earth will continue to rock and roll through the land.