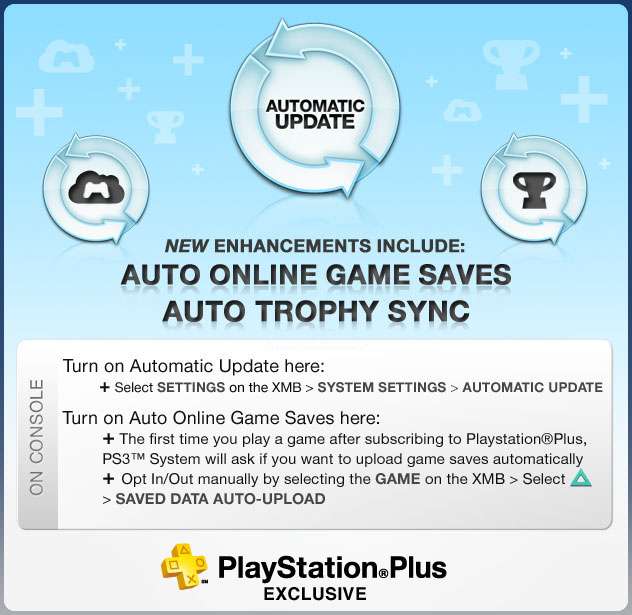 Sony has released new details on an upcoming Playstation Firmware Update. In this update you’ll find Auto Trophy syncing, which was a highly requested feature. Only downside is that you need PS+ to use it. Hit the jump or the full detail on Firmware 3.70

“Hi everyone! As we are continuously working toward providing the best gaming and entertainment experience on PlayStation 3, I wanted to give you all a heads up on the following new features and changes coming with the next system software update (v.3.70).”

To make things easier for PlayStation Plus subscribers, we’ve added the option to automate two existing features. The [Automatic Download] feature will now be called [Automatic Update] as a result of these new options.
A new auto upload function for online save data back-up will be added to make it easier to back-up your game save data. Under (Game), select the game for which you want to automatically upload saved data, and then press the Triangle button.
Also, Trophies will now sync automatically at the timing of Auto Download.

-You’ll be able to find and download all of the video applications available on PS3 directly from this new XMB category.
-A folder labeled “My Channels” within this category will allow you to easily access your downloaded applications.
-Any videos downloaded from the PlayStation store will continue to be placed in the existing Video category on the XMB

Two updates for all of you enjoying Blu-ray 3D movies on PS3:

-3D support will now be available when accessing Java-based special features on Blu-Ray
-DTS-HD MA, DTS-HD HR decoding/bit stream output (or lossless audio) will be supported while playing Blu-ray 3D movies.
-3D digital photos in MPO format can now be viewed in 3D on the XMB and in the Photo Gallery app.