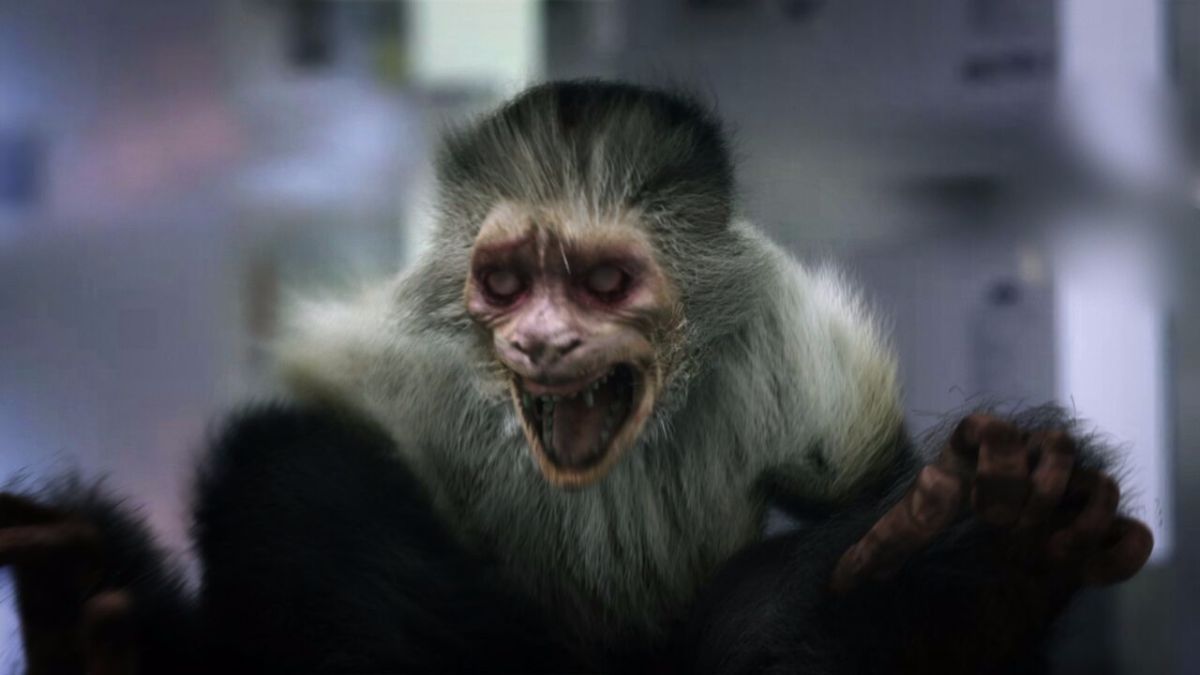 Johnny Caps here. I was recently asked to review the movie Zoombies, an Asylum release from 2016 which is screening tonight, October 19th, at Cinemark Theaters as part of their screening series of films from the studio, written about recently by our own Peter Paltridge. I’ve certainly heard of The Asylum’s work, and a lot of the word has been negative, but in my opinion, Zoombies works on its’ level, the level being that of a B-movie.

The movie is about Eden Wildlife Zoo, a wildlife park that’s home to many endangered species, including a large last-of-its’-kind gorilla named Kifo (Ivan Djurovic). It’s run by Dr. Ellen Rogers (Kim Nielsen), who takes care of her daughter Thea (LaLa Nestor) at the park. Several interns are working at the park prior to opening, including new security guard Lizzy (Ione Butler), yuppie-like Gage (Andrew Asper), troublemaker Amber (Brianna Joy Chomer), muscular primate worker A.J (Aaron Groben), and wacky-shirt-wearing fast talker Ricky (Isaac Anderson). A virus gets loose that starts with the zoo’s monkeys, and then spreads to all the other animals in the park. The animals become the titular Zoombies, and go on a rampage as, over the course of the movie, they kill almost everyone in the park. With the authorities being no help, it’s up to a small group of the zoo’s workers to defeat the menace before it goes global.

I could point out some flaws, like how the park is supposedly in the American South, but a helicopter saying “Ontario Police” can be seen, but when you’re watching a B-movie, you should expect flaws as part and parcel of such a project. The special effects may not be the best, as there is some very obvious CGI and blue-screening, but again, that’s one of the things that B-movies are known. I feel the plot of Zoombies is executed rather well, considering the circumstances.

We’ve all had encounters with rabid and feral animals, or at least read about those encounters, but this movie posits that there might be more to those animals than we initially thought. Of course, there’s no such thing as zombies in real life, but sometimes we find ourselves escaping into fantasy and horror in order to cope with how sad and unnerving reality itself can be. The actors in this movie do a great job of conveying fear of the Zoombies. I especially have to give credit to Ms. Nielsen, whose portrayal of Dr. Rogers hits all the right points for a movie like this. Her distress as the park slips out of her control is palpable, and in some scenes, you just want to hug her and offer her an ear for her problem.

Over the course of the movie, the Zoombies we see include monkeys, giraffes, koalas, lemurs, lions, birds and the aforementioned Kifo, who has a bond with Thea that gets put to a serious test. I would have loved to have seen more animals on the rampage in this movie, but The Asylum’s movies are not known for high budgets (the Sharknado series excepted). With what they have, though, the movie has some sufficient scares, and some predictable ones, too, including a sequel hook at the end. If there ever will be a sequel to Zoombies, I hope they really get into the concept more.

As is, though, it’s a fun time, and while there are some things to laugh at, the movie knows that and invites you to laugh with it. I think you will.

The Shivering Truth Serves Up A New Season Of Scares