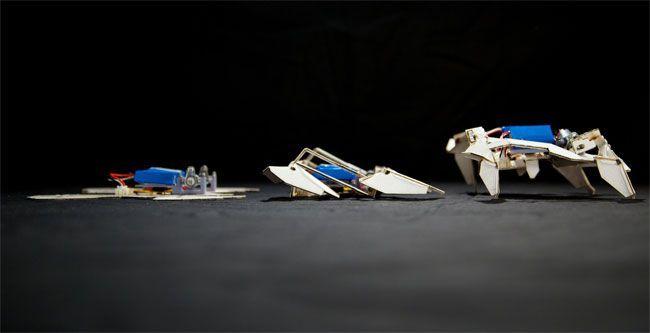 Scientists have created a new type of self-assembling robot that starts as a flat printed sheet and uses high-tech origami to fold itself into a functional, walking machine.

The robot includes two motors, two batteries, and a microcontroller to act as its brain, but its body is made paper sheet covered with polystyrene and a flexible circuit board. The circuit board contains hinges designed to bend the robot in a pre-planned way. The hinges have circuits in them that heat up when the microcontroller sends them power.

Although the paper-folding mechanism was inspired by origami, the concept behind the robot takes its cues from nature, attempting to match the self-assembly capabilities of the biological machines that are all around us.

Although the little robot now does nothing more than waddle away at about a tenth of a mile an hour, the scientists describe it as a “foundational step” that may one day lead to self-assembling robots that can be sent into harsh environments like space and activate, assemble, and carry out tasks on their own.

They also envision stores where people could go to get robots quickly printed to order to help with yard work or cleaning toilets or some other unpleasant task. The robot is very cheap to produce. The prototypes contained only about $100 in materials.

The team that worked on the creation of the robot included scientists from Harvard SEAS, the Wyss Institute, and the Massachusetts Institute of Technology (MIT).