Think about the most expensive video game cartridges out there. Stadium Events — because it was recalled. NWC World Championship Gold — because only 27 were handed out as contest prizes. Super Mario Bros? Not likely….”rarity” has to be a factor and that happens to be one of the most common video game carts on the planet, especially when paired with Duck Hunt.

Which is why the news that a copy of the NES game just sold for a hundred thousand dollars sounds like a joke at first. Or possibly some kind of eBay glitch? Yeah, it was boxed and mint, but who on Earth would pay that kind of cash for something like this, and why? 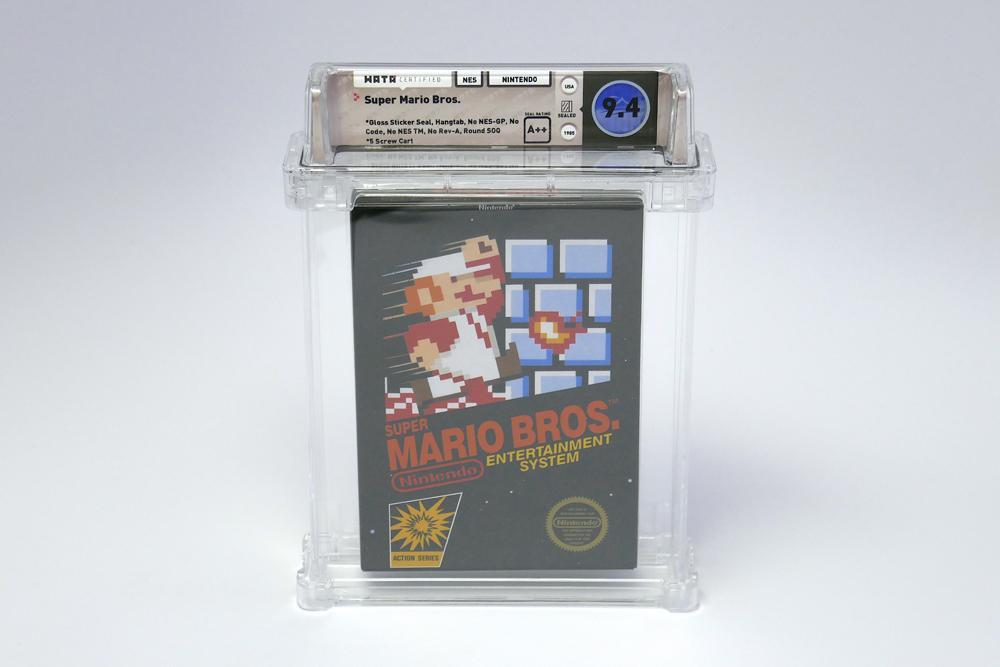 Here’s what’s actually going on: the Super Mario Bros cart was one of the original games being offered during the NES’s test market days, when it was only available in New York City and later LA. The NES didn’t go nationwide until the fall of ’86. But how do you tell if this copy is one of the originals?

It’s thanks to one little sticker. Nintendo shrinkwrapped all their games from 1986 onward. The test market carts were sold bare and free of plastic, the cardboard exposed to fingerprints and the elements. The only thing keeping the game sealed was a round sticker placed over the top flap, which had Nintendo’s logo printed across it. Due to the lack of protection, it’s very rare to come across an original Test Market NES game that has a pristine box, and ones with unbroken stickers are rarer still.

Combine that with the historical significance of Super Mario Bros. and you’ve got something that should be worth around five digits. That is precisely what carts like this have sold for in the past. But the seller of this one, who remains anonymous, was not willing to let it go for that price. He would accept no less than $100,000 for it, way above the typical auction value.

To get their hands on it, three collectors pooled their resources together: Jim Halperin, the founder and co-chairman of Heritage Auctions, game collector Rich Lecce, and video game store owner Zac Gieg. Only when they were able to produce the money did the anonymous man hand over the goods. Thus we have the highest-ever auction for a single game…and it’s Super Mario Bros.

The only one who doesn’t feel shocked is Deniz Khan, president of Wata Games — the company that authenticated and certified this item. “I’ve always said, video games are going to go the way of comics, or cars, or coins; it’s only a matter of time until a video game sells for a million dollars,” Khan says. In addition, he believes the most valuable old games will someday be titles like Mario, not obscure rarities like Stadium Events. We suppose, but first a heck of a lot of them have to get lost in natural disasters…