Nintendo still hasn’t forgotten about their Switch Online library of 8 and 16-bit games, though they’re going to run out of first-party entries before long. This afternoon a trailer went live that confirms we’re getting Donkey Kong Country 3 this month, along with a few other obscure choices.

DKC1 was added to NSO a few months ago, and it was really only a matter of time before the other two made their appearances. DKC3 is often cited as the weakest entry in the original trilogy, with its lazier vibe, duller music and experimental overworld that didn’t quite work out. Overall, though, it’s still solid.

As for third parties, we have some wild choices this time: THE IGNITION FACTOR, an overhead firefighting game. SUPER VALIS IV, a sword-slashing sidescroller with a female star (one of the few in the SNES era). The gritty point-and-click NIGHTSHADE, one of the most original and unique titles in the NES library. And as for TUFF E NUFF, all you need to know is that the box looks like this: 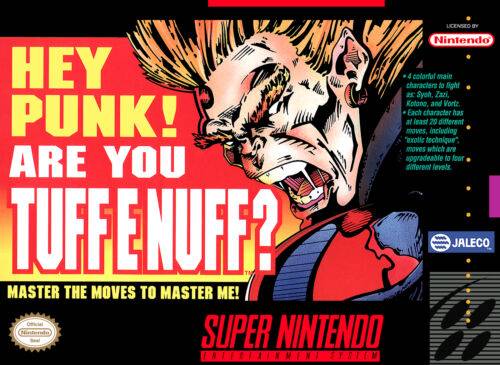 To those who respond with “WHERE’S MY FAVORITE GAME ALREADY”….it’s quite possible your favorite game is owned by a company that isn’t Nintendo, and that they would rather make money off reselling that game than give it away on the NSO service. It’s for this reason a Mega Man game will probably never appear there, nor will Street Fighter II in any form. Chrono Trigger….probably not, though if Square isn’t going to put it on the Switch themselves, we don’t see a problem.