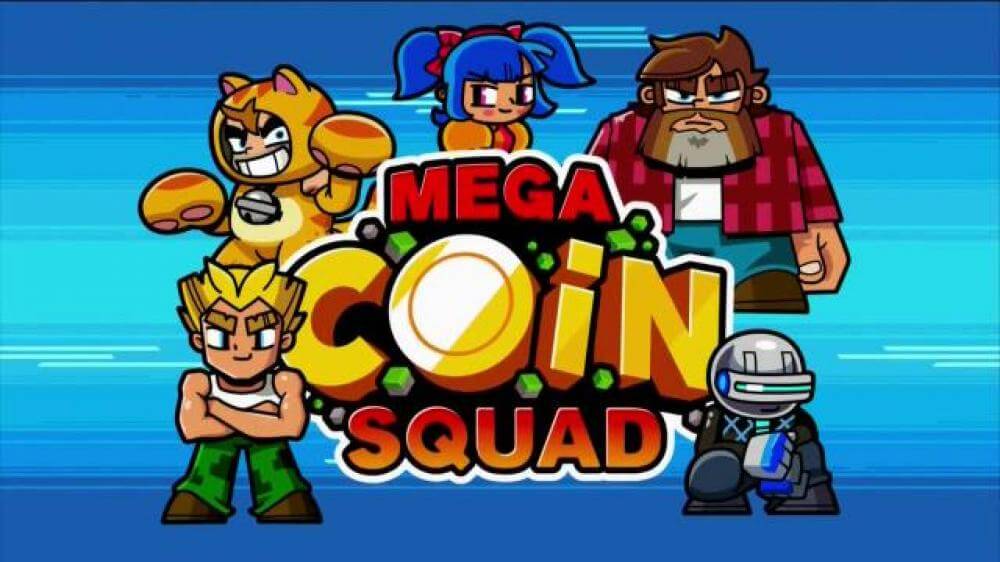 Video game characters seem to be either constantly in need of some cash or suffer with severe OCD. It’s the only way to explain why they are so often obsessed with collecting coins, rings and treasure when they are supposed to be recusing princesses or saving the world. Big Pixel Studios have taken a different approach with their game Mega Coin Squad by making the entire focus of the game the collection of coins to deposit in a piggy bank. Surprisingly, the game holds up incredibly well despite this very simple premise.

The game essentially revolves around travelling through an assortment of levels, avoiding enemies and collecting coins. However, some interesting gameplay mechanics make Mega Coin Squad a far more in-depth game than you might think. It follows the time honored tradition of being easy to pick up and play but fiendishly difficult to master. The single player experience introduces you to the five main characters and then chucks you into one of the four worlds to start your adventure.

Each of the characters has their own unique attributes and skills that make traversing the world a different experience depending on who you choose to play as. The basic concept remains the same throughout still, with compact levels featuring a variety of enemies and platforms that can fade in and out of existence making grabbing all those coins a tough job.

A similar mechanic to Sonic is also integral to the game. You only have three lives and any hit from an enemy will take away one of them. Yet, more important is the fact that a successful attack from an enemy will mean all of your collected coins will be lost and fly away from you. This gives the player a choice to make, do your bank the coins you have already collected to protect them or risk carrying on and losing them all? It’s a clever addition that inserts an element of strategy into the proceedings.

What is especially satisfying about Mega Coin Squad though is the way it rewards players. Collecting the designated number of coins will allow you to pass the level and receive one of the three gems available for each level. The other two gems are awarded for completing a section within a set period of time and banking every single coin in one go, objectives that can be pretty challenging. Things will never get too frustrating though as the developers have made it relatively easy to pass a level as collecting the necessary coins will rarely be too difficult. This means that while you are trying to unlock the extra gems on each level, you won’t ever get stuck for too long and can still progress. It also affords a nice way for the player the learn the game while still advancing, something other titles could learn from.

Speaking of gems, they offer a way for players to upgrade their abilities after each level. These random upgrade bonuses come in several different forms, some add extra seconds to your time limit, while others upgrade your weapons or provide special powers to make things a little easier. Whatever the case, these upgrades will soon become essential in later parts of the game as the difficulty ramps up significantly.

The campaign itself is relatively short, perhaps only an hour or two long for most players, but you are encouraged to play through it multiple times. Rewards are given for finishing the game with each of the characters, while collecting all of the gems is also something that is worthwhile. Ultimately though, Mega Coin Squad is a game designed to challenge the player to constantly try to beat their time. You’ll likely sink much more time into trying to work your way onto the leaderboard than on completing the campaign.

While the singleplayer campaign is all well and good, it is the multiplayer that really makes this game stand out. In it, for players can battle it out on the same console to collect the most coins. It forces players to think quickly as the action unfolds at lightning pace, as you look to hurl fireballs at the other players and doge their own attacks. There are four different game modes to play, from simply trying to get the most coins, to a capture the flag gametype that has only one large coin that must be taken back to your piggy bank. Gems are awarded to the best player every round, but with multiple rounds to every match the games never become too one-sided.

Looking past the gameplay, the visuals and sound are of a decent quality. Long gone are the days when independent developers would struggle to put out a game with strong graphics and effective sound effects, and Mega Coin Squad does not disappoint. The only real issue with performance comes in the most frantic action when the framerate can suffer a tiny bit.

The real complaint comes from the fact that the game has no online multiplayer component. Considering how strong and fun the local multiplayer is, the developers really have missed a trick here. We don’t know why online multiplayer wasn’t added, what is certain is that it definitely should have been.

Even with those issues, Mega Coin Squad is still a very good game.  Its ability to be both an accomplished competitive multiplayer action title and a rewarding single player experience make it one of the stand out releases on the Xbox One Store. If you liked fast paced platformers and strive to get the best possible times on every game you play or just want to beat your friends and have plenty of fun, then Mega Coin Squad could be exactly what you need.

Big Pixel Studios provided a copy of the game to the author for review purposes.