There are many familiar staples of gameplay we think of when we hear “RPG.” Menu-based battles. Exploration. Visiting towns, staying at inns, and gathering money. The new indie game Lucid Path, now available on Steam, breaks all those rules — and in the process, proves why we have them in the first place.

Upon loading the title screen you’re greeted with a pleasant medieval guitar riff. It’s a nice overworld tune. It’s also the only overworld tune. The dungeon, as well, uses just one looped music piece. It’s only when dramatic events happen that the music changes in any way. 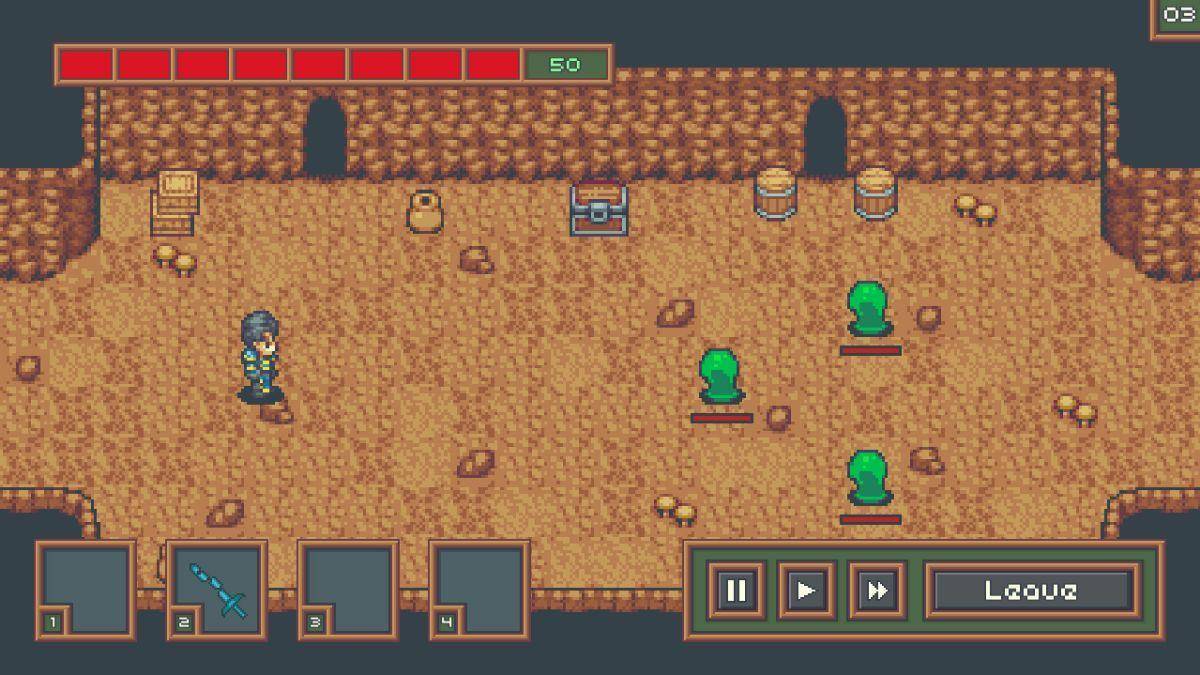 When you step into the dungeon, you’ll be in for a surprise — no, your keyboard isn’t broken, the character really is moving on his own. Your guy wanders through the area by himself, and engages in turn-based battles without your having to touch a single button. All you can do is watch him progress until all his hit points are gone, at which point he won’t faint, but simply turn around and head back.

Well, there IS one activity you can engage in as the player. You have four special moves you can assign on the inventory screen, represented by magic books. They all do things like lower the enemy defense, raise your attack power, etc. But they only last for one turn, and can’t be reused during that visit. This is as interactive as the dungeon scenes get. 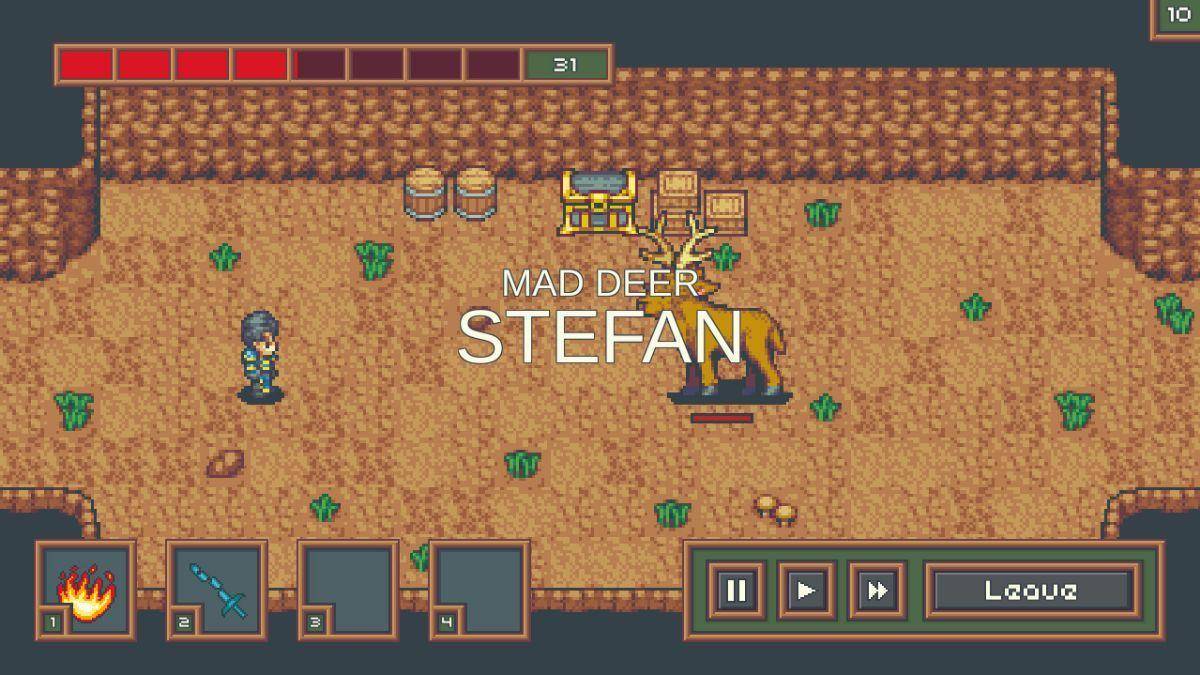 Each dungeon level is ten rooms long, with a boss at the end. If your meter runs out mid-level, you’ll only be allowed to return at the beginning or the middle (depending on how many rooms you cleared). Beating enemies often nets you treasure out of chests, but more often than not, they’re duplicates of what you already have (or already had before you got something better).

Odds are good you’ll see these items first at the store — one of three buildings clickable on the main screen. Spend your hard-won (or rather, hard-watched) money here to toughen up your character with better weapons and armor. There’s a castle where you divide up your experience points to increase your stats, and the third dwelling is where you perform your chores. 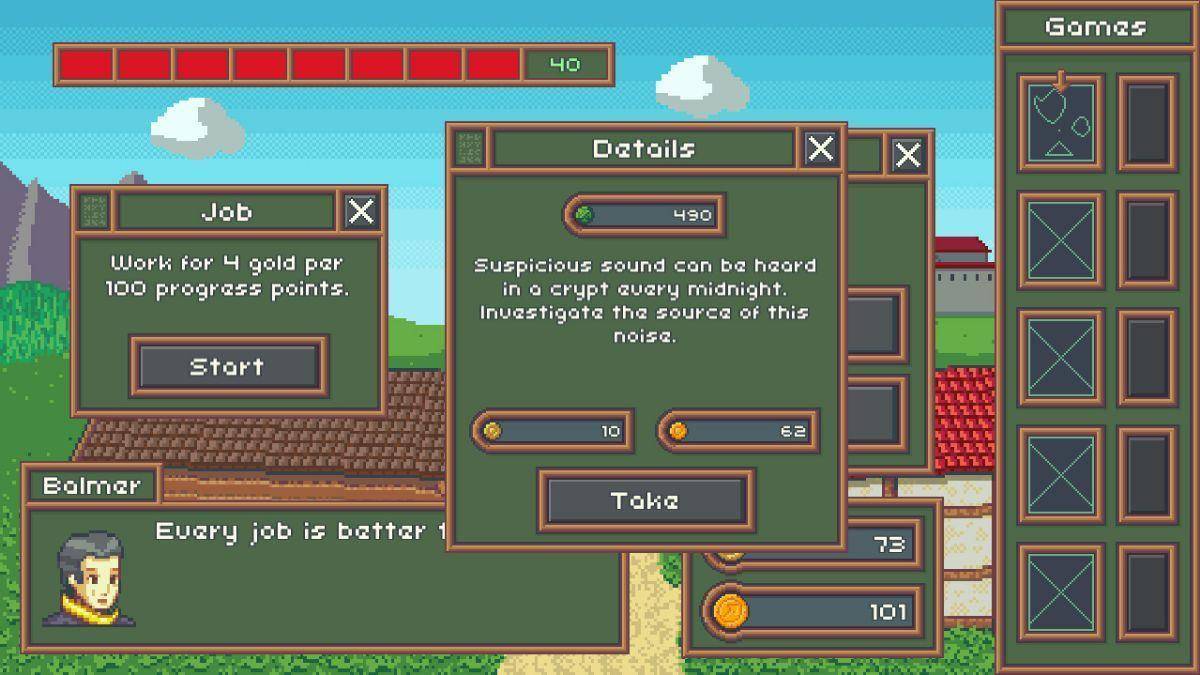 Chores are a significant part of the game. Between dungeon visits you spend your hours performing deeds for the townspeople… but you don’t get to actually do THIS part either. Instead, you play a series of minigames meant to represent the work your character is doing. The minigames don’t relate thematically to the tasks described — they’re separate concepts.

You might think you can cheat the system by grinding at the games until you’re impossibly strong, but it doesn’t work that way. You can play them as long as you want to earn MONEY, but only CHORES grant you the experience to level up your stats, and you’re only gifted three chores each time you come back from the dungeon. 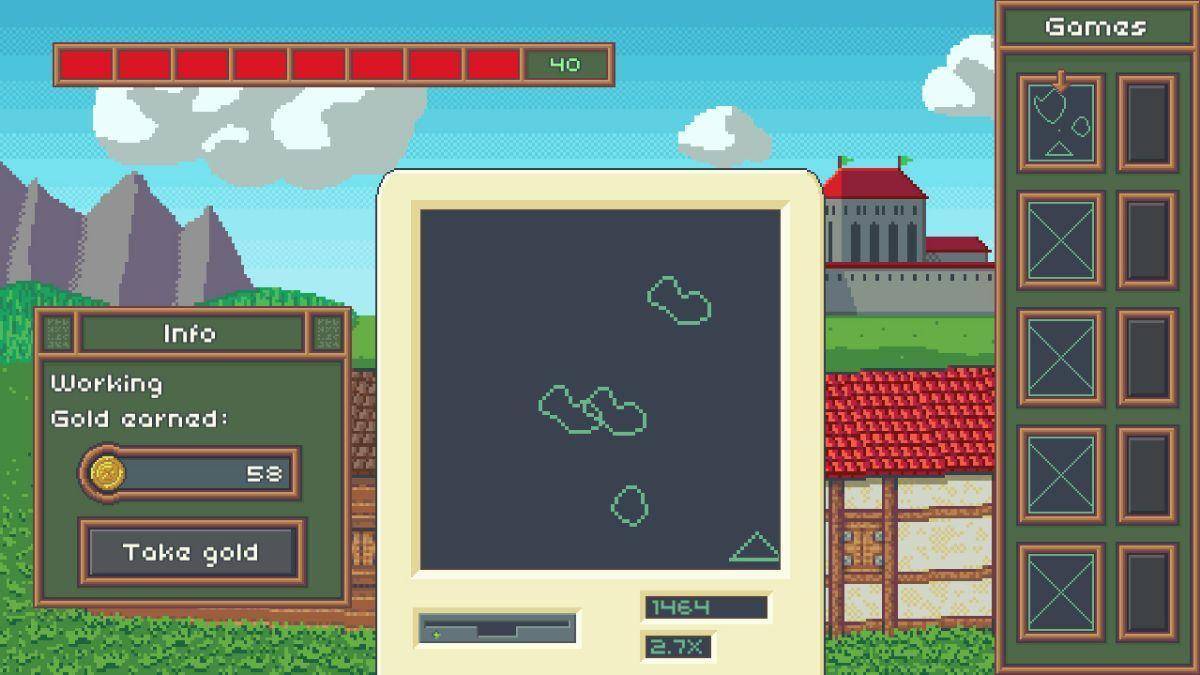 Since the minigames are half the gameplay, you’ll be playing them a lot… and this is a problem. They’re all primitive and basic, and none are truly interesting or addictive. They increase in speed every two seconds until you mess up, at which point they simply restart at the original speed with no penalty. There are five in all:

PLANETOIDS: Asteroid shapes fall toward you and you blast them into oblivion with X. You’re not graded for accuracy, so just move back and forth while mindlessly spraying bullets and you can’t lose.

WORMHOLE TRAVELER: An arrow automatically drifts down a twisty path and you must use the right and left arrow keys to prevent it from hitting a wall. Fairly simple to amass gold quickly, but very repetitive — there are only a few variants to the track and they endlessly repeat. None of the twists are difficult to get past except for one VERY sharp curve that will be the bane of your existence. You’ll know it when you see it.

ANCIENT WARRIOR: The crudest Robotron clone I’ve ever seen. The boxes that are supposed to represent robots just hang around the edges of the screen until they gradually approach you by random chance. The best strategy is to stand there and wait until they get close enough for you to smack. Repeat until dead. Kinda boring.

GUARDIAN OF THE PRINCESS: Protect a little stick figure girl by maneuvering a wall around her to block arrows. It’s the most amusing of the five, but it takes no time at all for the game to speed up past a natural human’s reaction time, so each game doesn’t last very long.

SPHERE OF HOPE: Bounce a ball with X to clear pillars that come at you. At first you’ll find this the most aggravating game of the five, as it’s dependent on timing more than any other. But after you get a sense for when to bounce the ball and how hard, you’ll be able to SMOKE this game and it’ll become your breadwinner gold-wise. It’s too bad it’s the last one you unlock.

You will only get one new minigame with every two dungeon levels. You’ll be playing a whole lot of Planetoids before you gain access to Wormhole Traveler, and likewise with that game before you see Ancient Warrior. None of the games are that special, but if you were granted access to all five from the beginning, there would at least be some variety. It only makes the repetitive nature of Lucid Path that much more monotonous. 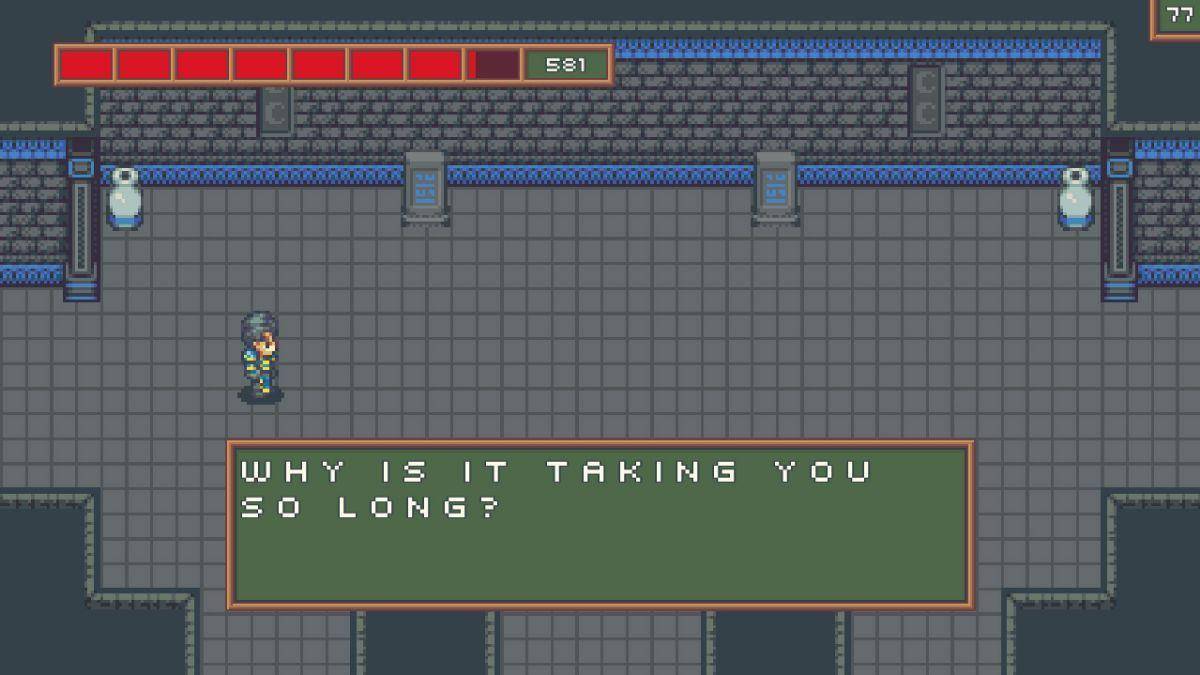 The game becomes this routine: Auto-walk through the dungeon until your meter runs out, mindlessly mash at the minigames until you’re healthy and rich again, visit the shop, level up your stats, back to the dungeon… It’s an endless circle, and you’re just along for the ride. After a few dozen rounds of this you’ll feel like the game is playing you, not the other way around. 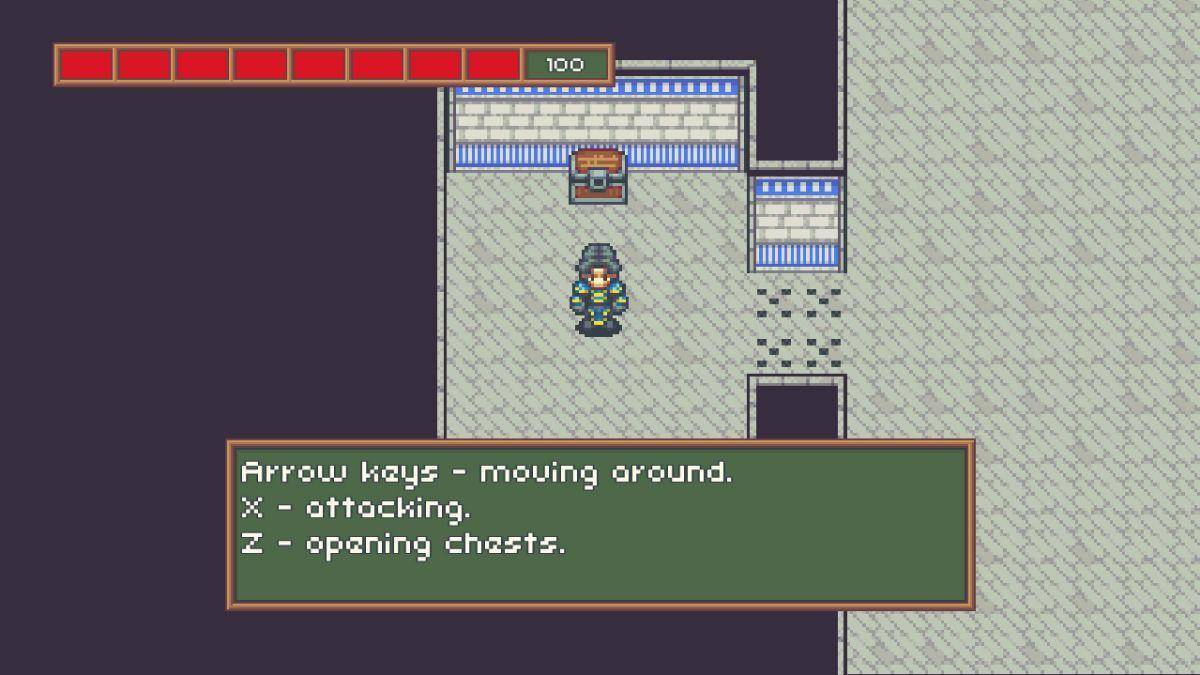 I was about to write this game off when a boss suddenly said “I want to battle you ONE ON ONE, kid!” and everything abruptly changed. I appeared in a different room, with a top-down perspective and freedom of movement. The monsters were now freely roaming about and I could strike then down with my sword Zelda-style. It was a massive improvement and it came out of nowhere.

After that happened, the game continued to mix things up. Auto-battles were sometimes interrupted by surprise plot elements… some of them humorous, others dark and disturbing. One boss was a cactus that said he wanted to hug me. and I killed him with one hit. The game finally had my attention, even though the repetition of the gameplay was still a problem. 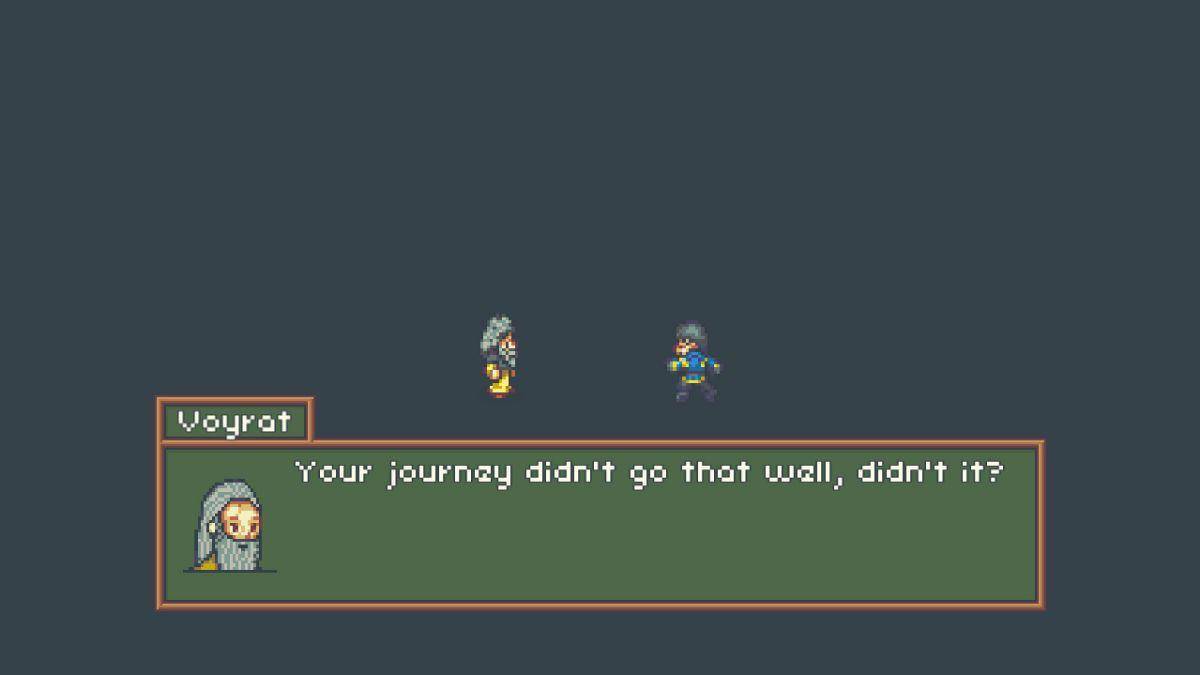 I wouldn’t have been so hard on Lucid Path if its first half was as engaging as its second. Despite the obvious flaws, I wanted to keep playing to the end just to see what crazy event was going to happen next. That was its saving grace and prevented it from a complete anti-recommendation.

Lucid Path could have been a great game if I was allowed to take control more often, like in most RPGs. Even if turn-based battles would have played out the same as the auto-battles in this game, it’s that tactile activity of picking from a menu and choosing your actions, then watching the results, that draws the player in. Watching a game play itself, or performing unrelated tasks where you don’t even see your character, works against the whole experience.

It didn’t have to be this way, and the second half of the game is proof of that. There is value in Lucid Path, you just have to last long enough to get to it.