This December, I’ll be turning 35. My date of birth was December 22nd, 1982, and I started becoming aware of my surroundings in 1987, around the time I was 4 and 1/2 years old. I had no idea at that young age that the pop culture of the decade I was born in would become a guiding force in my life, but as I grew and matured, the decade’s films taught me valuable lessons, some of which wouldn’t impact me until adulthood while others struck me immediately. I’d like to share some of those lessons and the films they came from.

As I mentioned to Sally Kellerman, Carroll Spinney and Eddie Deezen when I met them at Chiller Theatre in October 2014 (for Kellerman and Spinney) and October 2016 (for Deezen), respectively, the first movie that I can recall making an impact on me was Sesame Street Presents: Follow That Bird. 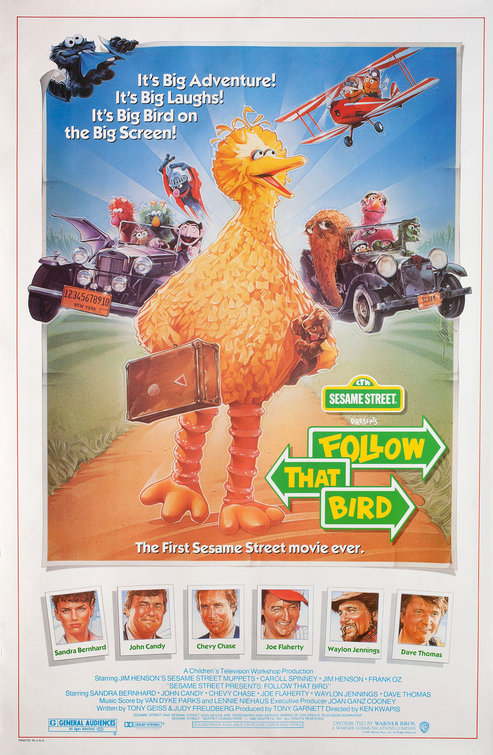 When I was young, and going well into my adulthood, I was a big fan of Sesame Street. As a kid, I loved the songs and suitable-for-kids excitement that was present in Follow That Bird. A viewing of the movie through mature eyes reminded me of something that has applied to my personal life, and that’s this lesson: Family is not always who is related to you. Family are the people who love and care for you. You may not be able to tell that lesson from this trailer, but it’s the movie’s moral, and one I’ve come to live by.

Before her death from Multiple Myeloma in 2010, my mother made plans for the end of her life and what would happen to me and my brother upon her passing. These plans, much to at least one of my relatives’ chagrin, did not include my aunts and uncles. While two of my uncles and one of my aunts understood where my mom was coming from and why she went outside of the family for help, one of my aunts did not. She was so upset at being left out of my mom’s plans that she ended up holding grudges against my mom’s friends, the people she turned to for help with her medical and financial matters, and referring to them as bitches. The truth is that, although my aunts and uncles will always be my blood family, I’ve come to find that mom’s friends have become like a second family to me. They’re more understanding of Asperger’s Syndrome than my blood family is. They understand my passions for pop culture and support them more than my blood family has. Finally, my mom’s friends have seen me get upset and torn up about things, and yet they haven’t abandoned me. They may have been upset with me briefly, but after I’ve calmed down and explained my actions, they’ve been more understanding.

What about my brother, though? I live with him, and although we love each other, we have disagreements about things both major (like upkeep of the house) and trivial, and that leads me to the next 80s movies I learned a lesson from. Those films are Ghostbusters and Ghostbusters II. The lesson I learned from these movies is that, just as I have the culture that provides me an oasis during rough times, so does my brother. 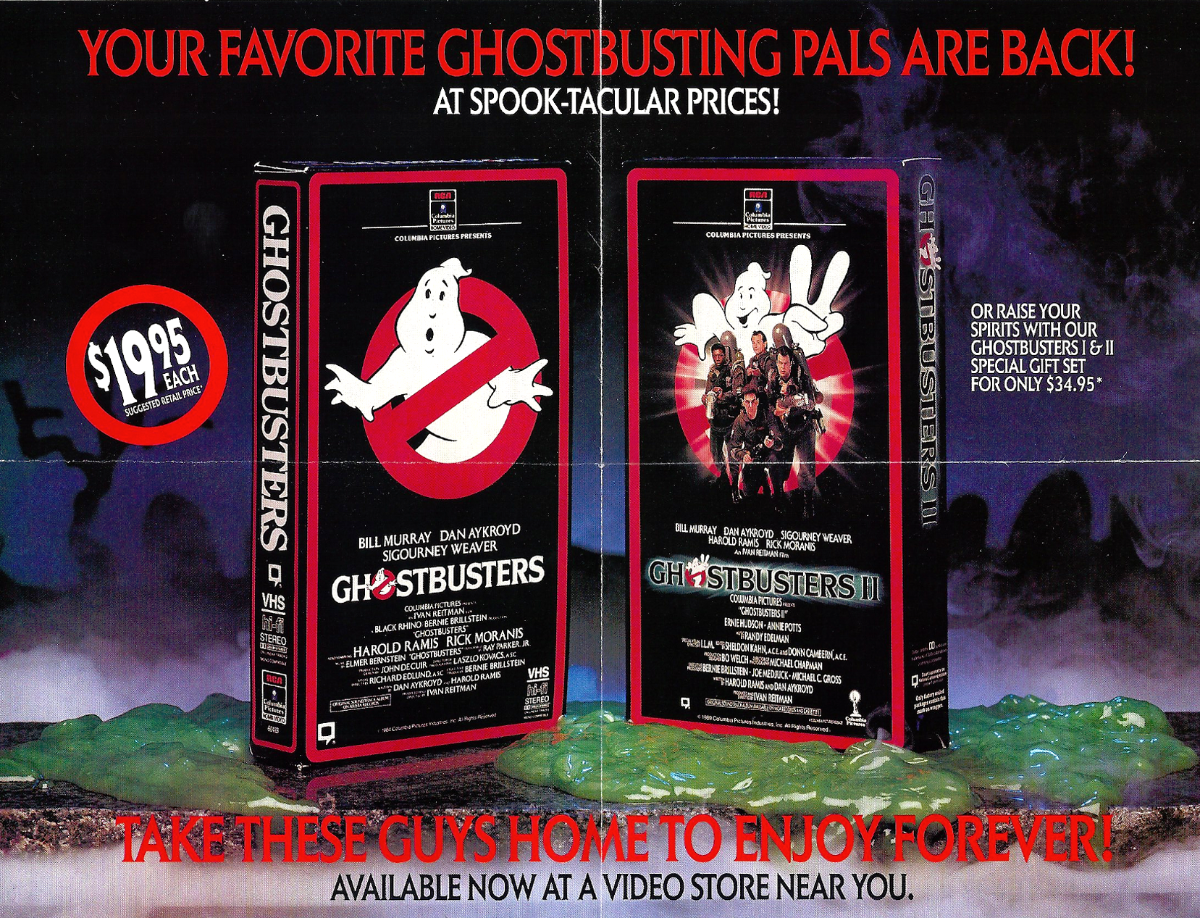 I’m probably one of the few people who will admit to liking the 2016 version of Ghostbusters. I’ve even gone as far as to say I loved Ghostbusters 2016 as much as the original and even more than Ghostbusters II, one of a select few 80s movies I must say I don’t like. I said as much to my brother, and he was rather distressed. Somewhere along the way, he explained to me that the Ghostbusters movies got him through some rough times as well. Everybody needs something to hold onto during the rough patches, and for my brother, the Ghostbusters movies were that thing. My mom would often imply that pop culture was just pop culture and not something serious, and that upset me, yet I found myself saying to my brother that Ghostbusters was just a movie. It wasn’t for him, though, and for many people, it’s more than that. It’s something that’s given them inspiration towards life, business and even charitable matters. Just think of all the charity fundraising groups themed to Ghostbusters with staff members in the team’s jumpsuits and tooling around in custom-made Ecto-1s to raise funds for things like the Make-A-Wish Foundation. That’s proof of how, for some people, a movie can be not just an entertainment, but a lodestar for how to live life.

On a different tack, I’ve often written about Disney’s The Little Mermaid. It’s a movie that continues to speak to me throughout the years. 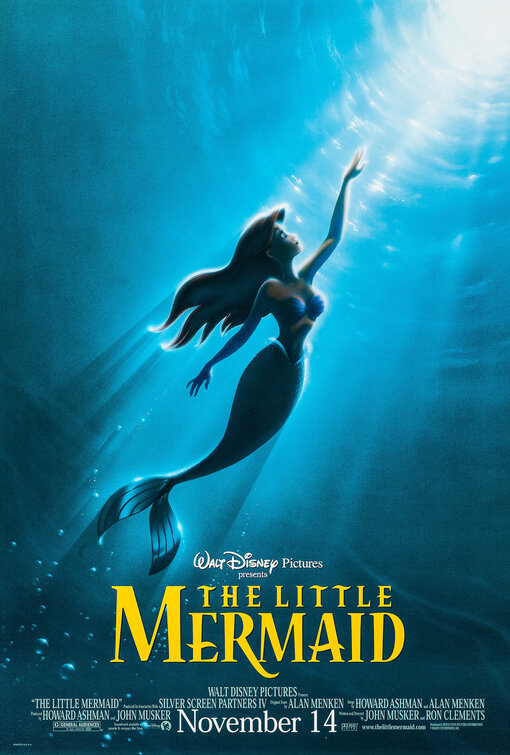 One of the lessons I learned from this movie is that you should make your interests work for you instead of against you. For Ariel (Jodi Benson), she was fascinated tremendously by human life as opposed to mermaid life. That fascination, inspired further by Prince Eric (Christopher Daniel Barnes), inspires her to fall in with Ursula (Pat Carroll), who takes Ariel’s interest in human life and uses it to her nefarious ends, and so Ariel has to make sure her interests don’t destroy those she loves.

Speaking for myself, when I was younger, I assumed that all people who were fans of the pop culture of the 80s held the same disdain for the 90s that I did. I would come to find, through posts I’m ashamed of from my younger days, that people liked both eras of pop culture, and for them, it was just something to have fun with and not take seriously. I took the pop culture of the 80s seriously because it was what I turned to in the 90s and 00s when my life was experiencing tremendous amounts of turbulence. Although there are things from the 90s I like, it’s not with the same passion that I have for the 80s. I was so determined to get people to celebrate the 80s and disdain the 90s that I ended up alienating many people who could’ve been friends. Whether it was because I wasn’t a moderator or because I was so blinded by my own bad experiences in the 90s, my passion was working against me.

It wasn’t until I started writing for RetroJunk that I was able to properly explain why the pop culture of the 80s was so important to me, and those writings allowed me to mature as a person. Basically, the emotional turmoil I encountered in the 90s, ranging from being bullied in school to losing my dad to a heart attack when I was 12 to landing in a mental hospital and getting diagnosed with Asperger’s Syndrome to multiple school transfers to the beginning of the decay of my relationship with my mom, caused me to hold much of 90s pop culture in disdain. The reason why is because that pop culture was enjoyed either by the kids who bullied me or the adults who didn’t understand my problems and gave me advice that was nonsensical or inapplicable to my life. Starting with RetroJunk in 2006, I had the ability to discuss my passion honestly, and I’ve continued to express that passion in the 3 1/2 years I’ve written for Pop Geeks so far. I hope to continue it for a long time.

Another movie I learned a lot from is Beverly Hills Cop. The lesson I learned from this movie, and one that wouldn’t truly hit me until I turned 30, was to be clever and keep your cool. The cleverness of Axel Foley (Eddie Murphy) was shown in his ability to use his voice and a quick flash of his badge in order to get into areas where he might not fit otherwise. The coolness of Foley came via his ability to rarely get angry. Granted, he did get upset when Victor Maitland’s (Steven Berkoff) thugs grabbed him and threw him through a window, but other than that, his only upsets came when he was acting. 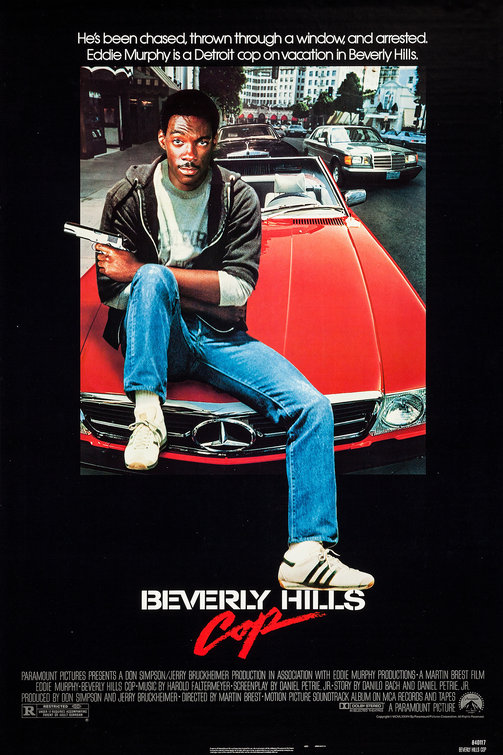 Speaking for myself, I did not have a cool temperament about me in my teens and 20s. I raged at everything and everyone, both trivial and serious. It took me a long time to save my anger for important things, but with the help of a therapist I’ve been seeing since 2011, and a psychiatrist who finally put me on the right mix of medications, I’ve gotten a lot better at remaining calm. I couldn’t have been a cashier (my paying job in 2010), but I can be one now. The cleverness aspect of it has come about with the conversations I’ve had with people. Conversations over the past 5 years or so, combined with therapy, have taught me how to use wit and intelligence to help myself out, as opposed to blunt anger and brute force, albeit brute force directed at myself after I upset others. I still think Axel Foley is one of the coolest characters ever in cinema. I only wish I had written him more like his film self in stories I wrote in my younger days, but that’s a tale for another day.

To wrap up this article, I would like to speak about Lethal Weapon.

What lesson did I learn from this movie that would apply to my older years? Put simply, life is worth living. Martin Riggs (Mel Gibson) is a tremendous risk-taker because of the death of his wife. He feels he has nothing to live for, so he constantly puts himself in danger in hopes that his life will end, either by his hand or a criminal’s. The case he and Roger Murtaugh (Danny Glover) are paired up on seems to change him somehow. In one conversation with Murtaugh, Riggs talks about saving a bullet to end it all. In the end, he gives that bullet to Murtaugh as a Christmas present as Roger’s family have accepted him as one of their own.

Being honest, there have been times in my life when I’ve been at a very low point and attempted suicide, whether by tightening a robe belt around my neck or trying to pierce my skin with pens and knives so I could bleed out. I never got very far with these attempts, but I did feel very low when contemplating these feelings. In the last year of my mom’s life, as she was dying from cancer, she heard me complaining about what was going on in my life, and she pulled a knife on me and screamed “DO YOU WANT TO KILL YOURSELF? PUT YOURSELF OUT OF YOUR MISERY BECAUSE YOU’RE MAKING ME MISERABLE”. She never apologized for that, and that incident confirmed for me that I didn’t want to die. I’ve made great efforts to improve myself over the past several years, and my life has greatly improved. I’m happy now, thanks to my network of friends and the therapy and medication discussed earlier, and I no longer have suicidal thoughts.

Put simply, movies can teach us a lot of things, and we can learn from our interpretations of movies. All these films I’ve discussed, in addition to being wonderful entertainments, have guided me towards living a better life, and I thank them for that.

Are there any movies you’ve learned lessons from, or interpreted to your advantage? Feel free to let me know, and I’ll talk to you soon.

For Those About To Roll, We Salute You! DM Tips: Putting Together a Campaign The Confession: New Clips Released for Suspense Thriller