Prepare to feel old: Joss Whedon’s Buffy the Vampire Slayer is about to turn 20. On March 10, 1997 a TV adaption of an obscure 1992 movie appeared on an upstart network barely anybody watched…and it grew to become one of the most popular and influential programs ever made. There was nothing like it at the time and the show set the blueprint for genre television as we know it today. Every single urban fantasy or superhero series produced since that time owes something to it (or borrows from it outright). Buffy Summers saved the world. A lot.

The show remains a part of pop culture to this day, and its reruns rival Star Trek’s in the timeless ability to attract new fans. Fox is aware of the debt they owe to the Slayer, and is gearing up to party. The first thing you need to do is….get out your crayons! This Friday a few advances pages from the Buffy Adult Coloring Book will be leaked on the BoxLunch & official Buffy Facebook pages. Color them in, reupload them using the hashtag #BuffySlays20, and send them to as many of the people involved as possible:

You don’t gain anything from this except a reason to bother Hannigan. If it’s prizes you’re after, the Sunnydale High Yearbook Contest will launch on March 10. Dare to tweet your own high school photo along with your favorite quote from the series and you could win a trip to San Diego Comic-Con. Details will be announced on BoxLunch.com.

Fox’s merchandising department sent us this list of anniversary products planned for this year. Buffy merchandise has never gone out of production, but it will be especially plentiful in 2017. 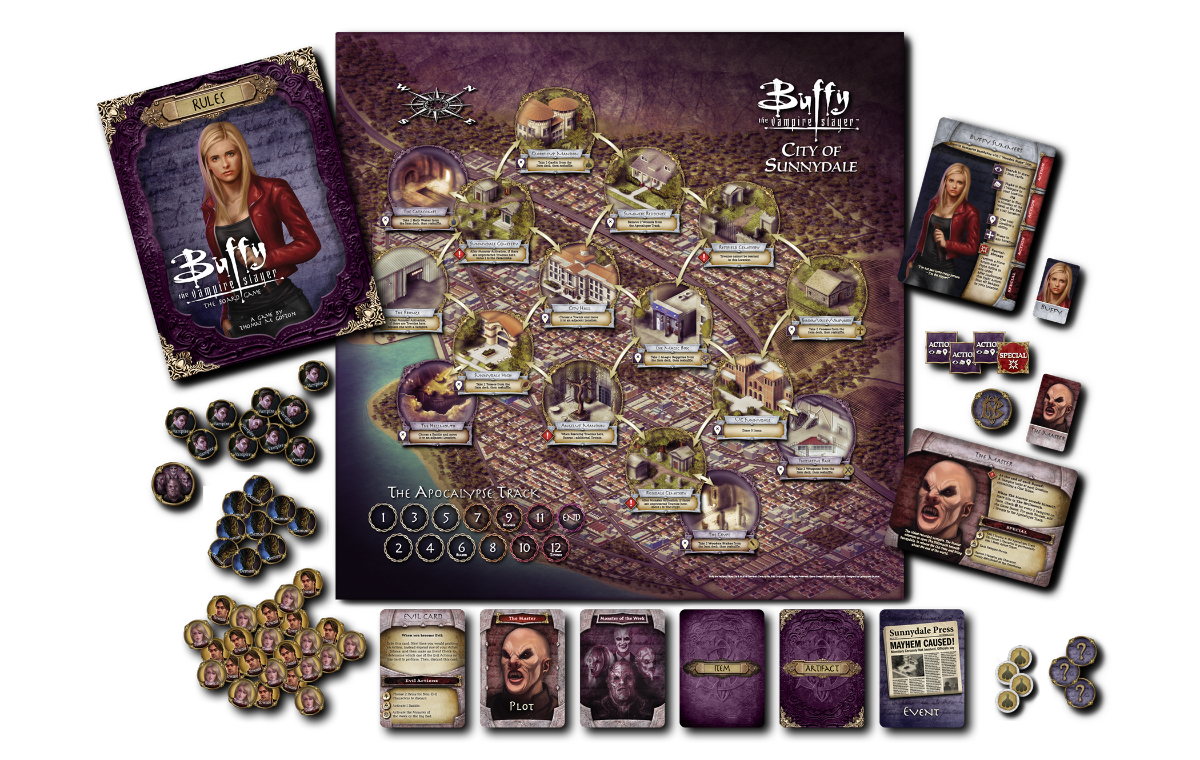 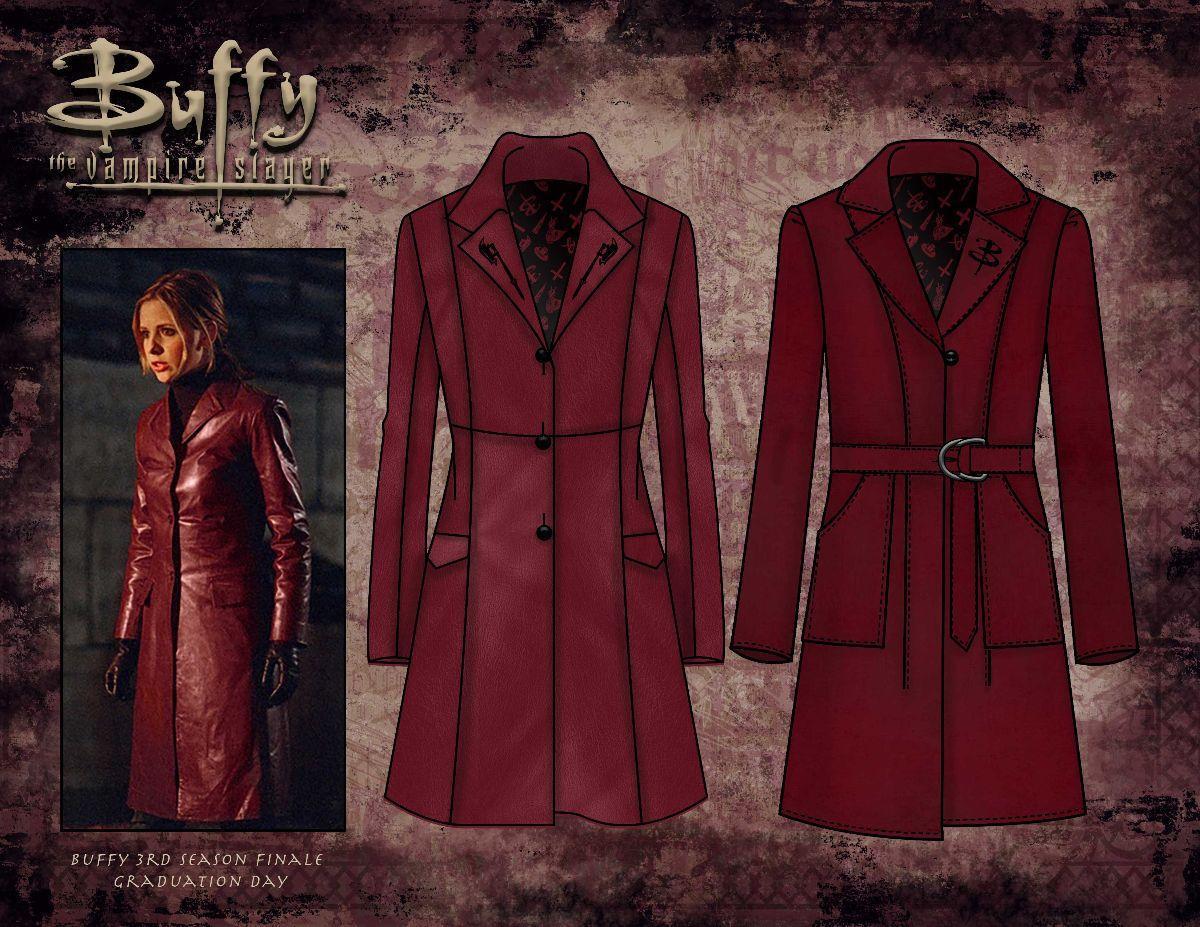 ·       Hot Topic, the retail destination for music and pop culture-inspired clothes and accessories, plus fashion apparel for girls and guys, is celebrating 20 years of slaying with AC/DC Apparel.  Together they are unveiling a unique fashion collection available exclusively on Hottopic.comthis summer.  The collection will celebrate the style of beloved Buffy characters, including Willow’s iconic 90s sweater, and a long trench coat inspired by Buffy Summers herself, as well as tops featuring iconic lines from the series.

(OUR COMMENTS: You knew Hot Topic had to be involved in this somewhere. But even they have never gone so far as to sell Buffy’s trenchcoat or Willow’s sweater. Why not her suspenders too?) 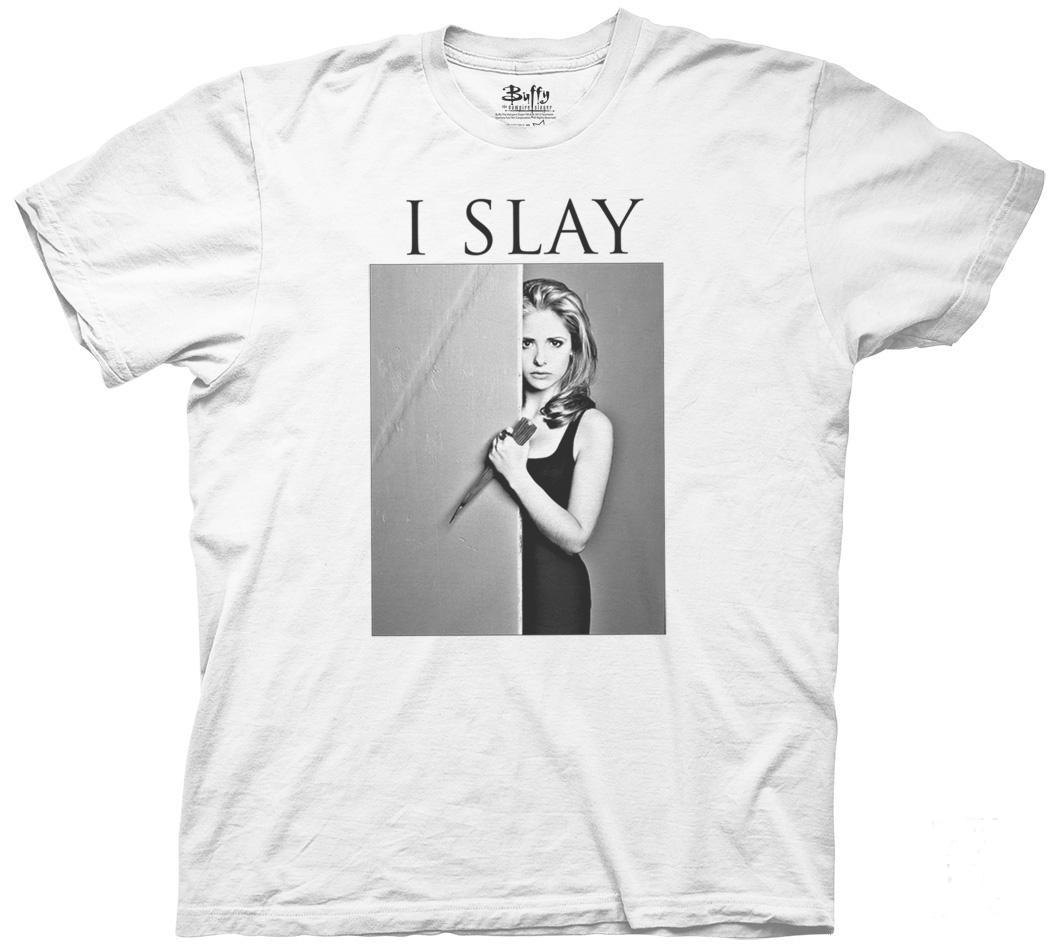 ·       The team of imaginative pop culture fanatics at Ripple Junction have locked themselves in the library and studied up on the last 20 years of fandom celebrating Buffy.  Ripple Junction has developed a full line of tees for young men and women available at major retail outlets, as well as ripplejunction.com and Amazon.com (Available Now). 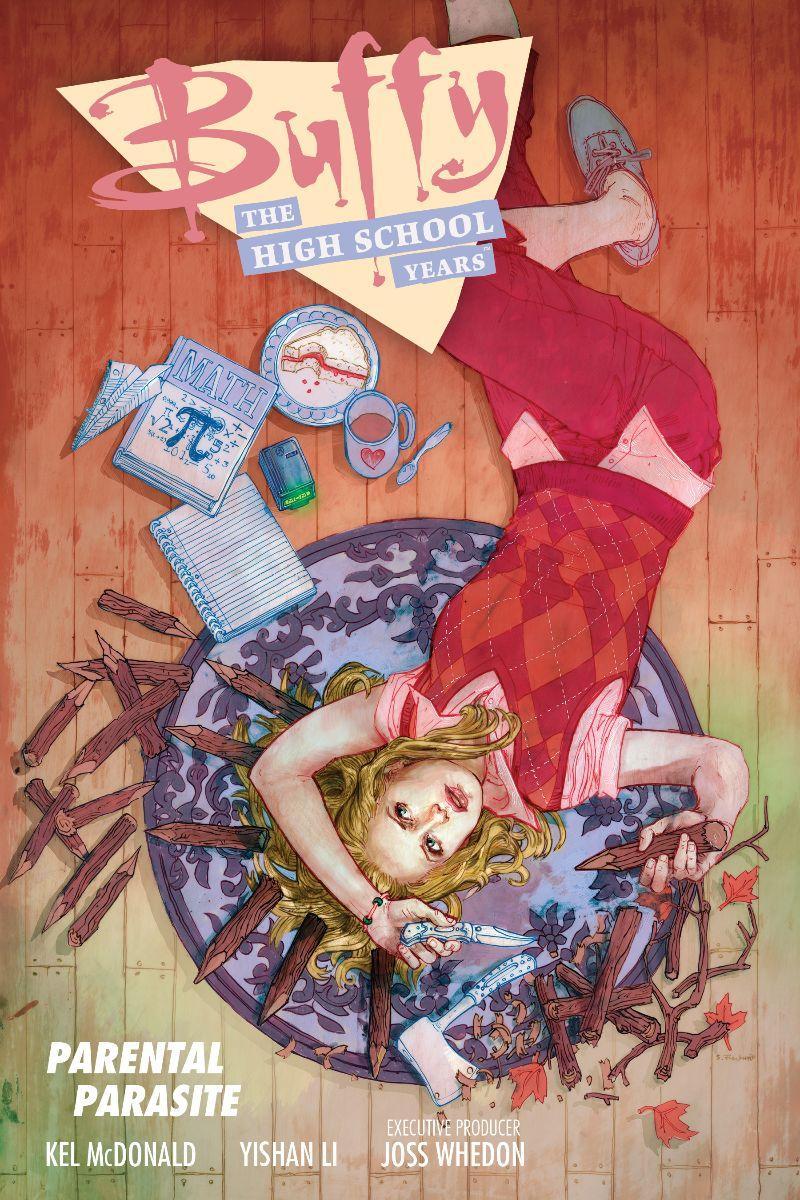 ·       Longtime publishing partners, Dark Horse and Simon & Schuster plan new books and comics that will release during the anniversary year, with highlights that include:

o   Buffy the Vampire Slayer Adult Coloring Book (Dark Horse/Available Now) – your favorite characters and moments from the Buffy television series are all represented in this engrossing adult coloring book.

(OUR COMMENTS: This is business as usual for Dark Horse, aside from the Watcher’s Guide. Buffy is not a stranger to comics.) 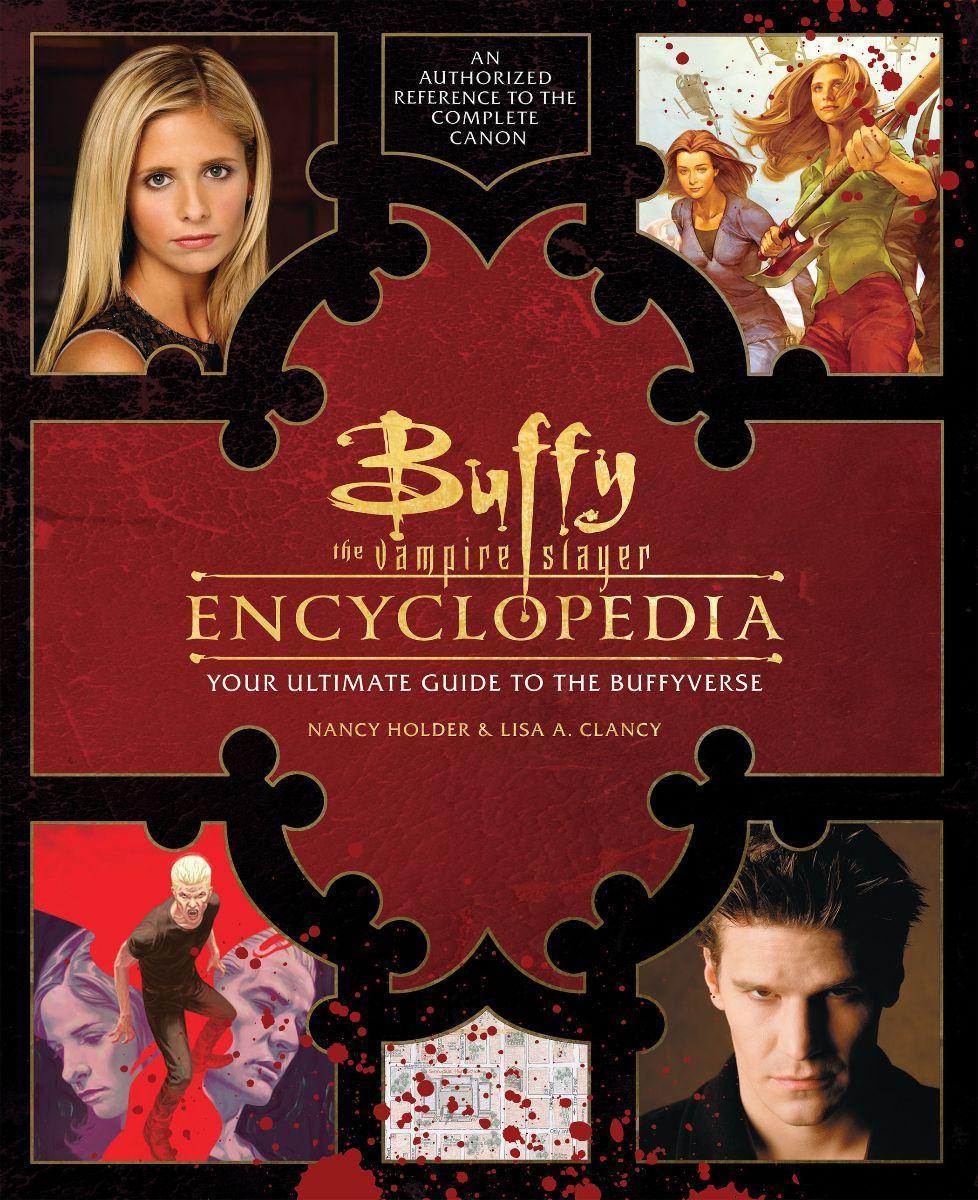 ·         Insight Editions and Harper Design will release several books and novelty items in celebration of the anniversary, including:

o   Buffy the Vampire Slayer Encyclopedia: The Ultimate Guide to the Buffyverse (Harper Design/September 2017) is a lavishly produced and written book by Buffy experts and is the authoritative source for fans, allowing them to indulge in the intricacies and nuances of the series as never before.  This authorized companion is a must-have for all Buffy enthusiasts as this full-color A-to-Z encyclopedia catalogs, explains, and cross-reference every detail of the Buffyverse, from characters, locations, and weapons to episodes, demons, and recurring gags.

o   Buffy the Vampire Slayer: The Official Grimoire (Insight Editions/October 2017) is the first and only truly comprehensive collection of every magical moment from all seven seasons of Buffy the Vampire Slayer, humorously narrated by beloved resident witch Willow Rosenberg. Completely illustrated and annotated by the rest of the gang, this book of spells isa unique keepsake for fans of the Buffy-verse and an incredible celebration of the show’s 20-year legacy.

o   Buffy the Vampire Slayer: The Definitive Visual Handbook (Insight Editions/October 2017) is a one-of-a-kind infographic guide to all things Buffy, blending striking illustrations with a bounty of facts and stats that shed light on just about every aspect of the show. Full of fun insights and surprising details about the lore, characters, quips, and most legendary episodes, battles, and villains, this refreshing take on the Buffy-verse will delight fans old and new.

o   Buffy the Vampire Slayer: Vampyr Hardcover Ruled Journal (Insight Editions/August 2017) includes a section of text adapted from the original Slayer Handbook before giving way to blank ruled pages. Atmospheric, engrossing, and designed with a dynamic in-universe aesthetic, this blank ruled journal invites readers to add their own story to the legacy of the Slayer.

There is even more than this, but you get the idea. The only thing you can’t buy is a Blu-Ray set with new special features. Go fig. (I’m sure most fans would trade 10,000 Willow sweaters for such a thing.)

It all begins March 10 with a special rebroadcast of the two-parter that launched Buffy’s TV career. Look for it at 9 PM on Pop (it used to be TV Guide Channel; look wherever that was.)

After a detour into superhero movies, some better than others, Joss Whedon

The Fantastic 4 had been out of MCU because of Fox. Fox

In the summer of 1991, Fox put out a rather misleading teaser

Dark Horse has worked with a lot of properties, and a lot