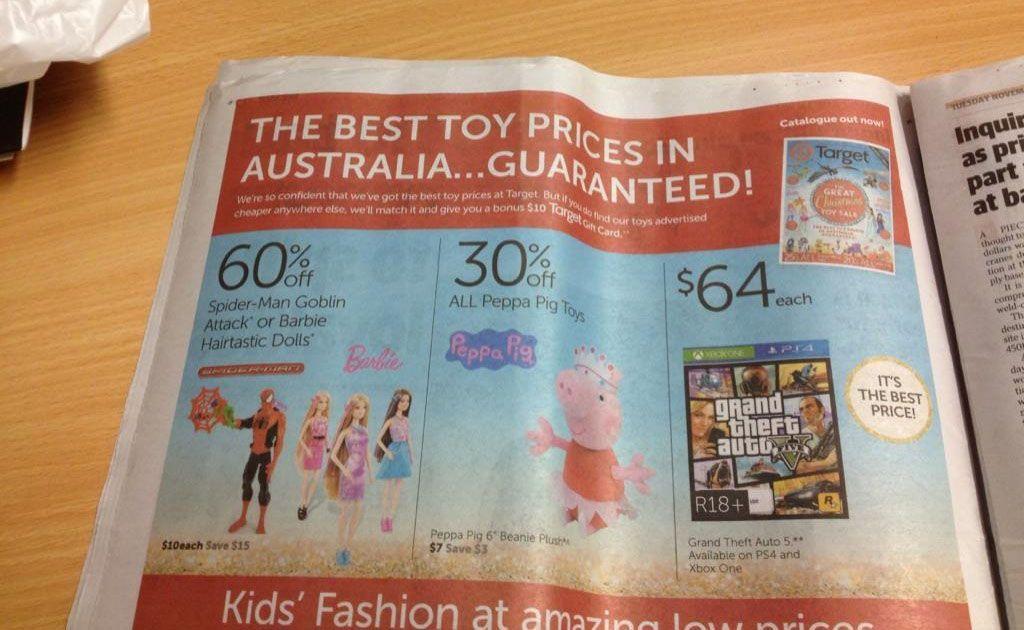 As of this week, the Australian versions of Target and K-Mart have pulled all copies of Grand Theft Auto V from their store shelves. Why would such a thing happen? Well, the image above might give you an idea. On the left is Barbie, in the middle is a pig plush and on the right is GTA V.

GTA, as usual, is an over-the-top satire of organized crime in a corrupt cityscape. This version includes the option to play as a crazy psychopath named Trevor and there is a scene that forces the player to torture someone. It’s been a while since I saw the belief that video games are only made for kids in action, but somewhere in the world, it reared its ugly head again.

So why can’t they just put the game on the shelves designated for adults, which every store seems to have a lot of? Welllll…..this particular movement makes it hard to sell the game anywhere. It started with a Change.org petition demanding that the game be banned from Target completely because it “encourages players to murder women for entertainment.” They go on; “The incentive is to commit sexual violence against women, then abuse or kill them to proceed or get ‘health’ points.”

The petitioners here are referring to the old belief about GTA being a “kill prostitutes for money” game, which goes all the way back to the release of GTA3 in 2001. In truth, while you can do this (and you shouldn’t, especially in real life), GTA does not discriminate as a murder simulator; all NPCs, cops and pedestrians are equally killable, male or female. The only act of discrimination in the gameplay is that you can’t target children (because there are none). Also, I thought the old “points” argument died with Jack Thompson (who’s not dead, just his career). Obtaining health or money in GTA is not the goal of the game. It being the sandbox genre, the goal is mainly to goof around.

While a lot of these erroneous beliefs have been dying down in America, as the audience for games continues to widen and the experience with adult-targeted games grows, it’s depressing to see them flourish somewhere else.

The Australian Target and K-Mart are separate entities from their American counterparts, and are owned by the same company down under.

What Are The Best Selling Games From 2015? Find Out Here!