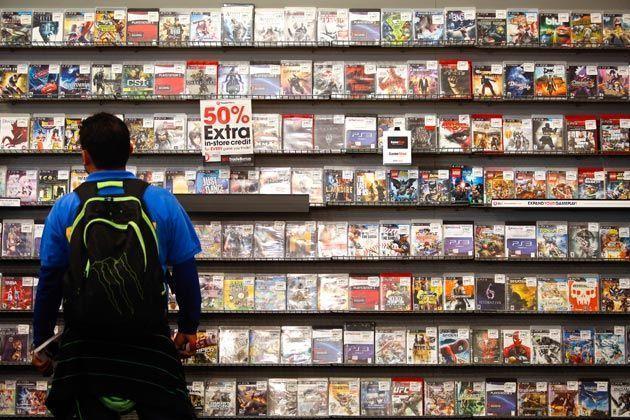 It’s accepted by most people that GameStop will someday, inevitably, face obsolescence and meet the same axe that beheaded Blockbuster and Tower Records. It won’t happen tomorrow, or next week, but it will take place at some point. Most people are okay with this. As attached as most gamers are to physical purchases, it’s very hard to feel any sympathy for a cold conglomerate that treats its workers horribly, shakes its customers for every penny, and cuts corners everywhere it can. GameStop isn’t blind to its own fate and has had various methods of dealing with it over the years. Those little pieces of paper you’re supposed to redeem for digital purchases are hilarious.

Yesterday GameStop announced its latest scheme to fight the future: CLOUD COMPUTING. This is a common buzzword used in marketing lately. A long-standing commercial tactic is to use smart-sounding terms that go above the customers’ heads: “4G LTE!” or “0% APR FINANCING!” instead of plain English. But cloud computing is somewhat easier to understand: instead of a device in your house doing all the work, a supercomputer in the distance makes all the calculations and beams it back to you instantly. The idea has great potential. Is it necessary for what GameStop wants to do with it? Not at all.

GameStop will be using the cloud for their in-store app and a personalized shopping cart — things they could have done with a website. In addition, GameStop’s cloud will be streaming game content and trailers to flatscreens on GameStop walls in 4K resolution. GameStop already has flatscreens in place, but if you think they’re going to take the extra expense of switching out all their TVs for 4K models, you don’t know them very well. In addition, even if they made the switch today, the majority of their TVs are too small for the resolution to make a difference.

In short, nothing will have changed at all. But maybe saying “CLOUD COMPUTING” a lot will ease investors’ nerves for another six months.