Ken Masters started as a Blonde Head-swap of Ryu in the first Street Fighter game, but as the series progresses, the two best friends go in different directions in life. Ryu became a world-traveling hermit who trains to be the best Martial Artist. He wanted to win tournaments, meet rivals that were beyond stronger than him and compete. While Ken is an heir to a million-dollar company, Without a doubt, He cannot live Ryu’s lifestyle even if he wanted to be the greatest fighter too. He is the Number one Martial Artist in America but has time for his business and family.
Ken Masters and Eliza, The happy times.
Fans of Street Fighter Grow up watching the love story of Ken and Eliza. When Ken defeated M.Bison in Street Fighter II, Eliza was the first person to show up and give him support. This romantic moment leads to their marriage. Previously before they got married, people saw their dynamic as a dating couple in Mangas...
Click to expand...

Ken, I heard Amber Heard is available. Maybe you should try dating her.

Wow, this is a Dark storyline, but you know what? This misfortune could be great for Ken's character development. He is living a picture-perfect life throughout all of his existence in Street Fighter while Cammy is dealing with PTSD, Chun-li is Mourning her father's death, Charlie is getting screwed all over again, and T. Hawk is fighting for the rights of his tribe. In contrast, the love of his life was a Brainwashed doll who lost her soul.

Strongest Woman in the World

I read a lot of claims about "character development," but Ken had already gone through it. He used to be a spoiled privileged child until his parents had had enough and had Gouken disciplined him and Ryu into warriors.

Martial arts, according to Ken, helps trainees become better individuals, not simply better combatants. Ken would have been just another money-grubbing businessman with a million safety nets to cushion any loss if he hadn't studied martial arts. He would never have met Eliza or grown into the joyful and kind companion he is now. I'm hoping for a reaffirmation or rediscovery of the discipline he learned as a student. I do not want him to relapse into Violent Ken.

I do not like this Divorced Ken Saga. Ken deserved better!

Characters with terrible stories like E.Honda, Ibuki,R. Mika and Deejay are the ones who needs character development.

This is terrible. Ken has been my primary character in numerous Street Fighter games. Surely Ryu would not abandon his rival and friend in such a manner? Man, I hope he has a redemption narrative, or else Ken will get violent in the future. Sigh. What are the writers thinking?

Ken's new look has some lovely details. Many fans were unaware that Ken is not naturally blonde. Because his mother is Japanese, he has either black or brown hair. Ken frequently dyes his hair blonde to make him appear less Japanese and more American. He's attempting to pass as white. Now he is depressed, as seen by the black roots in his hair. He no longer cares about dying, and his face is stubbled. His clothes become less showy and more washed-up dad-like.

Goku and Chi-Chi from Dragon Ball Z divorcing, I can understand because that is a verbally abusive loveless marriage. Goku don't even kiss Chi-Chi and they are married for like 25 years. Yet Goku and Chi-Chi are still together and they have grandchildren already.

Meanwhile, Eliza and Ken always have this perfect marriage with no flaws. All their moments together looks blissful. 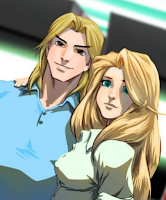 You guys got baited by this publicity stunt. Capcom made two happily married fictional characters divorce and now you are all talking. A marketing with zero effort because everyone are now talking. People are eve even taking this seriously. I guess it gave Geeks a sense of reality. Marriages fail and separations happen. Just because a couple looks happy it doesn't mean that's what happen in close doors.

Is Capcom going to play safe and have Ken and Eliza reconcile or are they going to a dark path and separate them for real. In Mortal Kombat X, Johnny Cage and Sonya Blade also divorced but they got back together thanks to their daughter.

If you guys play Ken's story mode in Street Fighter V, Eliza is annoyed that Ken gets involved in fights when he attends Karin's party. She also seemed jealous of Ryu. Capcom has been planting seeds of this marriage's crashing down. They are not as perfect a couple as people had seen them to be.

Whatever Ken's troubles are in his future storyline, I can see Ryu stepping in and giving his friend the push he needs to get back up, just like when Ken pushed him out of his rut all those years ago, as evidenced by his red headband.

So this is the reason why I saw people posting " She took the kids Ryu" comments on Social medias everywhere.

Poor Ken, He let himself go. How the heck Ryu is able to travel around the world when he is just a hobo that walks. Does he even shower?

Boss of All Bosses

I never mained Ken, My Mains in Street Fighter V are Karin and Charlie but Ken is so alone right now. So I will main him out of pity.

He is BroKEN... Get it? BroKEN! sorry for my corny joke.

Meme of the year! I can't get enough of the divorced Ken memes. They are dark and depressing but for some unknown reason they are hilarious too. The Meme made Ken more popular than Ryu and Chun-li at this moment.

Terry Bogard better be a Guest character, So He can ask Ken if he is okay.

This is why I never risked my cash on NFTs and Crypto.