The CW has given us our first look at Jefferson Pierce, AKA their next superhero Black Lightning, in full costume. Unlike the other tights-wearing vigilantes he shares a network with, BL is a retired superhero who’s been around that block already. According to the press release, “He made his choice: He hung up the suit and his secret identity years ago, but with a daughter hellbent on justice and a star student being recruited by a local gang, he’ll be pulled back into the fight as the wanted vigilante and DC legend Black Lightning.” 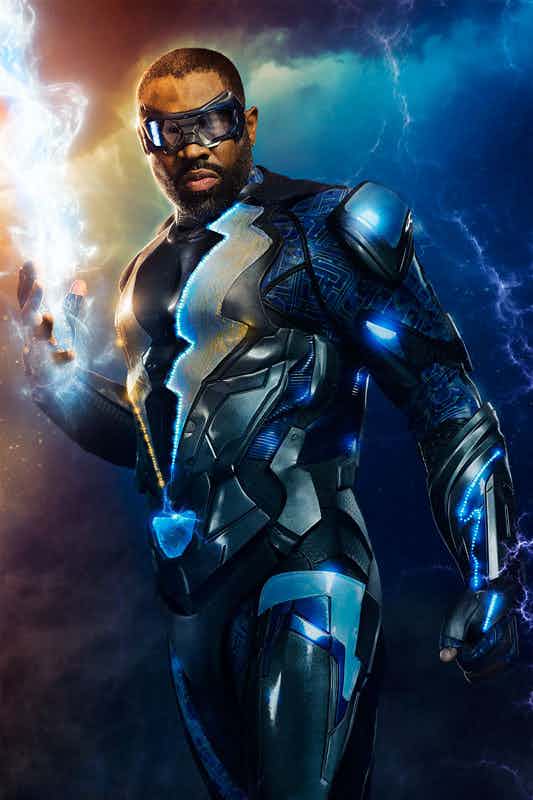 Pierce (Cress Williams) is backed up by his daughters Jennifer and Anissa (who become the heroes Lightning and Thunder) and his ex-wife Lynn (Christine Adams).

Ordinarily I’d be intrigued by this, but it happens to be a Berlanti Superhero Show on a network crammed with four already. And under such saturation, Berlanti’s tropes are becoming obvious. Will the series start out with the words “I am Jefferson Pierce”? Will there be lots of shadows? Will there be a bland, chemistry-less love interest shoved down our throats? Will it have a great first season, then gradually drag itself down?

The good news is, it says “Berlanti” on the tin but a different guy is in charge. Mainly Black Lightning will come from the mind of Salim Akil, who serves as executive producer, writer and director. “I knew way too much about the world as a young boy growing up in Richmond, California,” says Salim. “I was no stranger to violence, death, hopelessness or the feeling that no one cared about what was happening in my life. Comics were a great way for me to escape.

“I was about 13 when Black Lightning was created, and finally there was a Black Super Hero that gave a damn about our neighborhood and our lives. Resurrecting him at a time in our society when a sense of hope is lacking…Black Lightning will be that hope. And in updating the suit, it will signal to a new generation that it’s time to harness and release our power, and become our own Super Heroes.”

Black Lightning is currently under production and has no revealed place on the CW schedule as of yet.

You won’t have to wait much longer for the third season of HBO Max’s Titans…the superhero drama has been announced to be returning August 12, with new episodes appearing weekly on the streamer until October 21. And with that announcement comes this new trailer… The problem with reporting on Titans