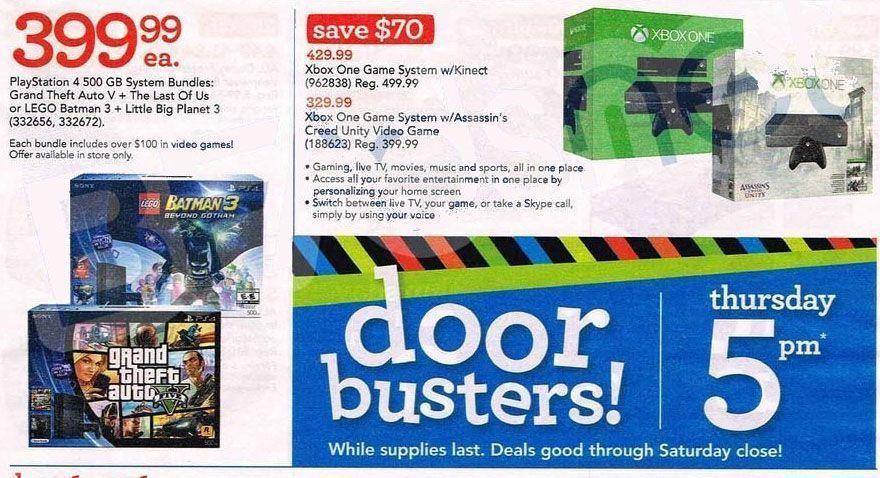 If you own a suit of armor, have a black belt in martial arts, or just don’t care about desecrating a sacred American tradition with pure greed, the barbaric annual event known as Black Friday may be for you. Advertisements and circulars from all the major big boxes are just beginning to be purposely leaked, and here are a few of today’s newly-announced deals you can look forward to seeing in the video game department…..

Toys R Us has revealed a gagglesworth of new post-Thanksgiving deals in their leaked flyer. C’mon, let’s play!

All video games in the clearance section (which Toys R us calls “SUPERBUY”): Buy one, get one for just $2

50% off Super Mario Chess board

Sears does not have very many game deals, or much of anything else for that matter…..or very many customers. But you will be able to find this:

That’s it. That was seriously the only game system for sale in 60 pages of tires and blouses. But it’s lower than Toys R Us, and you’ll be the only one there!

We are still waiting for GameStop to reveal their Black Friday deals, but here are a few revelations for their holiday season in general:

XBox One with Call of Duty: Advanced Warfare for $449

Call of Duty game bundle for $31

Preowned 32GB Nintendo Wii U with three games for $289.99 (this is a savings of ten dollars…really, guys?)

Rumor has it GameStop will not be showing their cards until a day or so before Thanksgiving. Keep an eye out for our update whenever they do.