I will say one thing about Cuphead — it is incredibly easy. In fact it must be the easiest game ever made. I beat the first twelve bosses blindfolded, operating the controller with my feet while on Ambien. My cat beat the next five. There are games starring Elmo that are harder than this, especially Letter Adventure. Of course you don’t believe a word of that…Cuphead kicked my butt too. it is exactly as thumb-punishing as everybody says it is, but that’s not a bad thing.

Ever since video game technology became visually sophisticated enough to support the idea, mankind has tried to invent a truly interactive cartoon. From Dragon’s Lair back in 1983 to Aladdin and Earthworm Jim on the Genesis, there have been repeated attempts to make animation you can control, but something always gives away visually that it’s a game. Miyamoto himself took a stab at it with The Legend of Zelda: The Wind Waker, and though the game still looks great today, no one would be fooled into thinking they were watching ink and paint on cels. 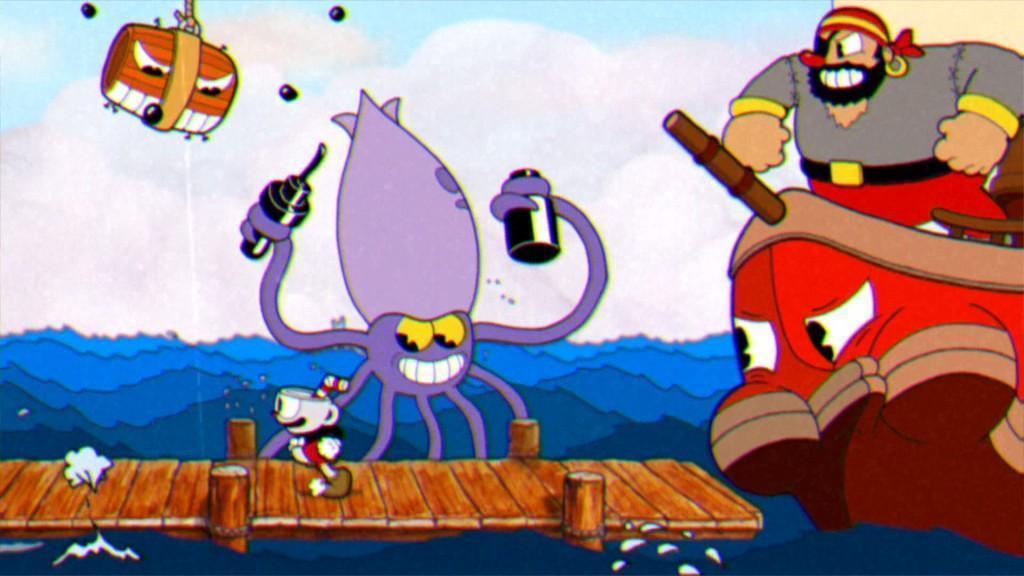 Today the barrier has fallen. Cuphead looks and moves exactly like a cartoon, and not just any cartoon. They picked a style of animation no one’s really tried to game-ify before (with rare exception). Studio MHDR managed to emulate the 1930’s era of animation flawlessly: the swaying bodies, the anthropomorphic objects, the watercolor backgrounds, the pie-shaped eyeballs, the creepy faces of the villains, the fact that the bad guy is literally the Devil…all these things were emblematic of theatrical shorts during the early days of color film. Even the sound is incredibly faithful, rendered in big band jazz. It’s like nothing anyone’s ever played before.

Cuphead and his buddy Mugman were skipping through the Technicolor woods when they happened upon a sinister casino. Being golly-shucks-naive, Cuphead walked right in and started throwing dice. Something about it really didn’t feel right to Mugman, who pleaded for Cuphead to stop. But before his warning could be heeded, the entire operation was revealed to be a ruse by the Devil himself, who now held ownership of the cups’ souls….UNLESS they were willing to do a job for him. Or two jobs, or twelve or twenty.

Cuphead and Mugman have to round up all the rotten souls in the area that have escaped the Devil’s grasp, but it won’t be easy (that’s an understatement). They’ll throw everything in the book at you, including the literal kitchen sink because that joke was fresh back then.

The majority of the game consists of these boss fights, scattered around four overworld maps. Each battle has a “simple” or a “normal” setting before you start it; “Simple” is two rounds and “Normal” is three. Several matches are open to you right from the beginning, and beating one of them opens up several more no matter what difficulty level you used. The match is only truly “won,” however, if you beat it at Normal or above. 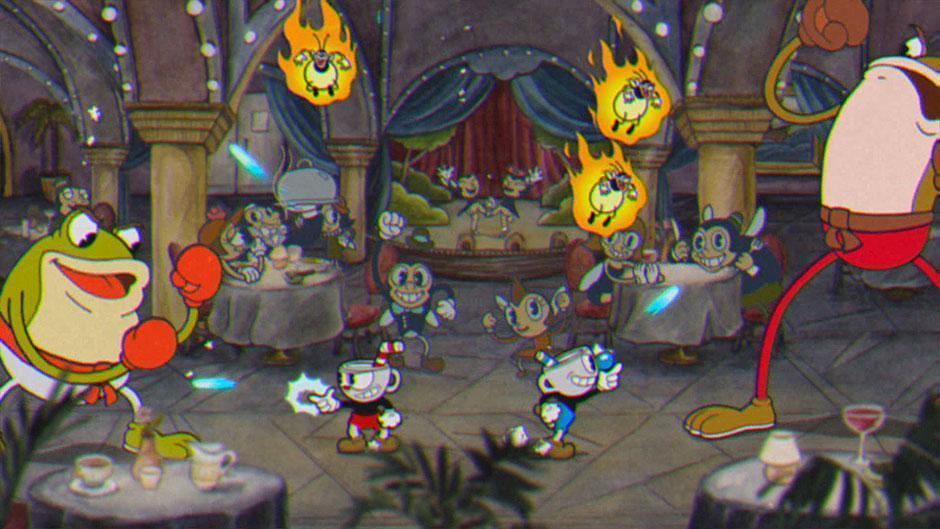 What makes Cuphead addictive is the fact that as you keep trying against these bosses, you’ll notice patterns and behaviors that you didn’t before. During each round, you’ll do slightly better than you did last time, making you think “one more round — I’ve got this!” The fights are merciless, but nothing about them is unfair. During every scene of every match there is that one place to stand, that one move to make that dodges the attack. You just have to find it through experimentation.

Cuphead and Mugman have four moves: they can walk, they can dash, they can fire (you’ll be holding down this button a lot), and they can unleash a Super Move that deals greater damage to the enemy. You can charge up the Super Move by continuing to deal damage; five Super Moves can be held in reserve. Winning fights depends on mastery of these four options and strategically thinking about when to do what. It won’t be obvious at first — no mortal human survives their first try.

Where Cuphead gets most frustrating is when you’re mastered the first two rounds of a fight, but aren’t familiar enough with the third yet, so you inevitably die and have to go through the motions of those other rounds again to get there, only to die again. It’s moments like this where you just have to take a break….or watch a YouTube video of the match if you’re truly stuck.

There are also a handful of sidescrolling levels on each island. Each level contains five coins to find, which can be used in a shop to purchase upgrades to your attacks. Your mileage may vary, but I actually found these stages harder than the bosses. The bosses become predictable eventually, but so much randomly comes at you in the sidescrolling stages that it’s hard not to dodge something while leaping directly into something else.

Cuphead has a one and a two-player mode. Playing with two players is a little easier since you’re hitting the bosses with twice the firepower, plus if one character dies the other can “tag” his ghost to bring him back to life. That move depends on timing, though, and if the enemy is throwing a lot of projectiles at you, it may not be possible.

Though there are only four areas in Cuphead to explore, the game will take you quite a while to beat because every fight takes so much time to win. Cuphead and Mugman can only take three hits apiece. You can expand your number of hits in the store, but not by much, and when you’re starting out you need to upgrade your firepower first. The mistake you must never make is to go into battle assuming you’ll win, even if you think you have the experience. Don’t get cocky; just enjoy the view. 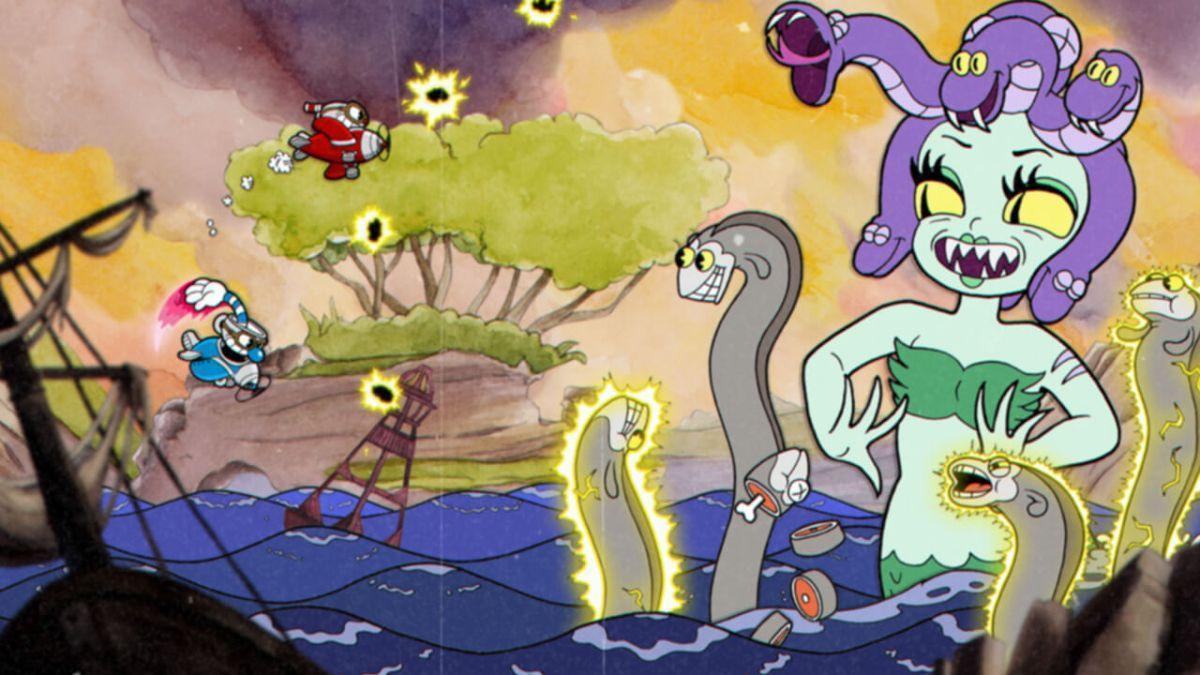 The visuals are what keeps Cuphead enjoyable even when the game is eating you for breakfast. The gorgeous animation never gets old to look at, and some of the boss strategies are crazily creative. A few of them pick from one of several possible attacks per round, keeping things unpredictable.

Nothing looks like Cuphead does, not only speaking in terms of the market today but in the 40-plus years of video game history. At least seven years of work went into creating it, and it was time well spent. Fortunately the gameplay supports the looks, featuring smooth controls and intense challenge. It’s been delayed for several years, but it was worth the wait. Now the problem becomes waiting seven more years for Cuphead 2.

Cuphead is available now for XBox One and Windows PC.