The dreary future landscape presented in Cartel 2045 by writer/director Chris Le doesn’t seem that different from our world today with one major exception, fully autonomous attack droids are the hot commodity on the black market. Yes, deadly robo-soldiers are at the center of this Mexican sci-fi military drama featuring a villainous, Danny Trejo, but do these promising parts combine to form a formidable film experience? Let’s rally the troops and find out.

When presented with the list of upcoming films available for review from the folks at October Coast there was no way I could pass up a chance to see the unforgettable Danny Trejo on screen again. Trejo’s presence has a way of elevating even mediocre films like the ill-fated Adrien Brody starring Predators from 2010 and even his brief cameo as the kindly hospital attendant in Rob Zombie’s Halloween remake resulted in a kill that brought home how dangerous Michael Myers truly was.

Of course Trejo’s headlining role in two Robert Rodriguez directed Machete films (with a tease for a third) were balls to the wall action fun which fans demanded based on the fake trailer included in the Rodriguez/Tarantino collaboration Grindhouse. The filmmakers behind Cartel 2045 were obviously part of the audience taking in that throwback theatrical experience in 2007, because the look of Grindhouse is all over this movie. But does it evoke the same trashy, fun feel of 70’s exploitation cinema? Let’s get into the plot before we dig into the nitty-gritty.

When a former soldier is turned war criminal thanks to a chip implanted in his head that can control now outlawed droid soldiers, he is released from prison for one last mission to rescue a kidnapped scientist from a homicidal Mexican drug lord in Juarez. After being teamed with a U.S. special ops unit, they uncover a world of deception and deadly technology that threatens more than just personal freedom in this war torn future.

As mentioned above, Cartel 2045 literally looks like a deleted segment from Grindhouse, with the filmmakers adding a battered film stock filter creating grain and pops that mimic the aesthetic of an old film reel that has been passed from theater to theater. There is also a heavy amount of desaturation, which removes any vibrant colors from the viewing experience in an attempt to give the film more of a visually interesting texture. These choices both help and hurt the film overall. 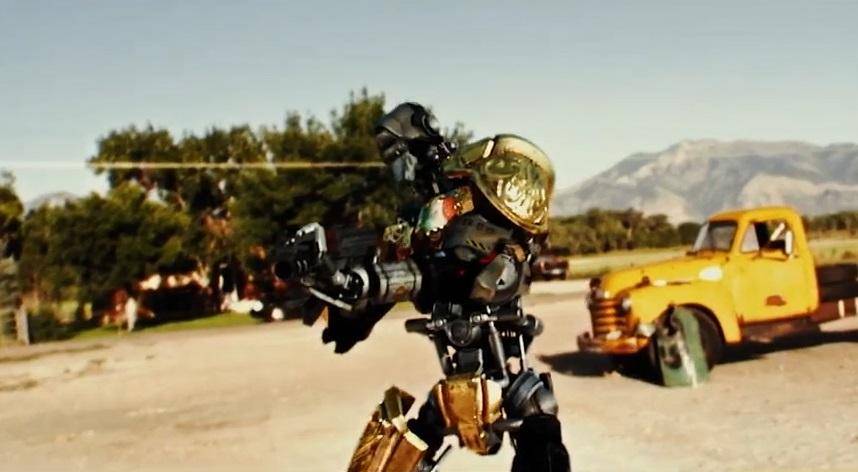 On the plus side, the CGI work on the droid soldiers is fantastic for an independent production, which was funded through Kickstarter as Juarez 2045. This is fortuitous since these metalheads get a lot of screen time and are at the forefront of the film’s plot. From the intimidating design of the droids to the shadows added that give these robots a sense of really inhabiting the space, the effects team should be applauded. The grindhouse filter definitely helps to hide any flaws that may have been more prominent in a crystal clear HD presentation. 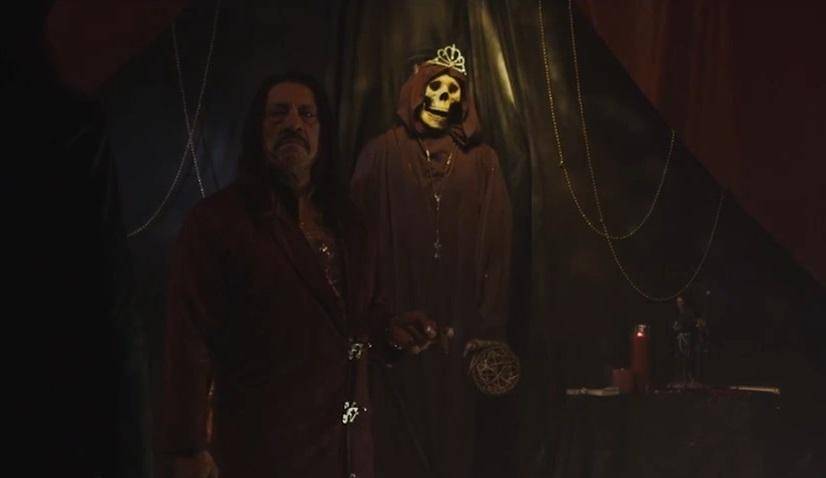 Danny Trejo as the film’s villain, Malvado, is also given some extra gravitas by the choppy visual texture that matches his iconically weathered face. Constantly (and comically?) shooting his henchman, while doing lines of cocaine, Malvado is presented as a ruthless “businessman” who worships at the altar of death. No, Literally. He has an a shrine set up where he makes offerings to and consults with to Santa Muerta or Saint Death.

Trejo isn’t giving an award winning performance, nor is the character written with much depth, but his gravely voice and intimidating glares are enough to get the point across. This is especially true in conversations with his second in command, Gabriel, played by Oscar Olivares, who also happens to be Malvado’s son. Evoking the look of John Lone’s Shiwan Khan from the 1994 Alec Baldwin vehicle, The Shadow (anybody with me on that reference?), this wanna-be cartel boss is constantly being chastised by his father for weakness in battle and failing to catch/kill the “Americano”. 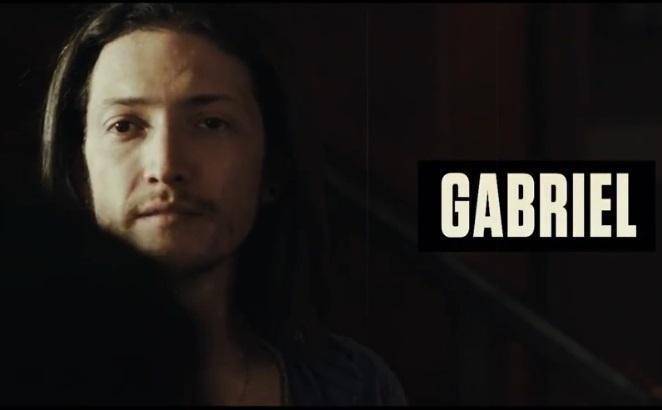 Olivares has the most to work with in terms of pathos, even at one point acting as savior to a captured woman, who is being held as motivation for her father to continue his work on Malvado’s secret weapon. You can see the conflict in the eyes of Olivares and how the character overcompensates for his own sensitivity with false machismo to appease his father. I personally would have enjoyed it more if Cartel 2045 had focused on the journey of the Gabriel character, as opposed to where the focus of the filmmakers ultimately lands. 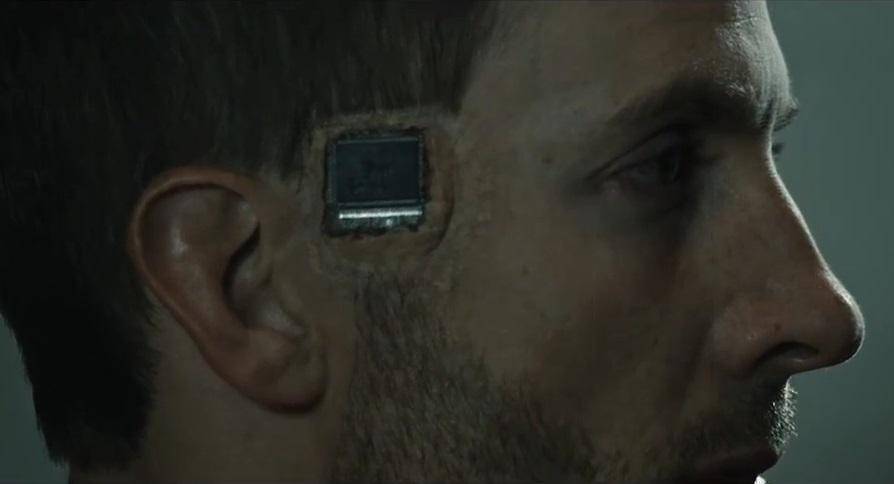 You see it turns out that everybody wants the not-so-micro chip fused to the side of Carson Wright’s head. Though military droids have been deemed too dangerous for use by the government, they are still a hot commodity in criminal circles and while employed by the military, Wright was given the ability to command an entire iron infantry with just a thought. After an entire village in Iran was decimated by his squad of steel, Carson was sent to prison, but now has been released on the condition that he rescue the scientist who implanted the chip in the first place.

Though Carson Wright’s story is full of tragedy and frustration, attempting to evoke a Nicolas Cage in Con Air motif, Brad Schmidt’s performance is just not engaging. The character is talked about as if he is Rambo, but comes off more like a high school gym teacher. Attempts at playing the character as a tortured loner fail, instead presenting a grumpy G.I. whose only characteristic is that he hates machines. So of course he is teamed up with an artificial intelligence program call A.D.A.M. that feeds him info on the battlefield through a contact lense and ear-piece.

This futuristic tech is provided to Wright by the nerdy outcast of this military unit, a bespectacled soldier named Luke played by Nathan Day. Constantly being laughed at for his attempts to join in the jocular banter of resident tough guys Chris and Stewart, fans of internet comedy legend Homestar Runner will likely be able to see the parallels of Reynold from Cheat Commandos in the character of Luke. It is also hinted at that Luke may be a “little rat” leaking information to Malvado before infiltration attempts, leading to several failed missions.

It’s during these invasion sequences into the cartel strongholds that we get the most blood spatter and brutality, but also where the modern filming style betrays the attempted Grindhouse aesthetic. The military action is more reminiscent of a Michael Bay film than the original Assault On Precinct 13 and as a result, the campy thrills provided by the 70’s guerilla filmmakers Le seems to be inspired by is lost. Luckily, there are several fun encounters with droids throughout the film, which act as the real highlights of Cartel 2045. 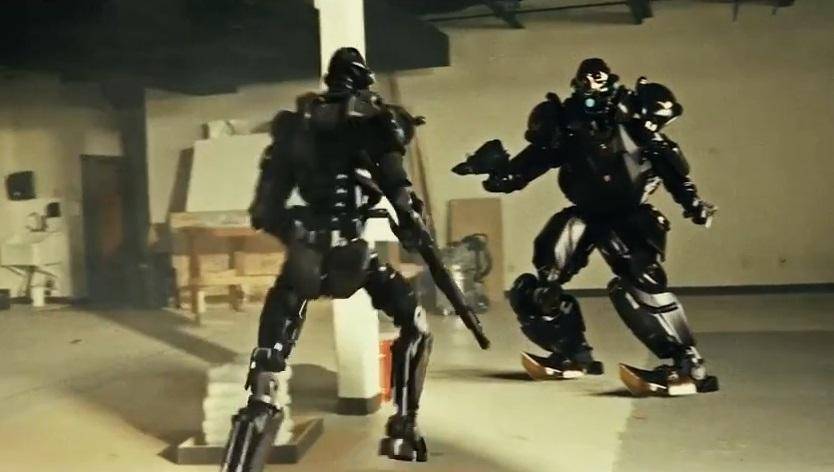 For example, when Wright goes to purchase a broken droid from a junk dealer, which is soon revealed not to be completely out of commission after all, a tense and well staged battle ensues. The effects work here is reminiscent of the Prawns from Neill Blomkamp’s District 9, where CG humanoid beings have a real weight and presence while interacting with the live actors. We also have fun later as A.D.A.M. inhabits that droid body and takes a newer, more deadly model of Malvado’s design. 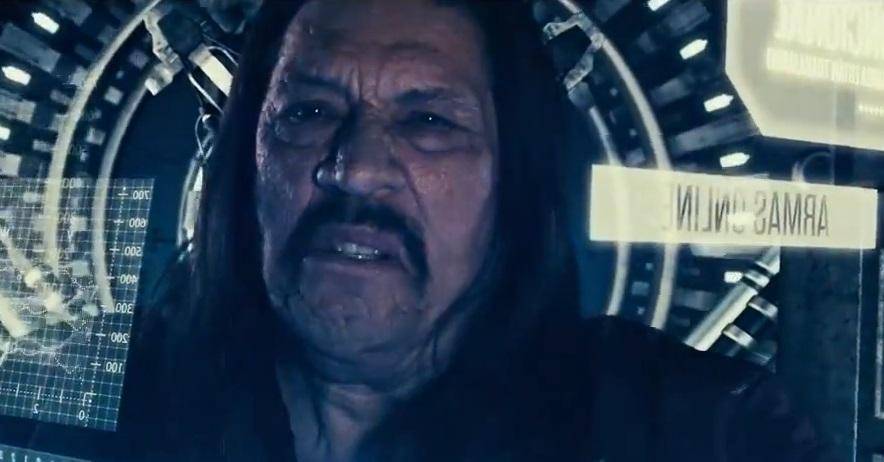 By the film’s end we take a turn into the realm of the original Iron Man, where Danny Trejo gears up in his own giant mech-suit to take on our jarhead protagonists. We finally get to see Wright make of use of his coveted head-tech to turn Malvado’s squad of droids against their maker, which feels like a decent enough payoff for all the build-up of the character’s reputation. Again, the CG effects work here in this final showdown is very convincing and provides a satisfyingly gory ending for the homicidal drug baron. 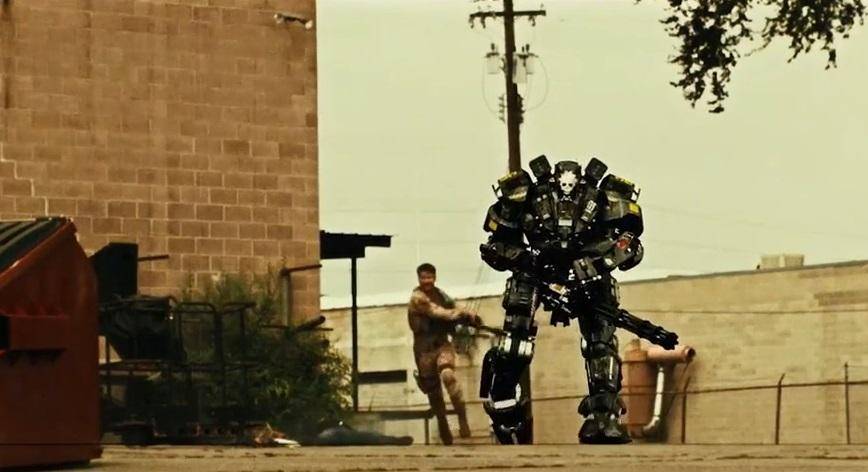 So how does Cartel 2045 shake out in the final analysis? I’m tempted to give the film a pass based solely on how impressively executed the droids are for such a low-budget feature. I’ve reviewed several other films of similar theme and scale who didn’t come close to this level of artistry. But the human cast is not handled nearly as well as the robots in terms of storytelling. The filmmakers never quite take the action to the extremes of the seedy z-grade films they’re trying to evoke. 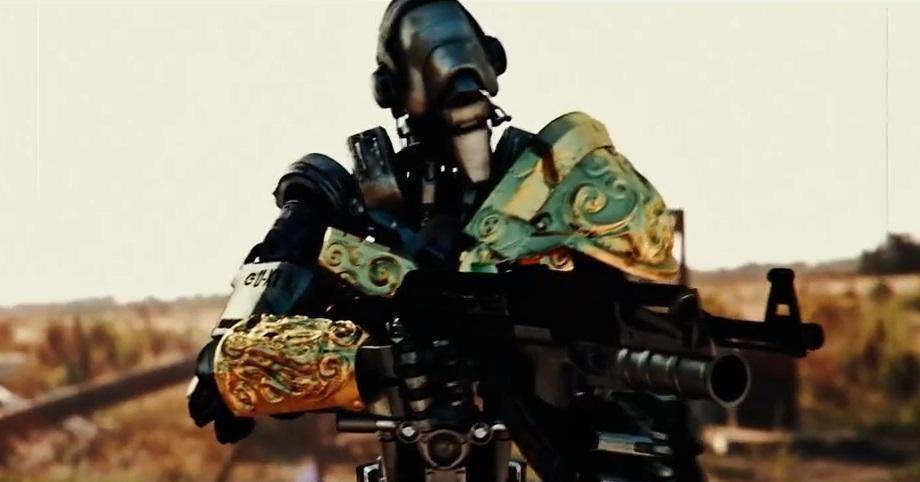 Cartel 2045 will give you some fun times watching strikingly rendered killer machines get in on the action against their human masters, so if that’s your sweet spot dive in. On the other hand, if you’re expecting the wild of adventure of Machete vs The Terminator, you may be disappointed with the less bombastic military subterfuge that fills out the film’s middle portion.

Starting this May you can find Cartel 2045 on VOD from October Coast and Uncork’d Entertainment.