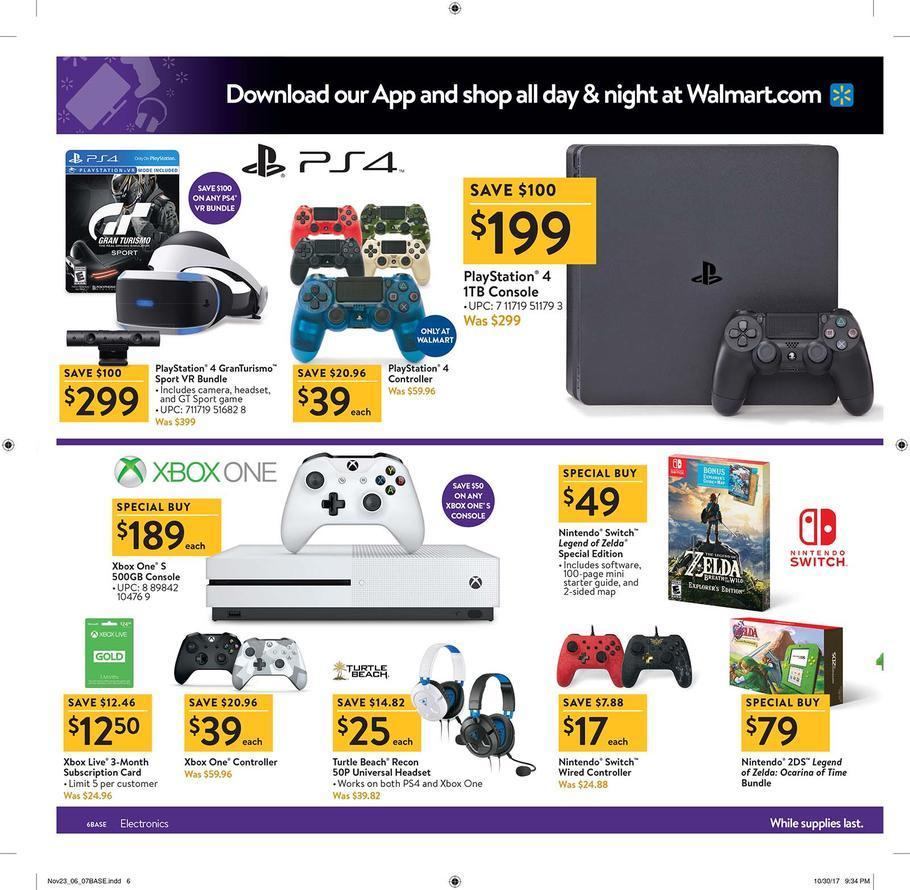 Wal-Mart is the next big box store to leak their Black Friday ad, so let’s see how cheap the games are there.

Like Best Buy and Target, Wal-Mart will also be selling the 500GB XBox One S for $189 (currently Target has the lead here with the addition of a $25 gift card). They’re also selling the 1 TB Playstation 4 for $199. However, Wal-Mart is the first store to date that’s offering a discount on the PS4 Gran Turismo Sport VR bundle — usually $399, on Black Friday it’ll be $299.

Wal-Mart also joins the outlets discounting PS4 and XBox One controllers to $40. A good day to buy controllers no matter where you are.

As far as games go, WWE 2K18, South Park: The Fractured But Whole, Uncharted: The Lost Legacy, Crash Bandicoot: N-Sane Trilogy and Need For Speed Payback (which just came out today) are all $30. PS4 Skyrim, Forza Motorsport 3, Rayman Legends for Switch, Horizon Zero Dawn and Injustice 2 are all $20. Dishonored 2, Watch Dogs 2 and Just Cause 3 are only $12, and Wal-Mart even has some leftover XBox 360 games they’re trying to unload for $9.

Now here’s something we haven’t seen any other retail outlet do yet: an honest-to-goodness sale on an in-demand Switch game. Yes, Wal-Mart is discounting Breath of the Wild by $10 and throwing in a mini-guide and two-sided map. And we mean the Switch version — they’re not pulling a fast one by offering the Wii U version.

Rumour: Beyond Good And Evil 2 Releasing This Gen?

Deep Into The Secrets Of AI: The Somnium Files

Call of Duty: Black Ops – In The Jungle (Annihilation) Trailer

Call of Duty: Ghost – Into The Deep And Riley Single-Player...