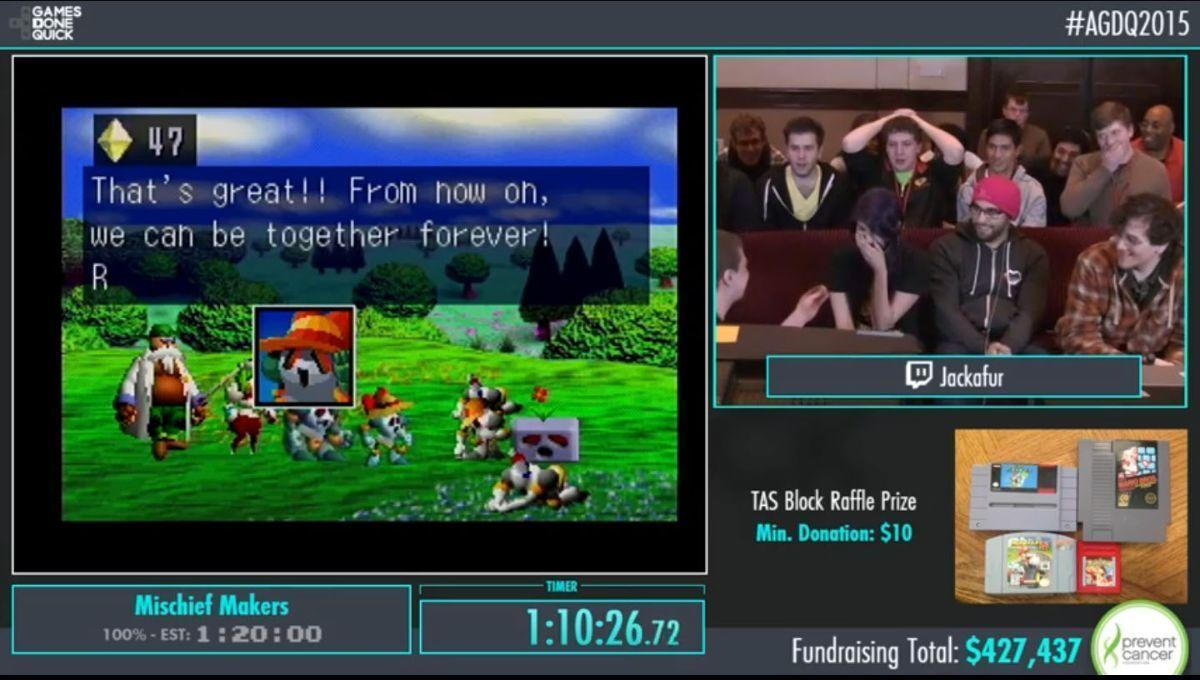 Awesome Games Done Quick is a weeklong charity event that has been running for the last two years in which some of the Internet’s best and fastest players plow through the most popular games live, as quickly as they possibly can, for the Prevent Cancer Foundation. This year’s marathon raised over a million dollars and had plenty of great moments for those watching live, but for those who didn’t, most of those moments have been archived on the AGDQ YouTube channel. Since watching them all would literally take a week, here are the highlights:

The race through Banjo-Kazooie was one of the first taken and one of the most interesting. They spent about three minutes in each world and got everything.

I Wanna Be The Boshi is an amateur game, starring tons of ripped sprites, created by someone whose brother complained that notoriously hard platformer I Wanna Be The Guy was too EASY. Watch the player zip through some of the hardest areas ever witnessed, like an entire room covered in spikes with a path barely wider than the player’s figure.

I’m unfamiliar with the mechanics of exactly what is going on here, but a special program is being used to hack into the physical Pokemon Red cartridge, then into the Super Game Boy it’s plugged into, then into the Super NES itself….causing the game to run the Twitch chat window that was running alongside the video.

If it wasn’t great enough that Mischief Makers was in the lineup, at the end of the game the player got on one knee and proposed to his girlfriend. The text boxes in the ending sequence matched up nearly perfectly with what was going on.

There is much sequence breaking in the run of Majora’s Mask. The player uses various glitches to collect the items out of order and skip major events.

The Portal games get the award for “Most Dizzying Video,” at least among the runs I watched. As you might imagine, the kinds of shortcuts you can take by thinking with portals are insane. (Start at 1:04:04 and 2:05:27)

I thought I’d seen (and played with) every glitch Ocarina of Time had to offer, but this guy showed me a few new ones — and they have hilarious consequences.

Finally, watch and scream as this dude plays through the first half of Ocarina…..blindfolded.