Shakedown Hawaii Getting A Wii And Wii U Release

Last year VBlank Entertainment released Shakedown Hawaii, their sequel to the nutty 80s-themed Retro City Rampage…a top-down shooter adventure modeled after the first GTA game and flavored with endless 8-bit gamer in jokes. Shakedown Hawaii, released in 2019, is more of the same but with more options.

Last year VBlank released Shakedown Hawaii on PlayStation 4, Nintendo Switch, Nintendo 3DS, PlayStation Vita, and PC. They’re working on the rest of the platforms, but before they ever get to XBox One, they want to make sure they get it on Wii first.

No, we’re not kidding. VBlank has announced both Wii and Wii U releases for Shakedown Hawaii, and they’re physical ones to boot. In the case of Wii, it’s their only choice — its digital marketplace was shut down in January of 2019.

In fact, you can’t even print a Wii disc in North America anymore…but you still can in Europe, so VBlank went with that. 3,000 PAL copies of Shakedown Hawaii will be made available for Wii on Thursday, July 9 at 1 PM Eastern / 10 AM Pacific. 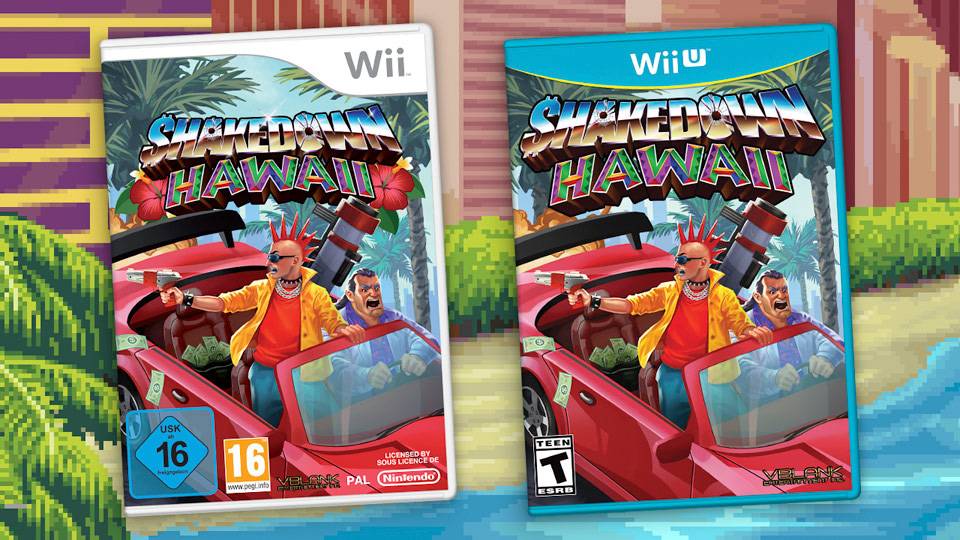 The Wii version supports both 50hz and 60hz, and both NTSC and PAL output. It supports the Wii Remote (with shake!), Wii Classic Controller, Wii Classic Controller Pro, and GameCube Controller. I took special care to ensure it parallels the experience of the more powerful platforms, and further optimized it to fit entirely into the Wii system memory. This means that you won’t experience any disc load times during gameplay. Once the game boots, you’re in!

A Vblank, by the way, is the time between which a CRT television’s cathode ray gun finishes drawing one frame of animation and moves up to the top to start drawing the next frame. A CRT can do this sixty times in one second so a Vblank is a very small period of time, yet enough to send an entire set of instructions to an NES console on what to show in the next frame. Fascinating, eh? Now you know something.

We have yet to find out how many copies of the Wii U version there will be, but VBlank Entertainment plans to sell them sometime in August.