If you missed the first part of this article, you can find it here. There you can read about the people who inspired the creation of Ryu,Ken,Sagat,Zangief and Crimson Viper.

Sean Matsuda’s big sister just debuted in Street Fighter V but she is already popular to cosplayers.
Kyra Gracie is the inspiration for the creation of Laura Matsuda. Here is Laura’s early concept together with a picture of Gracie. 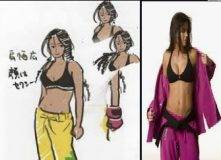 Kyra is the only female Martial artist from the Gracie clan. The last name Gracie is familiar, because they invented Brazilian Jiu-Jitsu. Her Street Fighter counterpart wanted to spar warriors around the world, so she can promote her family’s Martial Art, Matsuda Jiu-jitsu. They change her costume with the colors of the Brazilian flag because she is Brazilian. The designers also made her Afro-Japanese Brazilian because they made her the sister of existing Street Fighter Sean.

Fans are confused about Balrog’s name swapping with Vega and M.Bison because those three switches name between US and Japan. To summarize the explanation, watch this video because it explains it better than me.

To make it short, Capcom designed Balrog after Mike Tyson. The name M.Bison make it so obvious and Capcom got afraid that he will sue them for using his appearance without his permission. He actually don’t mind even though the fictional boxer namely Balrog is patterned after him. On this Interview he felt flattered that Balrog is him only virtual so Capcom should have not done the confusing name swaps.

The video above is a homage to the main event of Wrestlemania III. Alex and Hugo are homages to Hulk Hogan and Andre the Giant. 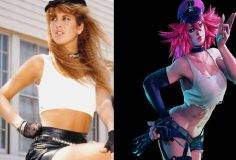 Poison is originally a Final Fight character but she is now an official Street Fighter when she debuted in Street Fighter III. She is Street Fighter’s first transwoman. Her gender is a debate among Street Fighter community but her early concept design and lore confirms she is trans. Jeanne “Hollywood” Basone is a pro wrestler from the 1980s. She is one of the roster of Glow. Her character Hollywood is a Juvenile delinquent gang girl. Poison and her pallete swap Roxy are both conceptualized from her. 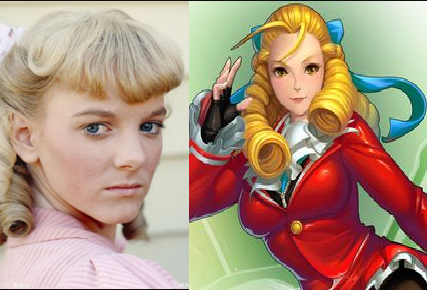 Action stars and martial artists are the most used blueprint for the characters on this list. Karin is different because her existence is because of a child actress.

Alison Arngrim played Nellie Oleson. She is the villain of Little House on a Prairie. An American Historical drama from the 1970s that gained popularity in Japan. Allison Anglim’s portrayal becomes Japan’s template for a Japanese trope called Ojousama. A snobbish rich girl with blonde ringlet curls with a classy laugh. Not All Ojousama are villains. As a matter of fact, Karin is the main heroine of Street Fighter V.

Street Fighter : Real People that Inspired the creation of the characters Take A Look at The New “Superman & Lois” Super-Suit