One of the most popular type of indie titles are puzzle games. Perhaps it is because of the fact that they are not considered mainstream enough for AAA developers to bother with and that they are rarely considered value for money as full retail releases. Whatever the case, the likes of the ID@Xbox program have given creators the chance to reach a large enough audience to justify making puzzle games once again. Nebulous joins the ranks of the genre as a physics-based puzzler that sees players guiding an astronaut through a series of ever more complex levels.

As you might expect from this type of game, the story isn’t the main focus. You start off with the astronaut, a person named Dash Johnson, being sucked into wormhole and transported to an unknown region of space. Without the ability to move himself anymore, the protagonist relies completely on the player to move him around the levels and get him to his next destination. Alongside some witty banter from Dash as he tries to make sense of his surroundings and encourage or mock you, that is as far as the plot goes.

What Nebulous is really about are the puzzles. Each levels has a collection of items that can be picked up and moved around. These include jump gates, conveyor belts, rocks, and teleporters. The goal is to have Dash get from the start point to the end using just these items and the obstacles presented in each level without being killed or getting stuck. The early parts of the game are predictably rather easy as they guide you through the various mechanics on offer but soon become increasingly more complex. 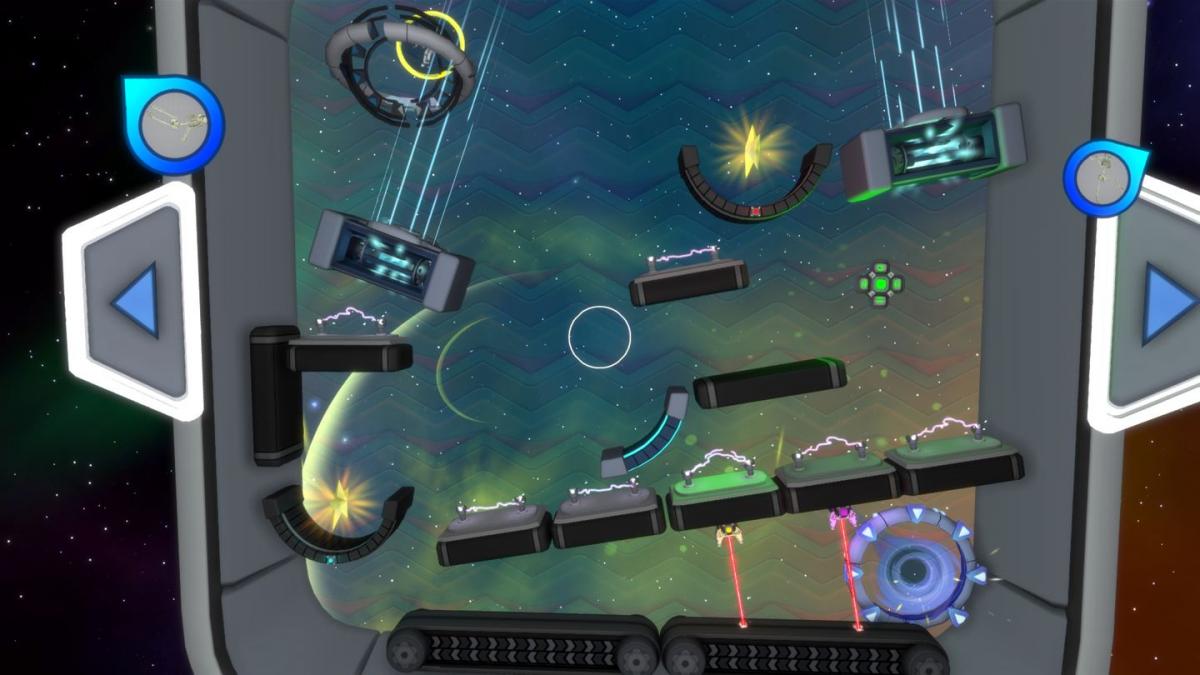 This manifests itself in several ways. Firstly, the obstacles themselves simply become harder to navigate and predict, meaning that you have to think carefully about how exactly you place each object. Even more difficult, though, is the fact that later levels begin to use more than one side of the cube that the game takes place on. This not only extends the levels but also adds more depth as you have to work out how you will travel between the different sides and how the physics, such as gravity, will work in this new area.

Solving these can be quite a challenge but the satisfaction from finally beating a level usually outweighs any frustration built up to getting there. While getting to the end of a stage will allow you to move on to the next part, there is a score system that tracks how long you took and how many times you died. Up to three stars can be awarded in each level and you’ll need to 100% every stage to get most of the achievements.

There are some serious shortcomings with Nebulous that make it more of a chore to play than anything else. The learning curve is incredibly steep, with new items constantly being introduced without any warning. They will often fundamentally change the way in which the game is played, yet nothing is done to introduce them to the player or explain how they work. Instead, you simply have to use trial and error to understand what each new item does. This makes some of the later levels incredibly annoying as you can struggle for an age before realizing that a certain item has an unknown ability. 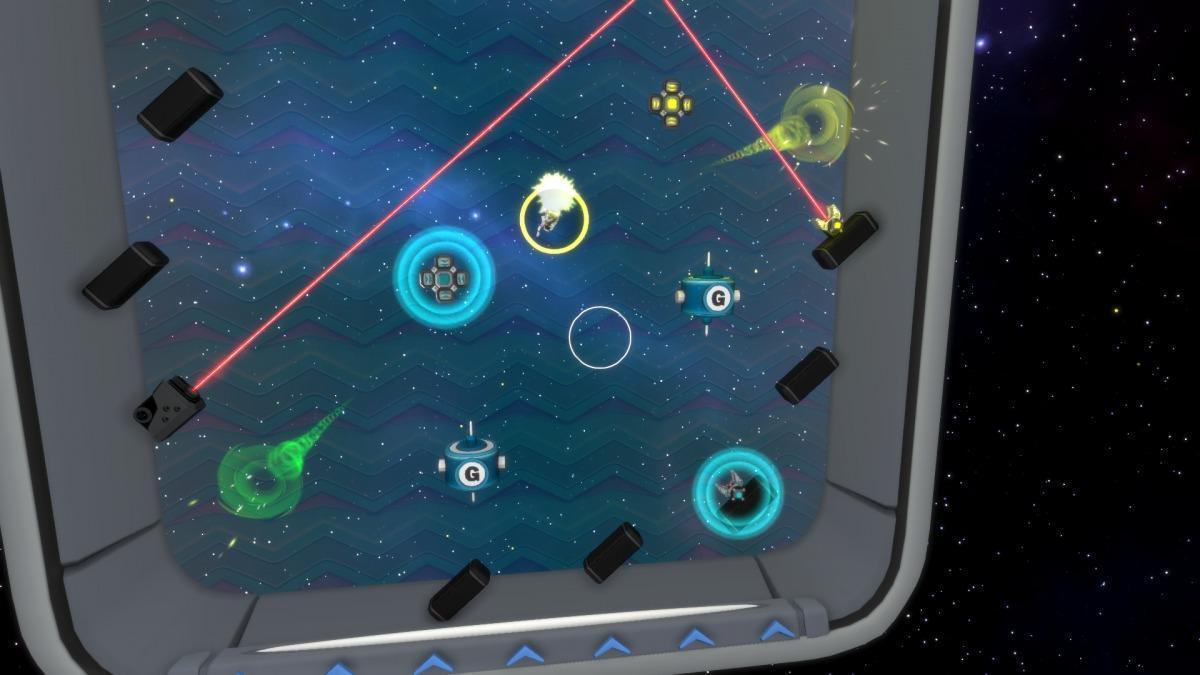 This trial and error approach to the game is not helped at all by the controls. To get Dash to his destination often requires a very precise touch as items will need to be in exact locations to work properly. Unfortunately, picking up and moving objects is anything but precise. It is clear that this game was meant to be played with a mouse rather than a controller as it just has not been worked to allow for the different inputs provided by thumbsticks. Items will often jump a significant amount of space or refuse to go exactly where you want for seemingly no reason, leading to levels having to be constantly reset so you can get the three stars on offer.

These problems can also be compounded by some visual issues. The physics seem to work incorrectly at times, forcing items to glitch and move around by themselves. The screen tearing at the sides of levels also makes it increasingly difficult to be precise. The graphics themselves are not particularly impressive either, with the same background used throughout the game and the items having a rather low-res look to them. 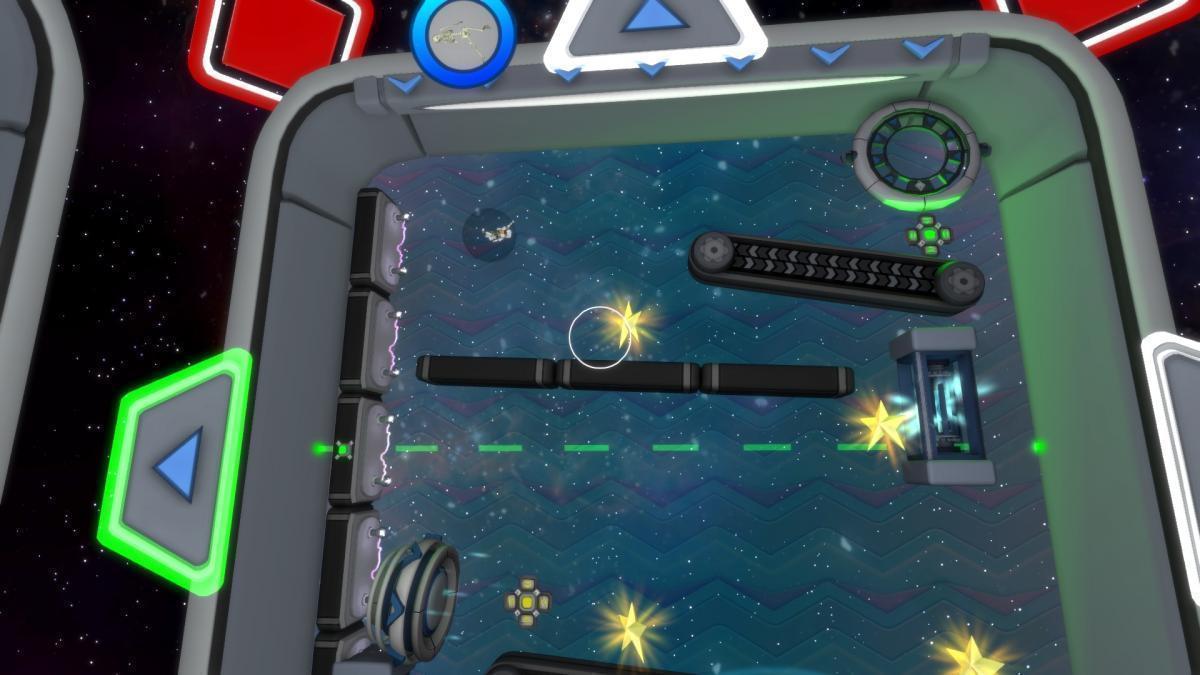 The sound design is a bit better. There are some rather interesting and pleasing sound effects used as Dash bumbles through the various stages, using the items to transport. Problematically, these effects are severely limited and do not offer enough variety. When combined with the rather dull soundtrack, which is composed of just one rather dull track, the audio does very little to keep you engaged with the game.

While it has some interesting concepts and presents some very well done puzzles, Nebulous misses the mark too often to be considered a good game. The $15 price does very little to help it in this regard, as the short campaign and trial and error gameplay just does not provide enough value to justify such a high price. Hardcore fans of puzzlers might want to check it out, but most players would be probably better served with other examples of the genre.

This review is based on a copy of the game provided by the developer for review purposes. Nebulous is available on the Xbox One for $15.