With NESMaker currently in beta early access form (open as of August 8, $36), the once arcane task of crafting new games for the Nintendo Entertainment System will soon become much easier. These two projects currently being funded on Kickstarter, however, began before there was any such thing as software assistance.

The folks behind Dullahan Software coded up Nebs ‘N Debs completely from scratch, using the raw 6502 Assembly code — quite the formidable task. In this game you play as Debs, an astronaut searching for a way off a distant planet. Nebs happens to be the squid-thing that attaches itself to Debs’s head. He’s both a curse and a blessing: he can help Debs gather the crystals she needs to synthesize fuel.

Two years in the making, Nebs ‘n Debs contains 12 unique levels, a run-jump-dash gameplay mechanic, and a hard mode (they emphasize “HAAAAAAARD”) that can be unlocked after beating the game once. it will be released digitally, but since this is a Kickstarter campaign, you can also get a physical copy that works in a real NES. Only for a limited time, though!

At the same time as Nebs ‘n Debs, another team of primitive NES coders have launched a campaign for THEIR project, Micro Mages. Morphcat Games is the name of a two-person dev team from Berlin, and they’ve crafted a 26-level, eight-world platformer with 100% unique content. Four players can play this game using the NES Four Score accessory, available at your neighborhood eBay. 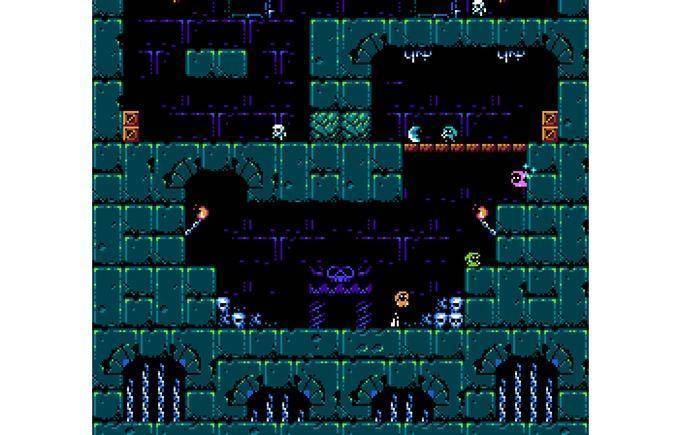 The most amazing thing about Micro Mages is that Morphcat Games electively went for even more limitations than necessary. The entire game is squeezed into a 40KB ROM — in other words, the size of the smallest NES games ever released, the ones coded back in 1983 for the launch of the Famicom. Yet the game doesn’t look limited at all!

Both these projects have busted their original funding goals, and both have plenty of time left on their clocks — but don’t dawdle, because they won’t be around forever. Support Nebs “N Debs here, and support Micro Mages here.