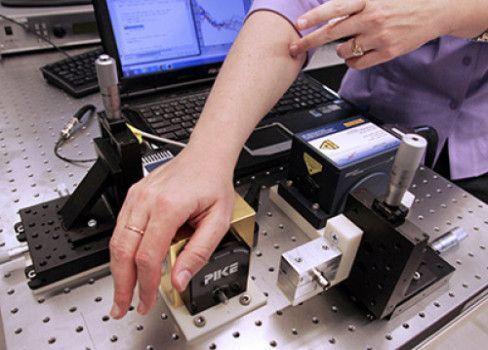 For those of you that are lucky enough not to have to deal with it, diabetes means a lot of sore fingers.

Diabetics have to routinely draw blood to test their blood sugar. My poor grandmother sometimes has to prick her fingers several times a day with a spring-loaded lancet, which leaves them raw and sore. It’s a pitiful scene.

And I know that she’s hurting, because I’ve recently developed diabetes symptoms and had to start pricking myself. You don’t always get the blood the first time, sometimes you have to do it more than once. And since I’m not a free bleeder I have to set the lancet launcher to “Vlad the Impaler” deepness to get enough blood to work with. As a person who types for a living, I can tell you that banging away at a keyboard with recently punctured fingers is a woeful way to work.

So when Princeton University Researchers say they might be able to offer a way to take the blood sugar reading with a laser without wounding yourself, I say “Yes please!”

“We are working hard to turn engineering solutions into useful tools for people to use in their daily lives,” said Claire Gmachl, the Eugene Higgins Professor of Electrical Engineering and the project’s senior researcher. “With this work we hope to improve the lives of many diabetes sufferers who depend on frequent blood glucose monitoring.”

The laser device is aimed at the diabetic’s palm. The rate in which it passes through the sugar molecules in the person’s body is used to determine the blood sugar levels. It’s about 84 percent accurate even in the prototype stage. That’s slightly worse than conventional glucose monitoring techniques but researchers are improving the accuracy.

The system does not use a conventional “near infrared” laser like current medical devices. Those types of lasers operate just beyond the frequency of human site and aren’t practical for detecting blood sugar because they interact with various acids and chemicals in the human skin.

Instead it uses a new but a new type of laser called a quantum cascade laser. Unlike traditional lasers where the frequency is set by the material used to create the laser beam, quantum cascade lasers can be “tuned” to different frequencies and can more easily create a higher powered “mid-infrared” laser that interacts with sugars but not other components in the body.

Unfortunately the current system is very big, large enough to fill an entire workbench, but the researchers are working on shrinking it.

“This summer, we are working to get the system on a mobile platform to take it places such as clinics to get more measurements,” said lead author of the paper,Sabbir Liakat. “We are looking for a larger dataset of measurements to work with.”