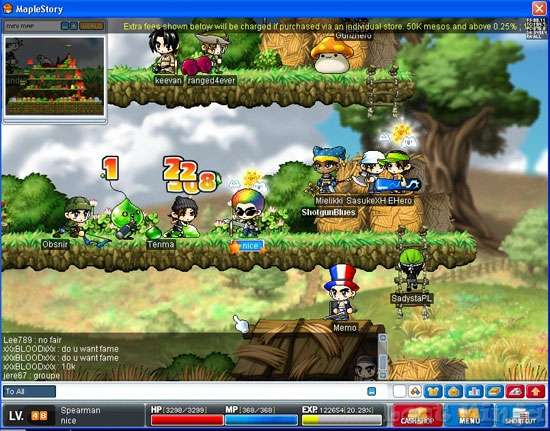 Press Release:
It has been quite the eventful summer for Maple World as ‘Chaos’ continues to roll out massive content updates to Nexon’s side-scrolling action MMO, MapleStory. To conclude the Chaos series, Nexon has announced the Age of Triumph, a huge update that brings unique content exclusively to those players who traverse Maple World on Global MapleStory servers.

A new adventure lies in the Age of Triumph, bringing players an entirely new story line called the Silent Crusade. This full length quest for players level 37-110 introduces a battle force that specializes in eliminating Master Monsters, a faction of enemies never before seen in MapleStory. Throughout their journey through the Silent Crusade, players will be introduced to new NPCs that will aid them along their quest, including one character that will grab the hearts of players seeking a new romance. The Silent Crusade will be narrated through colorful, action-packed in-game cutscenes and through tandem battles with NPCs.

Beyond the hours of new gameplay included with the Silent Crusade, the Age of Triumph will also introduce the Global MapleStory exclusive Capture the Flag mode, a new game type added to MapleStory’s PVP mode. Three to six players in two teams will fight for their opponents’ flag, and the first team to do so three times is declared the winner. Item drops, including speed ups, power ups, HP recoveries and more will aid players throughout the battle, along with additional points and medals for players that exhibit the actions of a true strategist.

Players can also check their inventory to find the Crusader Codex, an essential rolodex of the various monsters that roam Maple World. To complete their collection, players will need to collect Monster Cards by defeating enemies. When certain pages are filled with the cards which display monster information, including levels and item drops, players will receive special prizes that reflect the completion of the book. Medals, ranging from Beginner Collector to Legendary Collector, will be awarded to players along with huge HP and MP power ups.

MapleStory is available to download and play for free at: http://maplestory.nexon.net.