PopGeeks recently had the chance to speak with Ediogames communication director, Nicolas Eskenazi, who served as the game designer for the new indie game release for Steam, The Ultimatest Battle. The new release is a free-to-play, competitive 2D real-time arena shooter that features a mix of elements from strategy, shooter and arena brawling games akin to Worms, Team Fortress 2 and Super Smash Brothers. Eskenazi took some time to talk with PopGeeks about why The Ultimatest Battle is the anti-“Pay to Win” game to check out.

PopGeeks: What would you say was the “ultimate” goal in the conception of The Ultimatest Battle?

Nicolas Eskenazi: Ediogames was created by a team of friends enthusiasts of video games, we wanted above all realize a game “by gamers, for gamers”. Our goal was to create a new concept based on principles that players are already used to, for an instinctive handling and a maximum of fun. Being ourselves players we wish that UB transmits our “gamer’s ethic”, that is why we emphasize the fact that our game is a Free-to-Play, and absolutely not a pay-to-win. The success of a victory will depend mainly on skill and teamwork. From a more personal point of view: it’s an incredible adventure to create a video game from scratch, and it’s definitely an accomplishment for everyone involved in its development.

PopGeeks: Would you say the final product achieves what the team at Ediogames set to make?

Nicolas Eskenazi: We are rather happy with the current state of the game, whether its balancing level, or its playing opportunities.
The first feedbacks since our Steam release are essentially positives, which is a huge satisfaction as creators. We were able to federate a community, meet our players to share with them and build UB’s future in continually improving it. Our players find in UB the co-operation aspect of a MOBA without having to go into half an hour games where, 9 people will curse them if they disconnect in the meantime. Of course we still have a lot of content we intend to achieve, to continue to improve the game as much as possible.

PopGeeks: What is the perspective from an independent game developer working with Steam as a release partner? Would you say Valve’s Steam service has been a game-changer for the indie gaming community in having such a platform to release indie games?

Nicolas Eskenazi: It is undeniable that the visibility provided by Steam is unmatched. Essentially so for Freeto-Play, permanently sought after and easily accessible. One of the advantages to being self-published on Steam is that the next titles that we will be editing will be subject to fewer controls before to be validated by Valve. Especially on the administrative aspects relating to the studios not residing in the United States, which have discouraged more than one studio. Our Steam release immediately attracted the attention of many players who quickly occupied the game servers.The visibility of Steam today is sadly lower compared to the highlight that there was at the time of the “GreenLight”, since the arrival of the “Steam Direct” much more games come out daily, and all can’t be equitably put forward. However achieving such visibility without Steam is virtually impossible for a small studio with too few resources to communicate on its product. We therefore advise broadly other indie studios to take advantage of all that Steam can bring
them. 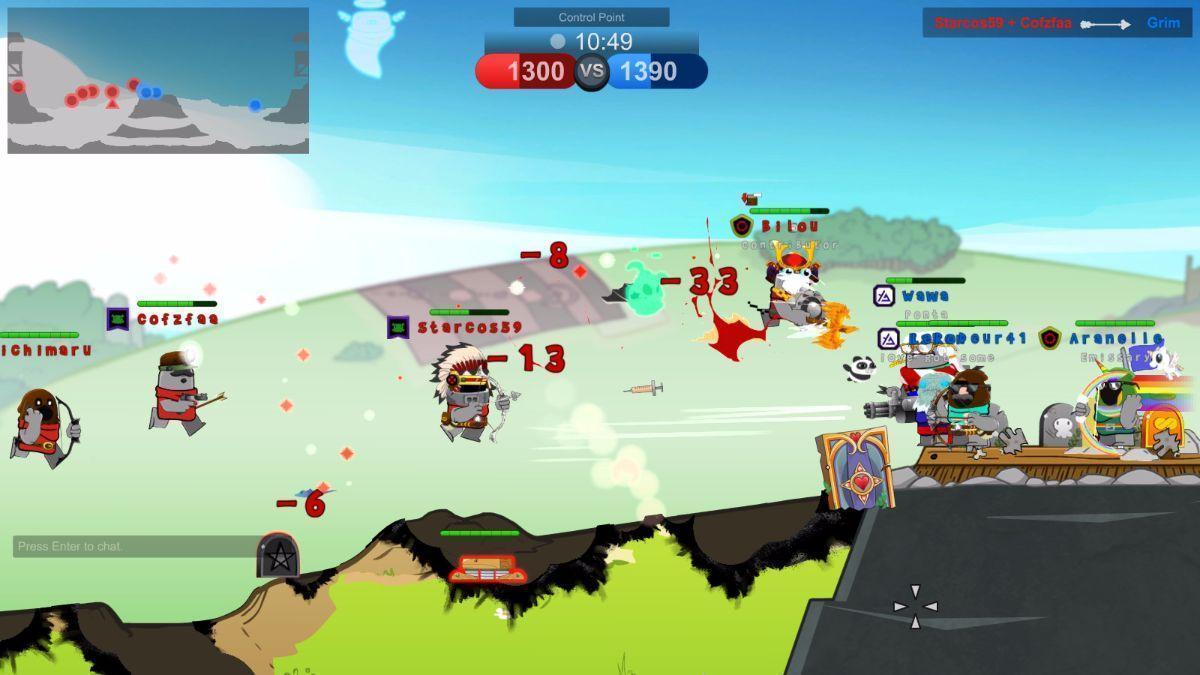 PopGeeks: Would you say a console release is possible for The Ultimatest Battle is possible for PlayStation 4, Xbox One or the Nintendo Switch? Have there been any offers yet, or will it mainly hinge on the game’s overall sales on Steam?

Nicolas Eskenazi: We’re not against the idea, we’d like to see gamers of all platforms playing together no matter if they use a console or their PC/Mac. We have already been contacted by some profiles who seemed interested in getting our game on consoles, but asked us to reach several hundred thousand registered before consider us as “possibly interesting”. It should be noted that the “Free-to-Play” status is not the most appreciated by publishers. Indeed, in addition to the problem of “acquisition”, a F2P needs sufficient “retention” to ensure sufficient traffic and that the model remains profitable. As an indie studio it has already been quite difficult to get enough traffic for games to be played constantly (thanks Steam), our fear in relation to a console release is to start again at
zero at the affluence level. The best way for UB to be on a console is to be able to ensure that the players computers
and consoles can mutually confront each other. So it’s not part of our plans for the next few months, but it’s not excluded 🙂

PopGeeks: The main creatures of The Ultimatest Battle are called Nubs. And they look like little nub things. How would you describe these creatures further and the world in which they live?

Nicolas Eskenazi: Nubs are small beings with gray skin, but they are cruelly lacking in gray matter. They are not surprised by anything, and can go from a medieval setting to a futuristic world without being shocked. Nubs are not aware of being in a game, yet they know that they do not risk dying once in a while, the respawn is an integral part of their daily lives. Nobody really knows why the reds and the blues make war: it is said that their conflict is only due to color preference.

PopGeeks: I really like the game’s 2D animation style. Were there are there any artists or styles in particular that inspired the game’s fun visual and dynamic look?

Nicolas Eskenazi: We have voluntarily introduced a cartoon aspect to our universe and our characters. It’s no secret that our gameplay was inspired by, among other things, the Worms universe, and we wanted to honor this license with several references in our game. Our game graphics are often compared to the world of Ankama (Dofus), our animations are made under Flash and some of our artists worked at Ankama, this comparison is also legitimate.

PopGeeks: The Ultimatest Battle has a nice variety of gameplay modes. Are there any other gameplay modes that are in development and might be added for a future update?

Nicolas Eskenazi: Of course! We are continually working to improve our game, and continue to anticipate a lot of content
for the future: new gameplay, new maps, in-game events, game modes, and even another
class.

PopGeeks: From a development standpoint, what would you say was the greatest challenge in tackling and completing this project?

Nicolas Eskenazi: The fact of being a very small team, and being until now totally self-financed, is a constraint both in terms of production and communication. I think that developing an online game has been both our greatest strength and our greatest
difficulty:

Then in terms of traffic: realizing a game entirely in PvP necessarily requires players permanently connected, which has not always been the case during our first years of development.

Since our arrival on Steam our servers have never been empty, in addition to the overall positive feedback we have received: this is by far our greatest accomplishment since the opening of our prototype to the public.

PopGeeks: In the official press release for the game, you described The Ultimatest Battle as an “anti-pay to win” game. What do you think that means, and do you think “pay to win games” are starting to become a major problem? Also, do you have any specific examples that you think exemplify this problem?

Nicolas Eskenazi: Being ourselves players, it seemed inconceivable to us to create a game that would favor one
player compared to another with the money spent in game. More and more games are choosing this model, which has become enormously democratized with mobile games. When it concerns a personal evolution of the player, it may be justified, but this seems to be a serious mistake when the players are competing against each other. For us it is an ethical problem, the real life is unfair enough for the players to undergo these same inequalities while playing. To know if a title is a pay-to-win just ask this question to a longtime player:
“If I’m new to this game, and I’m spending $1000 on my arrival, will I become stronger than you?” If the answer is yes, it is a pay-to-win, and many players will be so frustrated that they may risk to quit the game if they can not match a spending player.

We believe that the logic of pay-to-win games is to rely only on frustration to always make people pay more, at the risk of losing a significant number of players. Yet experience has shown that a “real free-to-play” can satisfy the free players, while finding
its base of players who will spend a lot, mainly for fun and not frustration (Dota2 is an excellent example of a very profitable model, staying 100% fair for all types of players ). The principle of a “non-pay-to-win free-to-play” is that the most spending players pay to allow free players to fully enjoy all the features of the game, without necessarily needing to go through the store.

PopGeeks: In terms of player fairness, how do you believe The Ultimatest Battle handles in-game
purchases better than other “pay to win” titles?

Nicolas Eskenazi: Our desire was clearly to create a game “by gamers, for gamers”, although UB could be played equally well by casual players as by hardcore gamers. Easy to play, hard to master, where skill and teamwork are more important than equipment,
and situations more and more wacky: this is our desire since the launch of the project. Almost all our items are available for sale, but all that belongs to the gameplay can be obtained very quickly while playing, and in general no weapon is supposed to be stronger
than another: an advantage in a statistic necessarily includes an equivalent penalty. We therefore mainly monetize cosmetic items, or weapons possessing a “kills counter”. UB is often compared to a mix between Worms and Team Fortress 2: at the economic model
level we are extremely close to TF2.

Thank you to game designer Nicolas Eskenazi for taking the time to speak with us. Ediogames’ The Ultimatest Battle is now available for Windows PC via the Steam Service.