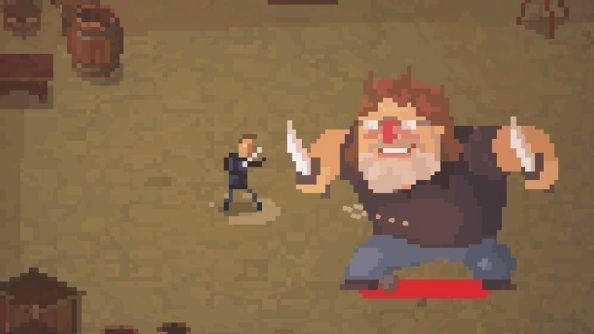 Legendary game developer and the owner of Valve, Gabe Newell, is set to appear in a video game as an extremely powerful boss. The team behind the dungeon crawler Crawl have confirmed that Valve has officially given permission for their boss’ likeness to appear in the game as the super powerful enemy that will only be able to be defeated by the very best players.

Developer Powerhoof originally asked for permission from Valve about whether they could use the likeness of Newell in their game after the GIF image showing the boss battle went viral. Fearing that the company might not be pleased with the inclusion he sent the following email:

I am writing to ask permission to use your likeness in my video game. I recently realized my silly fantasy of animating you as a powerful god in the game. You can view a GIF here: http://imgur.com/w6HAVEH.gif

This ended up reposted by some games websites, so it seems only proper to ask for your permission. If you find this low-res incarnation of yourself objectionable, I will of course not put him into the game. I have a few points for your consideration before making a decision:

1- You will be the most powerful character in the game, effectively building a perception in Crawl players that you would be a formidable opponent in combat. This would surely reduce the desire to battle you among our players, barring edge cases in which the player is incredibly powerful himself and is looking for a worthy opponent.

2- The transformation implies your more recent bearded look is actually your Super Saiyan form (see http://dragonball.wikia.com/wiki/Super_Saiyan) Once again, this inflated perception of your combat abilities (in this case having your power multiplied by 50) should serve as a deterrent to Dragon Ball fans who may also have planned to battle you, but who fear being annihilated by a Super Saiyan energy attack.

3- I will of course supply images of myself to enable your retaliatory usage of my likeness into your own video games.

4- I know the guy who made the art for Crossy Road, and I can ask him to put your favourite animal in the game, even if it’s a wolf!

If you’re still not convinced then of course I will respect your wishes, but please keep in mind any time spent battling your likeness in a game of Crawl, is time not spent making terrible jokes about Half Life 3. If you see no problem with use of your likeness, do you have any requests for what you’d like him to do for his spawn or death animations? It seems only fair to let you choose 🙂

Thanks for your time

[Thanks to Rock, Paper, Shotgun]